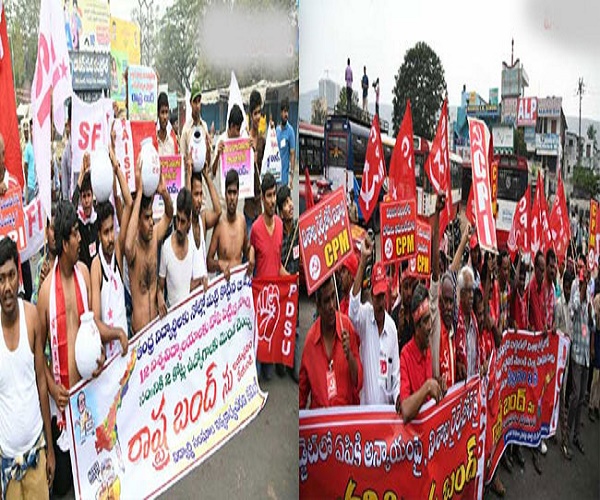 Authorities in Andhra Pradesh have tightened the security in view of the shutdown called by the Left parties today to protest the injustice meted out to the state in the Union Budget 2018-19.

The ruling Telugu Desam Party (TDP) has also called for protests across the state to express solidarity with its MPs, who have been trying to stall the proceedings in both the Houses of Parliament to demand justice to the state.

The government has declared holiday for schools as a precautionary measure. Police have made elaborate security arrangements to prevent any untoward incident.

Director General of Police M. Malakondaiah has directed Superintendents of Police in all districts to take all measures to maintain law and order. The officials in districts have been asked to take precautionary measures to protect public property and also keep a tight vigil.

ALSO READ:  ‍Luqma Studio - A Place For Muslim Women To Unwind In Hyderabad

Earlier, TDP president and Andhra Pradesh Chief Minister N. Chandrababu Naidu asked his party lawmakers to continue the protest till a categorical announcement from the Centre. Though Union Ministers Rajnath Singh and Ananth Kumar spoke to Naidu over phone, urging to advise his lawmakers to cooperate during the Prime Minister’s speech, Naidu made it clear that the protest will continue, TDP sources said.

Actor-politician Pawan Kalyan said the movement to get justice for Andhra Pradesh should be on the lines of the movement for separate Telangana state. The Jana Sena party chief remarked that two placards and four slogans will of no use.

ALSO READ:  Students Elections Is Not A 'Popular Mood' Of The Nation As Thier 'Understanding' Differs!

He recalled that at the time of the state’s bifurcation, then Prime Minister Manmohan Singh had announced in Parliament that special category status will be accorded to Andhra Pradesh. Mr Pawan said he had hoped that this commitment will be fulfilled after PM Narendra Modi formed the government at the Centre but this did not happen.