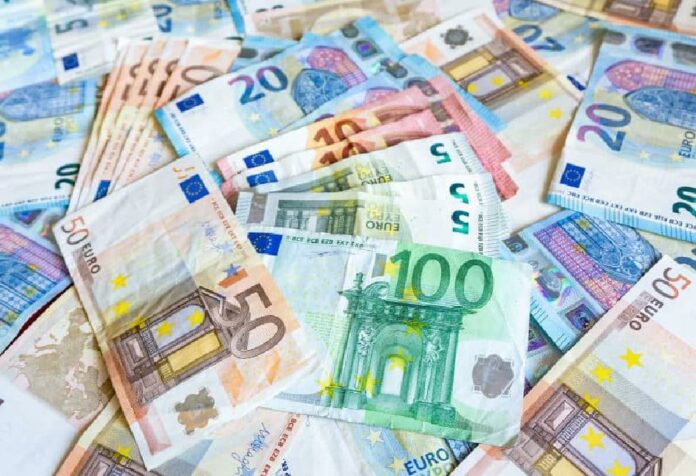 The United Nations recognises around 180 currencies as legal tender but which one holds the most value? Read ahead to discover the 16 strongest currencies that are used on a daily basis in 2021 and exchanged in forex trading.

To compare the value of the currencies, we have used the United States dollar as the fixed base currency. The strongest currency here is defined as the one that is the most expensive in comparison to the US dollar. That is, the currency that gives you the smallest currency return for 1 US dollar. 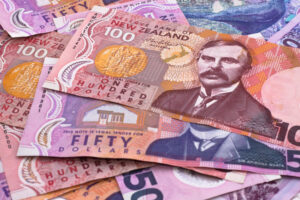 16. New Zealand dollar
The NZD (New Zealand dollar) makes its rightful place on the strongest currency list at number 16. The strength of this currency has been rising, most likely caused by the nation’s political stability, high interest rates and GDP growth.

In exchange for 1 US dollar, you will receive around 1.52 New Zealand dollars. Even though the NZD is the 16th strongest currency in the world, it beats many of the stronger currencies and lands a top 10 place in the most traded currencies. In particular, the GBP/NZD currency pair is a popular choice on our trading platform. 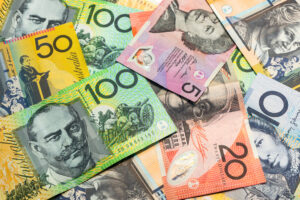 15. Australian dollar
The Australian dollar (AUD) is the national currency of Australia; it is also used by its external territories and some pacific island states. Although it is not the most expensive currency in the world, it is extremely valuable and one of the most stable currencies on this list.

1 US dollar will get you around 1.45 Australian dollar, making it one of the most expensive currencies available. The Australian dollar is also the 5th most traded currency on the forex market and accounts for around 6.8% of daily trades. Some reasons for why the AU dollar is so popular includes the currency’s stability, its high-interest rates and the view that it holds diversification benefits.

Do you think the AUD will climb the rankings or drop off the list? You can trade the Australian dollar based on your speculations with a risk-free forex trading demo account, where the AU dollar and many other crosses such as EUR/AUD are available to trade with virtual currency. 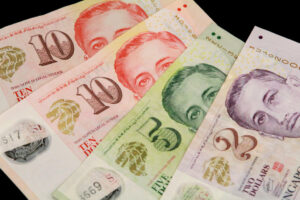 1 US dollar will buy you around 1.36 Singaporean dollars. The Singapore dollar is an expensive currency that is the 13th most traded currency on the foreign exchange market, accounting for around 1.8% of daily forex trades​.

13. Brunei dollar
Brunei dollar or BND has been the currency for the Sultanate of Brunei since 1967. The Brunei dollar is interchangeable with the Singapore dollar at face value and both currencies are legal tender in each country.

1 US dollar will exchange for around 1.35 Brunei dollar, making the BND slightly more expensive than the Singaporean dollar. 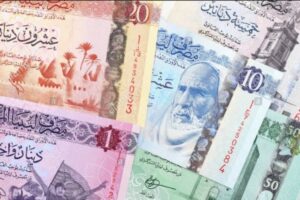 12. Libyan dinar
The national currency of Libya is known as Libyan dinar or LYD in its abbreviated form. Interestingly, a single dinar is subdivided into 1000 dirham, unlike the sub-measurement of 100 that many other currencies follow.

A single US dollar will buy you around 1.41 Libyan Dinar. Although LYD is not the most valuable currency in the world, it is still a very strong currency. 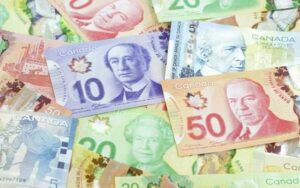 11. Canadian dollar
The Canadian dollar or CAD is the currency of Canada and is one of the most popular currencies for central banks to hold as foreign exchange reserves, due to Canada’s legal and political stability. Additionally, CAD is a very popular option when forex trading, and accounts for around 5% of daily trades in the global foreign exchange market.

A single US dollar will purchase around 1.31 Canadian dollars, placing it 11th in the world’s strongest currency list, but its global popularity precedes its value. View our live price charts for popular currency pairs featuring the Canadian dollar, such as GBP/CAD and CAD/JPY to get started. 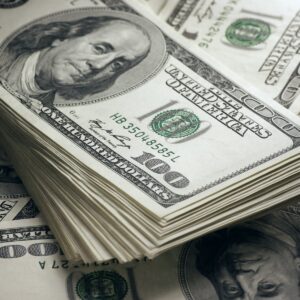 10. United States dollar
The US dollar is the currency of the United States and several other countries. It is the world’s primary reserve currency and is held by most central banks and commercial banks globally. Because of its widespread adoption, the US dollar also accounts for around 88.3% of daily trades in the foreign exchange market.

The US dollar holds many first-place titles, including the richest country in the world, but remarkably only comes 10th when ranked as a contender for the world’s strongest currency. All currencies on this list are compared for their currency strength relative to the US dollar. Therefore, the US dollar appears at 10th position, as 1 US dollar is worth exactly that – 1.0 US dollar. Read more about trading our US dollar index, which is a basket of currency pairs with the USD as the base currency, such as USD/CNH.

Examples of more exotic dollar crosses that are available to trade on our platform include USD/RUB (with Russian Ruble), USD/TRY (with Turkish lira) and USD/ZAR (with South African Rand). 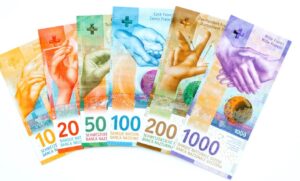 9. Swiss franc
The Swiss franc or CHF is the national currency of both Switzerland and Liechtenstein.

1 US dollar will buy your around 0.98 Swiss Franc, so the Swiss franc comes in as the first currency to be higher value than the US dollar. This, however, is no surprise given that Switzerland is one of the most stable and wealthy countries in the world.

The Swiss franc is also the 7th most traded currency in the world, gaining its popularity as a safe bet when trading or storing currency, due to its strict monetary policies and low debt levels. 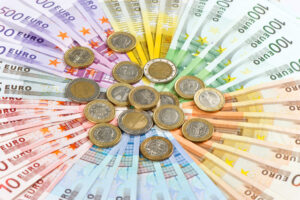 8. Euro
One of the newest currencies, the Euro or EUR is the official currency of 19 countries, which makes it the most widely used ‘official currency’ in the world. Countries where it is used as an official currency include Germany, France and Spain, and it is often known to be the world’s second reserve currency. It is also known to be the second most traded currency on the foreign exchange market only preceded by the US dollar. In fact, the EUR/USD or ‘Fiber’ is the most traded forex pair in the world, accounting for almost a quarter of daily forex trades.

In exchange for 1 US dollar, you will receive around 0.90 Euro, or 90 cents. This makes it the strongest currency in the list so far, and the 8th strongest in the world. 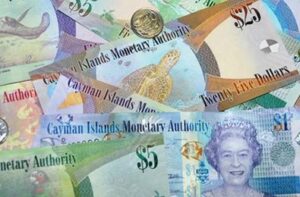 A United States dollar is exchangeable for around 0.83 Cayman Islands dollar- making it the only and strongest Caribbean currency on the list.

6. Gibraltar pound
The Gibraltar pound or GIP is the national currency of Gibraltar and is exchangeable with the British pound sterling at face value. Therefore, in Gibraltar, you are free to use both GIB and GBP.

A single US dollar will buy you around 0.81 Gibraltar pounds, which is very similar in value to the pound sterling. 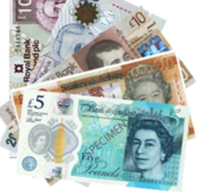 ALSO READ:  Why Pandemic Pushing To Rely On ‘Immunity-Boosting’ Brands And Home Remedies?

When exchanging a single US dollar, you will receive around 0.75 Great British pounds in return. This currency pair (USD/GBP), is commonly known as “cable” and is the 3rd most traded currency pair in the world. More exotic but still popular crosses involving the pound sterling include the GBP/RUB (with Russian Ruble) and GBP/TRY (with Turkish lira). 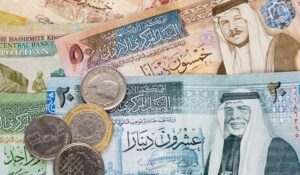 4. Jordan dinar
The national currency of Jordan is the Jordanian dinar or JOD, which earned the position as the 4th strongest currency in the world today. The currency became Jordan’s official currency in 1950 after it replaced the Palestinian pound.

1 US dollar is transferrable for around 0.71 Jordanian Dinar, earning the currency a rightful place in the top 5 most valuable currencies. 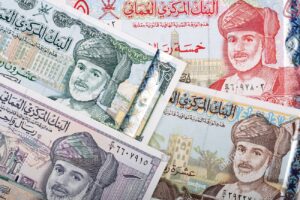 3. Omani rial
The Omani rial or OMR is the national currency of Oman. Unlike most conventional currencies, the Omani rial is split into 1000 smaller divisions known as baisa. The Omani rial quickly rose in value after being introduced due to the success of Oman’s oil exports and being pegged against the US dollar.

A single US dollar will exchange for around 0.38 Omani Rial, which is nearly double the currency strength of the Pound sterling! 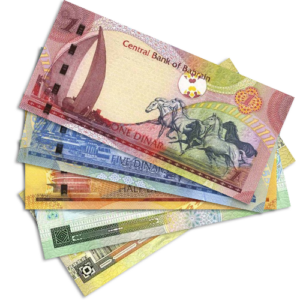 2. Bahrain dinar
The second strongest currency in the world is the Bahrain dinar or BHD. Like most Arabic currencies on this list, it is divided into 1000 smaller currency units, in this case, called ‘fils’. The Bahraini dinar is only used in Bahrain and is pegged against the US dollar.

Of similar value to the Omani rial, when trading 1 US dollar you will receive 0.38 Bahraini dinar. 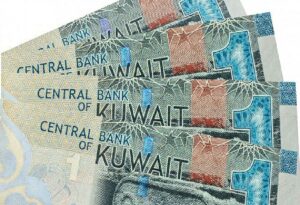 1. Kuwaiti dinar
Known as the strongest currency in the world, the Kuwaiti dinar or KWD was introduced in 1960 and was initially equivalent to one pound sterling. Kuwait is a small country that is nestled between Iraq and Saudi Arabia whose wealth has been driven largely by its large global exports of oil.

You will receive just 0.30 Kuwait dinar after exchanging 1 US dollar, making the Kuwaiti dinar the world’s highest-valued currency unit per face value, or simply ‘the world’s strongest currency’. #KhabarLive #hydnews