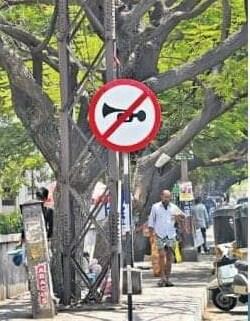 Steady rise in vehicles, boom in construction activity lead to crossing of permissible noise levels. From complaints of garbage, bad roads and overflowing drains, residential areas in Hyderabad now have one more thing to be worried about. Noise pollution in the city is on a steady rise.

Data from TSPCB shows that noise levels in Jubilee Hills between May and November months last year were in the range of 57 to 63 decibels (dB) during day time and 53 dB to 56 dB in night time. This was against permissible limits of 55 dB and 45 dB in day time standard and night time standard respectively.

According to road safety experts, with the increase numbers of four wheelers, frequent honking, and bustling lifestyle, the noise levels took a rise in residential areas too. Apart from growth in vehicle population, the loud boom in construction activities in residential areas in the recent years, have been added to rise of noise pollution levels, experts said.

Gachibowli which falls under ‘Sensitive area’ category, continues to witness high noise pollution levels. For a permissible noise limit of 50 dB in day time, noise levels recorded here are in between 57 dB and 63 dB in May-November.

Noise levels in this area are on rise particularly in night time in the same period recorded 52 dB to 62 dB against 40 dB of night time standard due to heavy vehicular movement in and around IT corridor which include Madhapur, Hitec City and Gachibowli.

Commercial areas such as Abids and JNTU, the average noise levels in both night time and day time are above permissible limits. In the busy area of Abids, the average noise levels during May-November stood around 69 dB to 72 dB during the day while it was 68 dB to 71 dB in the night. For a commercial area, the day time standard and night time standard is fixed at 65 dB and 55 dB respectively.

Interestingly, it is only in industrial areas like Jeedimetla and Sanathnagar that the noise levels are below permissible limits. The average noise levels in Sanathnagar were 68 dB and 65 dB against 75 dB and 70 dB during day and night time standard respectively. #KhabarLive