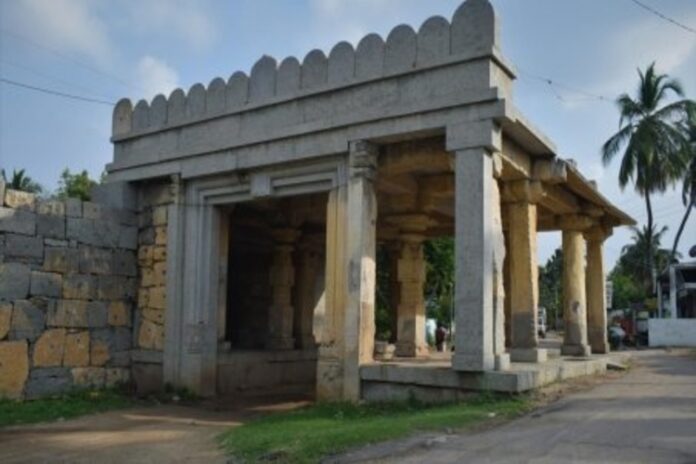 Sugriva, be careful, you may fall!” Those words immediately caught our attention and piqued our interest. We were on a boat on the river Tungabhadra and these words made us turn towards the subject to whom they were addressed. Years of exposure to the Ramayana had so conditioned us that we expected to see a huge and hairy half-man, half-monkey, but what we saw was a skinny and dark boy not more than six or seven years. This was Sugriva who lived in the village of Anegundi on the northern banks of the Tungabhadra.

Anegundi was previously known as Kishkindha and the village was also the first capital of the Vijaynagar empire. Kishkindha, for those not too familiar with their Ramayana, was the forest kingdom where the two brothers, Sugriva and Vali, lived and fought.

According to mythology, it was in Kishkindha that Lord Rama met Sugriva and Hanuman, and that incident changed the course of the narrative of the Ramayana, of course the rest is history or mythology.

Sugriva gave us a broad smile and we were flummoxed to find that he had a brother, too. And of course his name had to be Vali, which it was!

However, a visit to Anegundi is like walking into the pages of mythology and discovering a whole new and fascinating world.

Valmiki’s Ramayana is divided into seven parts known as khandas or kandas, namely Adi Kanda, Ayodhya Kanda, Aranya Kanda, Kishkindha Kanda, Sundara Kanda, Lanka Kanda, and Uttara Kanda. Of all these sections of the epic, the Kishkindha Kanda is arguably the cornerstone and turning point of the epic. The incidents narrated in this section are believed to have taken place in and around present day Anegundi in Karnataka.

A bridge spans River Tungabhadra and connects the southern and northern banks, Hampi and Anegundi on either bank, stand as weathered pages of history separated by the flowing waters of River Tungabhadra. The distance of about 20 kilometres from Hampi to Anegundi is covered in quick time. There is also a quicker option of crossing the river on a coracle, depending on the water level.

ALSO READ:  The Glam And Glory Of 'Banjara Hills' In Hyderabad

As you drive towards Anegundi, green paddy fields crowned with droplets of water glisten against the backdrop of majestic rocks. The rocks themselves are intriguing sculptures carved by the hands of nature with the chisel and hammer of time. These rocks probably hug millions of years of history in their wide bosoms. The quiet and sleepy village of Anegundi is where mythology and history have woven a fascinating web. It is said to be the home of one of the oldest plateaus existing on earth going back an astounding 3,000 million years. A place with stories waiting to be told behind every rock and inside every cave.

As you drive into Anegundi, a lone sentinel in the form of the statue of the iconic emperor of the Vijayanagar empire, Krishnadevaraya gazes down at you. A small road skirts what was once the stone entrance to Anegundi and known as Modaline Bagilu in Kannada which simply means, “first gate”. The Modaline Bagilu is a stone structure supported by pillars, there are small raised platforms on either side. A lone stray dog slumbers in serene siesta on one of these. Parts of the wall made of stone blocks that once enclosed the town is visible on the other side of the entrance.

At a distance of about a little more than a kilometre is located the famous Durga Temple of Anegundi. A drive amidst rocky terrain leads to the base of a hill. Steps cut into the rocks lead up to the temple. Within a few minutes one arrives at the old temple where the kings of the Vijayanagar empire used to offer worship before heading out to war. The temple itself is a riot of colours with a huge tree festooned with colourful bits of cloth tied by devotees. The priest asks us to partake lunch, which is served for free everyday. We politely decline and trudge past the temple in our quest for Kishkindha.

We walk past a few women who are washing vessels from their just-concluded lunch and take a rocky path that heads up the hill. A local who works in the temple volunteers to lead the way and we follow him. The path soon leads to a small doorway set in the middle of an imposing fort flanked by two turrets. In the centre, above the small entrance is a balcony with three protruding windows, reminiscent of the ones at the Gagan Mahal, a 16th century structure being renovated that we saw as soon as we entered the Anegundi village. “This is Vali’s Fort,” says our unsolicited guide. We smile and follow him through the entrance.

Strange rock formations, one resembling a massive human face flanks us on our right. Towards the left were some tombs. “These are the tombs of the family members of the royal family of Vijayanagar empire”, says our self-styled guide, gesturing expansively. A rectangular pond, shines in emerald hues towards our right, as we make our way forward.

An ancient Ganesha temple built into a rock is our next halt. The temple has a cave that runs behind its posterior. This cave is known as Vali’s cave. We follow our guide inside the cave, it is dark and damp inside and we are thankful for whoever thought about incorporating the torch feature in mobile phones.

The entrance to the cave is from one side of the temple and you emerge on the other side. Inside the cave are huge boulders that form a wall to one side. It is believed that behind one of these huge boulders, the underground passage extends much further. Legend has it that the mythological character of the Monkey King Vali chased a rakshasa or demon called Mayavi deep into the cave while his brother Sugriva stood guard outside. A long and epic battle ensued. Blood started flowing out of the cave. Sugriva, thinking that Vali had been killed, used his superhuman strength to close the cave with a massive boulder and returned home. It is believed that the cave in which the duel between the rakshasa and Vali took place was behind the boulder in the cave that flanked the ancient Ganesha temple.

ALSO READ:  Do You Know The Untold Story Behind The Popular Breakfast Cereal?

The path from the Vali cave to the summit of the hill got rougher and rockier, but we were rewarded with a magnificent view of the Pampa Sarovar below us. It is believed that it was this lake that enraptured Rama who arrived here in search of the kidnapped Sita. In the distance we can see another hill on which is situated a Hanuman temple known as Anjanadri. This is believed to be the birthplace of Hanuman. It is in the vicinity of this region that Rama and Lakshman met Sugriva and Hanuman, a turning point in the Ramayana.

From the summit we follow our bare-footed and nimble guide and descend into what looks like a hole between the rocks. Sometimes sliding, sometimes crawling, and some time thankfully using the available iron railings we reach an underground temple where a sage named Subramanyeshwara stayed and an ant hill formed over his body when he was in deep meditation. The ant hill is worshipped in the subterranean temple.

We head back and once again cross the fort entrance. We look back at the imposing structure. A few monkeys look at us curiously from the top of the turrets of the fort. As we leave the fascinating world of Kishkindha, we wonder if they would know more about the story of Vali and Sugriva.

Anegundi has so many more treasures to explore, gems from history and mythology scattered all around. These include the Gagan Mahal, Ranganatha Temple, 64 Pillared Mantapa, Huchapparayana Matha, and not to forget the sacred Nava Brindavana and much more. But these have to wait for another day when we return again to a living museum where different chapters of history and mythology converge to create a fascinating mosaic. #KhabarLive #hydnews