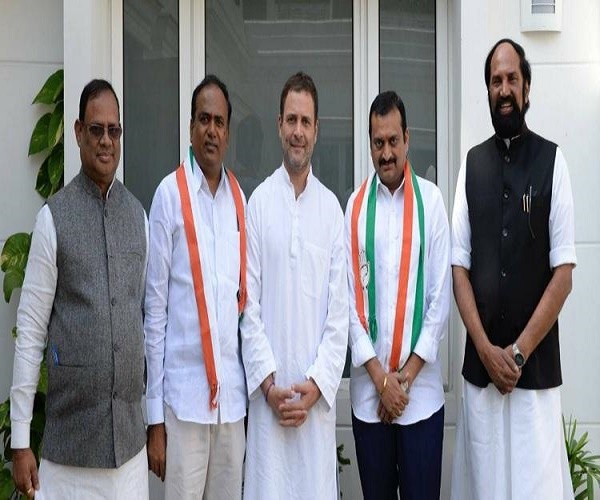 Bandla and Bhupathi were accompanied by Telangana Congress affairs in-charge RC Kuntia and PCC chief Uttam Kumar Reddy along with several other top leaders from Telangana. While Bandla Ganesh is a popular face in the Telugu film industry, he has called himself a hardcore fan of the actor-turned-politician Pawan Kalyan on several occasions. He had reportedly met with Rahul Gandhi two months ago.

In December, Bandla made news after a slug fest with YSRCP MLA Roja on live TV. In January, he and his brother were booked under the SC/ST (Prevention of Atrocities) Act for allegedly abusing a doctor.

Bandla Ganesh is likely to contest from Shadnagar constituency, where several of his business outlets are located. In May 2017, Bhupathi’s son Snehith Reddy was arrested in a rape case along with three others in Hyderabad.

RC Bhupathi Reddy, who hails from Nizamabad, defected to the Congress claiming that the TRS leadership humiliated him by not giving him importance. Speaking to the media, before joining the Congress, Bhupathi came down heavily on the TRS and its leader, K Chandrasekhar Rao.

Bhupathi Reddy said, “People gave power to TRS thinking that they will get the Telangana that they aspired for. But whatever is happening for the past four years is completely against the hopes and wishes of people.”

He alleged that the true Telangana activists are being silenced and confined for questioning the party. While the MLC was accused of anti-party activities, he was not officially suspended from the TRS.

Bhupathi had earlier announced that he would contest against TRS’ Bhajireddy Govardan, who was given a ticket for Nizamabad rural constituency. Bhupathi is likely to have the support of Rajya Sabha MP D Srinivas (DS), whose relationship with TRS leadership has soured following allegations of “anti-party activities”.