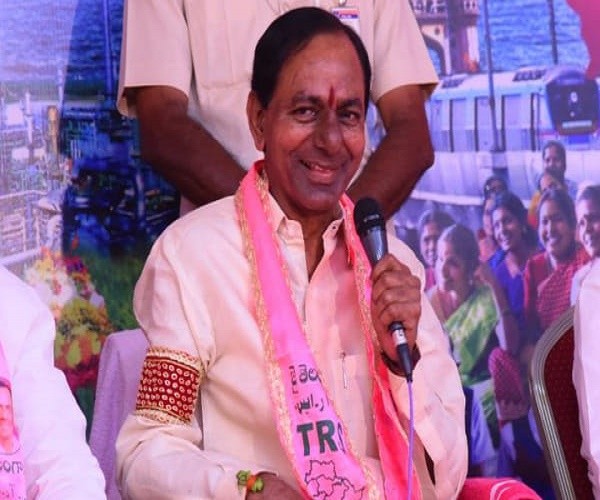 Telangana caretaker CM K. Chandrasekhara Rao has begun using his favourite and most powerful weapon to once again take an electoral advantage over rivals.

He used the harshest of words against AP CM and stepped up his anti-Andhra rhetoric in a very surprising bid to derive political benefits from evergreen Telangana sentiment. Till now, sentiment has not come to the fore as an election issue because rival parties are talking about corruption and about the four and half years’ rule of KCR. This might have irked the strategist in TRS chief.

Taking everybody by surprise, KCR used his Nizamabad meeting today to whip up Telangana sentiment totally out context and, for KCR, Telangana sentiment is just another name for anti-Andhra sentiment. This is the same simple logic that KCR effectively used to restart and sustain age-old Telangana agitation till separate statehood was conceded and he was eventually made CM.

ALSO READ:  Why KCR Is Losing Public Faith In His Second Term Of Power?

All these days, there is relatively a lull and dull phase in election campaigns of all parties in Telangana as leaders mostly spoke about TRS government’s failures or Revanth Reddy’s Note-for-Vote case or Mahakutami’s incapacities. KCR seeks to change the focus of campaigns completely, which AP TDP leaders described as just another gimmick to divert the Telangana voters’ attention from immediate burning issues there.

Playing to the masses, KCR said that Congress was trying to mortgage the interests of Telangana by tying up with Chandrababu whom TRS chief described as betrayer of Telangana. KCR also said Chandrababu had snatched away seven mandals in Khammam district doing injustice to Telangana. For sure, this would go down well with the rural masses and semi-literate sections.

Reacting angrily to this, AP leaders said that it would be a wonder if KCR tells facts ever in his political career. AP Special Status Sadhana Samithi President Chalasani Srinivasa Rao pointed out that it was the same KCR who once agreed for re-merging of eight mandals in Bhadrachalam division of Khammam district with their parent East Godavari district in AP. At that time, KCR even gave a letter to Justice Sri Krishna Committee saying that Telangana people want just only that much land that belongs to them prior to 1956 and not an inch more. As per this, the entire Bhadrachalam division has to be re-merged with East Godavari. Originally, this division’s merger with Khammam had to be carried out due to hurdles in construction of a bridge at Chintoor in those days and this temporary arrangement could be cancelled now, said Chalasani.

He further said that AP CM ordered supply of more power to Telangana even though there was no provision in reorganisation act which in a way did injustice to AP.

TDP MLC Dokka Manikya Vara Prasad took strong objection to KCR provoking sentiments saying that it was not correct on the part of TRS to create gaps between peoples of AP and Telangana for the sake of diverting public attention from its government’s failures. He said that KCR is trying to change the course of whole campaign issues by using such low tactics.

Vara Prasad said that the question of AP CM snatching seven mandals would not arise as it was passed in Parliament with support of all concerned parties at the national level. #KhabarLive