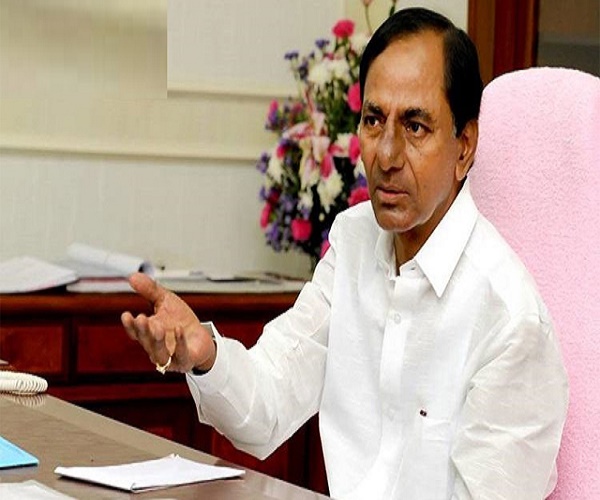 After deciding to pass on the baton to his son KT Rama Rao, Telangana State Chief Minister K Chandrasekhar Rao is preparing to move on, nursing national political ambitions with a well-defined programme of action that is sure to strike a chord with all regional satraps. Armed with the pan-India agenda, he is trying to craft a cohesive coalition with compatible parties to serve as an alternative to BJP and Congress.

Interestingly, the agenda he has on his mind seeks rewriting of the Indian Constitution itself though similar demands had come forth in the past but not with the same strength and vigour. He has already chosen Delhi as the launch-pad for his national goals and is planning to invite all anti-BJP and anti-Congress leaders to a dharna, which he wants to lead at Jantar Mantar in the nation’s capital.

Chandrasekhar Rao has given a sneak peek into his thoughts that are in a state of whirlpool on more than one occasion when he said he wanted to know what the Prime Minister has got to do with laying of roads in villages and why not the Centre leave the States alone and bother about only defence, foreign affairs, railways, communications and currency. In other words, he was echoing the concept of cooperative federalism.

KCR, an expert in statecraft, is now pushing the agenda hoping that the calculus of the emerging formation would unnerve the NDA and the Congress as it is basically the wish list of all regional parties which want strong states contrary to the stand of the national parties that want a strong Centre.

He has already broached the subject with his West Bengal counterpart Mamata Benerjee, who herself has national ambitions and took on Narendra Modi by fiercely opposing demonetisation of high value currency. The grapevine has it that KCR is also trying to hook up with his former boss N Chandrababu Naidu after the latter walked out the NDA government, though he continuous to be part of the NDA.

Rao’s focus on greater political and administrative autonomy to states appeals to all regional parties, which have been crying for a larger cut in the taxes, which the Centre collects from States.

In other words, Chandrasekhar Rao wants a fundamental change in the character of the Indian Constitution, which expressly prohibits any amendment that could alter its very basic structure.

When BJP chief Amit Shah visited Telangana in May last year and said that the centre was providing Rs.20,000 crore to the state annually, KCR delivered an iron-fisted punch on him, building a strong argument that the claims of the saffron party strongman were a tissue white lies. He asserted that it was his Telangana State, which was giving more to the Centre compared to what it was getting back in return.

In an emotional outburst, KCR had sought an apology from the BJP chief to the people of Telangana which only showed that KCR believed that the Centre was at the mercy of the State and not the other way round. Although, he did not mention it, he meant that the states needed more autonomy without the Centre breathing down on its back.

KCR, on several occasions, said he did not understand the Centre’s logic in punishing the States, which were performing well and that this trend had to be reversed, indicating that he wants radical reforms in Centre-State ties. A master strategist himself, Chandrasekhar Rao now has powerful ammunition in his hands with which he wants to attract leaders of regional parties of all hues as he expects all of them to identify themselves with the demands – the Centre should have a minimum role in governance.

In one of the series of consultations he had at his official residence with experts on Friday, Rao echoed the State’s longing for more autonomy when he said he wanted revisiting of the three lists – central, state and concurrent – and ensure that the states enjoy more freedom.

In fact, KCR was unwittingly echoing the concept of cooperative federalism which the MM Punchi Commission raised among others in its report submitted to the government in 2010. Earlier, in late 80s, Sirkaria Commission, constituted on Centre-State ties, sought removal of irritants between the states and the centre but did not call for any radical overhaul.

The spin-off benefit of KCR emerging as a national leader is that the TRS might become more cohesive by consolidating its voters in all the Assembly segments. Already a sense of euphoria is building up in the ranks of the TRS.

Even before making his national ambitions known, he had rolled out a plan to take farmers on board by offering Rs 8,000 to each of them as crop investment scheme – Rs 4,000 for khariff and Rs. 4,000 for rabi. To please them, he had told them that they could use the money as they liked, which means that it was an election-eve gift from the coffers of the state government.

Though opinion is divided over whether it is proper to gift money to farmers, no one can dispute the fact that it would greatly enhance his returns electorally. But what KCR should watch out for is that his Third Front caper should not end up dividing the anti-incumbency votes between him and the Congress and finally help the BJP at the national level.

His detractors wonder if KCR’s public posturing against the Prime Minister is part of a grand conspiracy to help Modi win the election. They point out that KCR had never had any serious differences with the BJP in the past though he did not openly associate with the saffron party, afraid it might hurt the feelings of the minorities. #KhabarLive