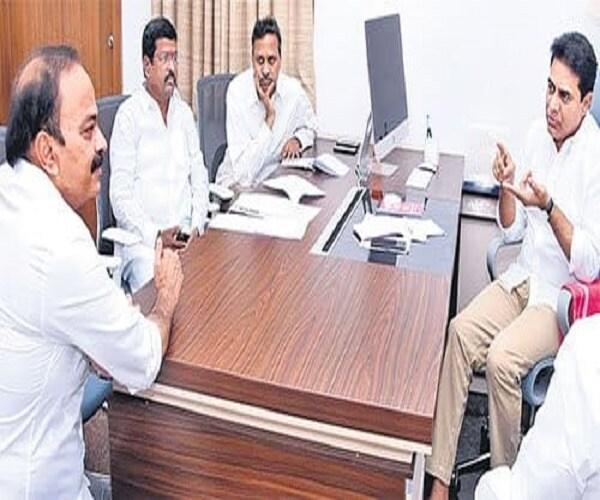 The ruling TRS glaring at severe competition from its own leaders who filed nominations as rebel candidates in municipal elections, TRS working president and Minister KT Rama Rao took upon the responsibility of counselling and convincing the rebels to work for the party’s cause. He held parleys with the Ministers and legislators in a bid to resolve issues and convince the rebels to withdraw from the fray.

To avoid unnecessary clash between the party leaders, which could reduce the winning chances of the party candidate, the TRS working president held discussions with party leaders, including Ministers, MLAs, MLCs and others, at Telangana Bhavan to take stock of the local conditions. He also exchanged ideas over the party’s election strategies, including door-to-door campaign, roadshows and social media campaigns. He spoke to some rebel candidates as well and convinced them to withdraw their nominations and work for the candidates chosen by the party.

Stern warning: “Many rebel candidates defied the local legislators and filed nominations. They have been clearly informed that those who obliged the party leadership’s request to withdraw, will be compensated with nominated posts soon. Similarly, those who refused the offer, will have no place in the party in future,” a senior legislator who participated in the one-on-one meetings told #KhabarLive.

ALSO READ:  Indian IT Profesionals In A Lurch As US H1-B Visa Policy Changed

The legislators have been instructed to focus on the poll campaign as there are less than 10 days for the polling day. They were asked to remain stationed in the constituencies and provide necessary support to the party candidates in electioneering by explaining to people the development and welfare programmes taken up by the State government in the specific municipality. “Notwithstanding the positive response from people for TRS, there should not be any laxity in poll campaign. Every household must be visited without fail, to tap full potential for voting in favour of TRS,” Rama Rao told party leaders.

Meanwhile, the party in-charges were entrusted with the responsibility of coordination between the party leadership and legislators besides supplying electioneering material as well as planning campaigns of State level leaders in respective localities. In case of a guaranteed win for TRS, the party leaders were asked to make efforts to get huge majority for the party candidate.

ALSO READ:  The Lost 'YSRCP' In Telangana Getting Ready Again To 'Hit The Polls' In Alliance With TRS?

On the other hand,#MunicipalElections2020 Are Litmus Test For TRS Party In Telangana? – As the poll bugle has been sounded in Telangana, with the State Election Commission (SEC) getting ready for elections in 120 municipalities and nine municipal corporations across the state. With all opposition parties aiming to perform their best, for K Tarakarama Rao (KTR), however, these elections are a litmus test as the working president of the TRS party, as well as the Minister for Municipal Administration and Urban Development, Industry and Commerce, Information Technology.

KT Rama Rao, along with five other MLAs, was inducted as a Telangana minister during the Cabinet expansion that took place in September 2019.

Though the main battle in these elections will be between the Congress and the TRS, the BJP is positioning itself as an alternative as well, after the boost it received in the 2019 Lok Sabha elections, where it won four seats.

KTR has already held review meetings with party cadres about the strategy to adopt in the election campaigns. All the constituency in-charges have been directed to participate in door-to-door campaigns, to spread awareness about the schemes adopted and the development that has taken place under the K Chandrasekhar Rao government.

The municipal elections will be the second local body elections after the Zilla Parishad elections, where the TRS emerged as the largest party, winning all the 32 Zilla Parishad (District Governing Body) under KCR’s leadership.

With over 79.94 lakh voters, 120 municipalities and 9 municipal corporations will go to polls on January 22.

According to sources, KTR will be holding roadshows and meetings across the districts. Besides KTR, six other ministers, including Talasani Srinivas Yadav, Danam Nagendar, Harish Rao will also be part of the campaign.

The Telangana government has formed at least seven new municipal corporations and 14 municipalities in the outskirts of greater Hyderabad. The party is considering these new segments, which earlier were under the Greater Hyderabad Municipal Corporations, as crucial in the long run.

Urban issues such as roads, drinking water and infrastructure development are likely to influence the elections. A source from the party told #KhabarLive, “We are confident that we will sweep the elections in all the corporations. The development of small towns and cities and the government’s populist schemes will definitely result in wins.”

He added that the selection of candidates for the elections is also taking place in a very “transparent and inclusive manner”.

For the TRS, which completed one year of its second tenure in the government, the municipal elections are going to be an annual examination. All the second-rung leaders of the TRS are trying to get tickets for their allies.

Meanwhile, the Congress, BJP and the TDP are also stepping up and are looking for candidates that will help them secure wins. #KhabarLive