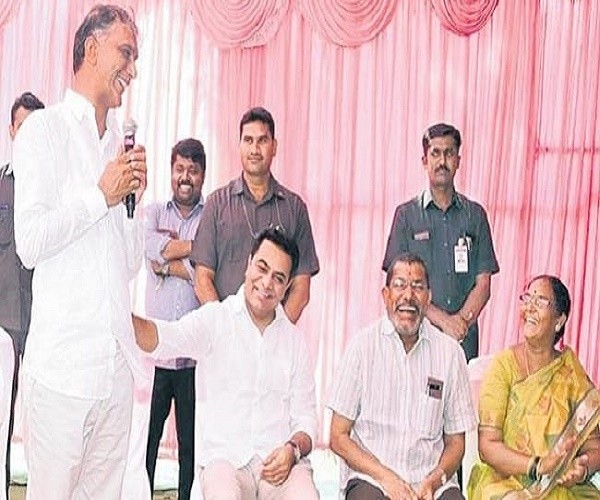 The cold war brewing in the Telangana Rashtra Samithi for quite some seems to have subsided, albeit for the time being, thanks to the intervention of party president and chief minister K Chandrasekhar Rao.

After a long time, KCR’s nephew and state irrigation minister T Harish Rao made an appearance at Pragathi Bhavan, the official residence-cum-camp office of the chief minister, on Thursday.

He attended a meeting of party workers from Siricilla constituency represented by KCR’s son and IT minister K T Rama Rao.

Both KTR and Harish Rao sought to create an impression that there were absolutely no differences between them.

And both of them competed with each other scratching each other’s back, praising the leadership of each other.

“We have grown up together as brothers in the same house since 1991. We have been competing with each other only in terms of development. We have absolutely no differences between us,” KTR said.

He praised Harish a lot in executing the Kaleshwaram lift irrigation scheme as per the directions of the chief minister.

“As long as Harish Rao is the irrigation ministry, all the projects will be going on at a high speed. All the other ministers are not able to catch up with his speed,” KTR said.

On the other hand, Harish Rao said Siricilla, which was once known for suicides by weavers, is now a developed textile township.

“In the last four years, it has developed by leaps and bounds and all the credit goes to KTR. It took three decades for Siddipet to develop into a modern town, but Siricilla could catch up with the development in just four years, thanks to KTR,” he said.

It was really a pleasant surprise to the TRS workers to see both KTR and Harish Rao together and patting each other’s back.

Till recently, both of them did not see eye to eye and it was an open secret that Harish Rao was going through a tough period in the TRS as he was completely sidelined.

Even instructions were given to KCR’s media entities – Namasthe Telangana Telugu daily, Telangana Today English daily and T-News channel to stop carrying any kind of news pertaining to Harish Rao.

Except in local tabloid editions, Harish Rao was nowhere to be seen in the TRS media till recently.

Apparently realising that Harish Rao has all the potential to damage the TRS prospects in the coming elections, KCR seems to have brought about a patch up between the two leaders and asked them not to give any impression about the differences within the family at least till the elections. #KhabarLive