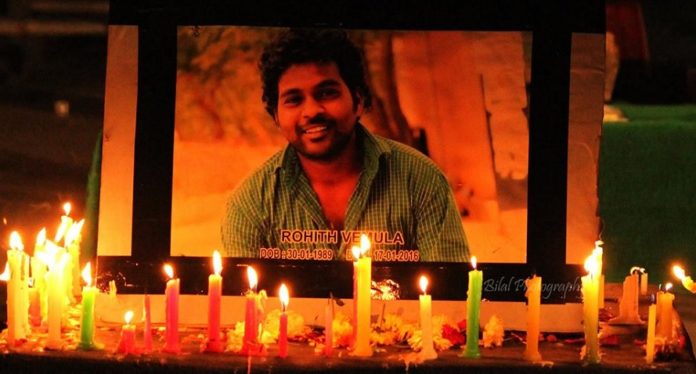 It has been two years to the death of Dalit scholar Rohith Vemula, but a mother’s fight for justice continues, also continues her battle against caste discrimination.

A lot has changed after Rohith’s suicide on the campus, but one thing that stays the same is the resolve of Radhika Vemula, Rohith’s mother. On the occasion of her son’s second death anniversary, Radhika says that over the years, Rohith’s statue on the UoH campus will have as much significance as the Bhima Koregaon stambh.

Reminiscing her two year-long journey following Rohith’s death, Radhika says that Dalits are now more united than ever. When asked whether she is the face of JusticeforRohith movement now, a question which was raised when she announced that she will lead the Dalit Mahaswabhiman Yatra, she said she is only doing her duty. The mahayatra was unfortunately postponed owing to Radhika’s health conditions and a deadline for her and Raja to appear in front of the Guntur collector to prove Rohith’s Dalit identity.

ALSO READ:  Read This - You Will Never 'Throw' Away A 'Banana Peel' Again!

After the death of the PhD scholar on Jan 17, 2016, the articulate nature of his suicide note with words like “never was a man treated as a mind” shook the conscience of the nation.

However, despite the nationwide support for the Justice for Rohith movement, the instance of attacks on Dalit scholars and activists like Sujatha Surepally and Kancha Ilaiah continues.

Speaking to KhabarLive, writer Kancha Ilaiah said, “Rohith’s death had triggered the Dalit movement and the ideological debate surrounding the discrimination of the oppressed committee.

The incident will have a long term effect as it has led to many protests, discourses and meetings on a national level. In Telanagana, the powerful emergence of Bahujan left and the mobilisation of Dalit students has been empowering.”

Meanwhile, UoH Professor K Laxminarayana, who was recently targeted on social media by ABVP national co-convener Karan Palsaniya, said, “ABVP, BJP and the vice-chancellor of UoH Apparao Podile, who are charged of collective institutional murder of Rohith, are now attacking all those who actively a participated in Justice for Rohith movement and had questioned caste discrimination on university campus at the time of Rohith’s death.” #KhabarLive

ALSO READ:  ‍‍Bad Roads Fixing In Hyderabad, Just A Call Away with  GHMC