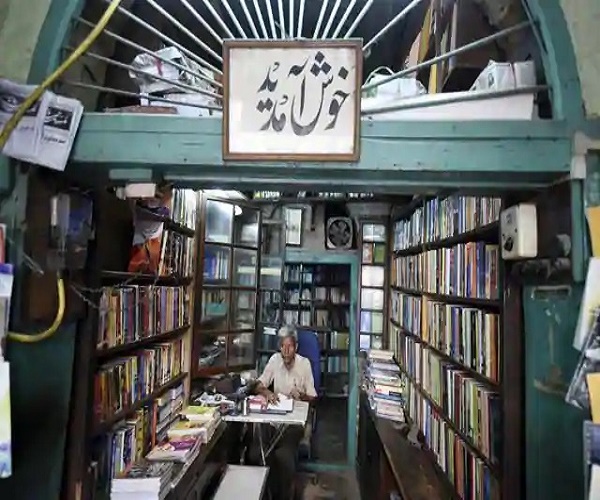 Bookshops that used to sell Urdu fiction and poetry in Old city’s Gulzar Houz area in Hyderabad have given way to garment shops and eateries, owners say business has taken a severe hit. Dressed in a spotless white kurta-pajama, Nizamuddin, 57, is a picture of despair as he dusts a few books and arranges them neatly on the iron shelves.

“Urdu Ghar has become Hotel Bazar. The market that once attracted poets, writers, and scholars now draw only foodies looking for kebab, not Kitab. This is not the kind of place my family wanted to be in,” he says in chaste Urdu, with the dramatic pauses of a melancholic poet.

Nizamuddin is the owner of Kutub Khana-e-Urdu, one of the biggest and oldest shops at the Urdu market in Gular Houz kaman area.“Urdu Ghar is fighting for survival,” he says, his voice filled with despair.

Urdu Ghar, once the heart of the old city’s fledgling Urdu poetry scene, is now struggling to stay afloat. Most bookshops that used to sell the best of Urdu fiction and poetry have given way to eateries and garment shops over the years. “Until the 1970s, this was the best place to buy Urdu books.

The shelves are stacked with a variety of books — novels, poetry, essays, and travelogues. “Contrary to perception, all kinds of books are available in Urdu; it is just that there are not many takers for them these days. There is more interest in religious books than Urdu literature; maybe it is because people are turning to religion for emotional succor in these fraught times,” says Nizamuddin.

Not far from his shop is Kutab Khana Aziza, one of the oldest bookshops bang in front of Shehraan’s main gate. Urdu magazines such as Pakiza Anchal and mystery novels of Ibn-e-Safi are stacked in front of the shop. “There are still a few old-timers who buy these mystery novels, which were once bestsellers. Until the late 1990s, I mostly sold Urdu novels, now I sell religious books. My business has gone down by 50%,” says Md Rizwan, 42, the owner.

Even shops specializing in religious books — such as Rashidia Kitab Ghar, one of the biggest and oldest in the market — are struggling to survive. “Now most of our customers are foreigners and scholars of Urdu and Arabic. Our business has come down by 40%. But as of now, we have no intention of shutting shop,” says Mohammed Farhan, sitting at his shop. Behind him are high wooden shelves that are as old as the bookshop.

Not just Rashidia most other bookshops, including Zulfiqar Book Depot, depend on tourists who come to see Charminar and Mecca Masjid and buy Urdu books as souvenirs.

“Most of my customers are tourists from Islamic countries,” says Moh Aamil of Zulfiqar Book Depot, one of the few surviving shops. “These days, even Muslim families want their children to study English, not Urdu. The generation that wrote and spoke Urdu is almost gone. I am worried about the future of the Urdu market.”

Ali Khusro, 62, who has been working at Maktaba Jamia, publishers and booksellers, says the market’s popularity suffered after Independence because Urdu was branded as the language of Muslims. “But the fact is that we have published Urdu books by about 50 Hindu writers,” Khusro says. Maktaba has the best collection of fiction, poetry, essays, and travelogues.

“Thankfully, we still have some loyal customers who come to us from places such as Malegaon, Chandigarh, Delhi, Mumbai and most of them are not Muslims,” says Khusro. The bookshop has shelves devoted to children’s books in Urdu-English.

One of Khusro’s loyal customers is Abid Hussain, 81, a resident of Yaqutpura and a regular at the market ever since a decade when he came to Hyderabad from Lahore after Partition. He says he is heartbroken. “Those days Urdu Market was the favorite haunt of poets from all over the country. There used to be poetry sessions inside the shops. The area was not congested; it only had a couple of hotels and many teashops where one could meet aspiring and established poets,” Abid Hussain says.

ALSO READ:  How Govt Financial Aid For Marginalised Students In Higher Education Is Being Choked?

“Today, I cannot recognize this place. I find it hard to negotiate my way through its cacophonic and congested streets. Most of the shops and people I knew, and more importantly the tehjeeb of the place, is gone,” says Abid Hussain.

Abid Hussain — who has been a member of the governing council of Urdu Academy and currently heads Deccani Adab, which organizes Urdu mushairas across the city — says a lot of people want to listen to Urdu poetry but no one wants to read and write in the language.

“It has become fashionable to recite and listen to Urdu couplets but no one has a real interest in Urdu. Ironically 90% of the people who recite at our mushairas write Urdu poetry in Devnagari and not Urdu script. That is a great disservice to Urdu,” he says. #KhabarLive #hydnews