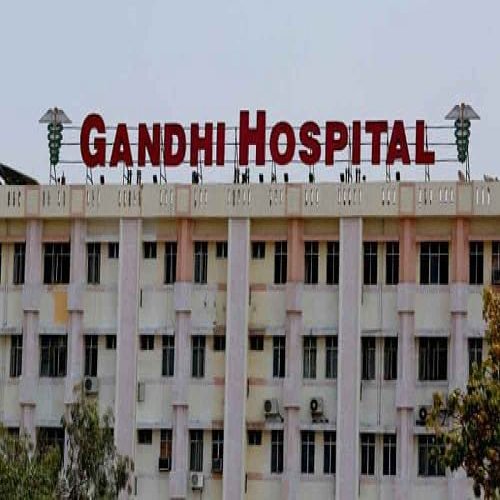 Telangana’s prestigious Covid-designated Gandhi Hospital is not giving due care to keeping of dead bodies and not even informing family members about deaths. Hundreds of bodies piled up in the unhygienic mortuary in the hospital premises, where dead bodies stinks without care and some bodies already decomposed condition.

As fear of the killer virus fills the air, dozens of grieving men and women keep arriving outside the morgue at Gandhi hospital throughout the day to identify the bodies of their loved ones who died due to COVID-19.

Some wait endlessly, others plead or argue with the authorities to release the body quickly. The morgue staff, who too are on the edge, make each person stand at a distance and take a quick peek at the body, either through the transparent patch on the body bag or by slightly unzipping it — all in a flash. None have the time or patience to go through the label on the bag which mentions the name, age, ward (where he died) and other specifics.

As chaos reigns supreme outside the Gandhi hospital mortuary, the hospital administration is struggling to set things in order at the morgue to avoid goof-ups like the one that happened recently when the morgue staff released the body of a COVID-19 victim to a wrong family — the second such incident in the recent past.

For the moment, the hospital authorities are mulling pasting a color photograph of the deceased on the body bag to help in easy identification, put up more lights around the mortuary and importantly, limit the time for releasing the body in evening, perhaps till 6.30 p.m. So far, bodies were being released at 10 or 11 pm.

Hospital sources told #KhabarLive that the ward boys involved with patient care have been reluctant to deal with the bodies at the mortuary after a few of them tested positive for the virus recently. They were the ones dealing it with regularly. Following this, the staff working under the Health Inspector have been requested to take charge of the morgue, as a temporary arrangement.

”Presently, staff from different departments and even security personnel are being made to work at the mortuary. The responsibility of the team dealing with the funeral start only after the body is placed in the ambulance,” they said.

It takes anywhere between four to five hours to shift the body to the mortuary from the ward. After making an entry about the arrival into the morgue, it is packed one by one using disinfectants and other chemicals to arrest the virus from spreading. The situation is horrendous, horrific and pathetic.

Meanwhile, the bodies keep piling up and the rush at the mortuary increases. There is no time specified for release of the body and this leads to chaos throughout the day. If the venue for cremation of two or more deceased happen to be close to each other, then the bodies are released at the same time, which is convenient for body transporters. But this could lead to more waiting time as both bodies would not be ready at the same time.

In recent goof-up incident, wherein one Rashed Ali Khan’s body was mistakenly given to another family, none noticed the label on the body bag, right from the time it was released from the mortuary till the cremation. When the family member who wrongly identified the body was questioned, he said that Rashed resembled his relative, who too had died due to COVID-19.

On the other side, the bodies of at least six persons who died of COVID-19 at Gandhi Hospital lay unattended while Greater Hyderabad Municipal Corporation of Hyderabad (GHMC) haggled with workers engaged to cremate or bury them. The workers had not been paid their salaries for their services previously, and insisted that the civic cough up now. All day long on Thursday, the grieving families waited in the lobbies of the hospital for the bodies to be moved. This is the sheer apathy of the civic authorities and political leadership who boasts the best services to Covid patients and victims.

At end of the day, senior officials of GHMC intervened and the post-mortem journey of the six persons commenced.

The drama started early after the families of the dead CVID-19 patients began making enquiries as to when the bodies would be released from the morgue.

Srinivas Reddy, whose brother, aged 46, died of COVID-19, said he went to the mortuary at 8 a.m to secure the release of the body. ”I waited the entire day for the GHMC authorities to transport the body from the mortuary. Later, I was told that the GHMC workers who deal with dead bodies had gone on a strike as they had not been paid their salaries,” Srinivas Reddy told #KhabarLive.

Srinivas Reddy was getting repeated calls from his dead brother’s wife Anusha, who was waiting for the body to be shifted. ”No one in the hospital or at the mortuary gave me a proper response. Some of them rudely told me to leave. I had been in the hospital for three days ever since my brother was admitted and my house is now a containment zone. This was the worst thing I expected after my brother’s death,” he said.

Sources close to #KhabarLive reveal four dead bodies awaited transportation for last rites in addition to two more that had been lying there. The other families too waited all day.

GHMC has hired about 15 workers including drivers to transport COVID-19 dead bodies for the last rites. They work in shifts, and have about five vehicles at their disposal throughout the day. They are paid salaries ranging from Rs 50,000 to Rs 70,000 and more, depending on the number of deaths per day. They have been given one of the rooms in the hospital and are expected to be available round-the-clock.

When contacted, GHMC assistant medical health officer (AMOH) Dr Ravinder Goud, who is the in-charge of dead body disposal, told this newspaper that there were ”some issues” pertaining to salaries and advance money sought by some of the workers. ”It was sorted out by evening,” he said without going into details.

Another senior official said that though the money for their salaries was already sanctioned, the cheques could not be released due to some ”technical issues.” The salaries were paid this evening and they have been assured there would be no delay henceforth. They have joined work,” he added. #KhabarLive #hydnews