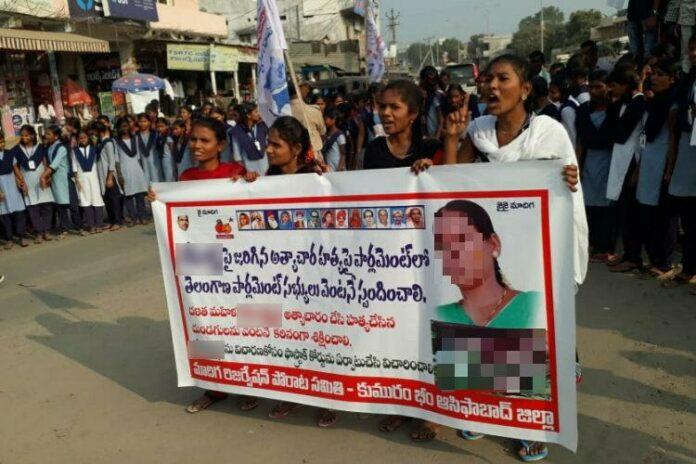 Even as the outrage over the gangrape and murder of a Hyderabad based vet continues, Dalit rights activists ask why another incident in the same state has escaped the radar.

“We fight against every injustice and condole without seeing caste and religion. But when it comes to atrocities against people from our community, there is nobody to raise their voice,” says Manda Krishna Madiga, a well-known activist who is the president of the Madiga Reservation Porata Samiti (MRPS).

The incident that he’s referring to is the brutal gangrape and murder of Aparichita (name changed), a 30-year-old woman hawker from the Budagajangam caste, which is among the most marginalised castes in Telangana, even among Dalits.

A day after the horrific incident came to light, three men – Shaik Babu (35), Shaik Shaboddin (30) and Shaik Mukdum (40) – from Ellapatur village in Lingapur were arrested and sent to judicial custody.

The crime took place on November 24 in Asifabad district, three days before the Hyderabad vet was gangraped and murdered. And though the latter incident has drawn attention to the rampant sexual violence against women in the country, Aparichita’s death is hardly being discussed.

On Wednesday, the MRPS and several other Dalit and Adivasi organisations staged a dharna, demanding justice for Aparichita.

Speaking to #KhabarLive, Aparichita’s husband says, “No official, MLA or minister has come to see us or ask after us. Why this discrimination? They seem convinced that this incident doesn’t deserve any attention.”

Aparichita was from Nirmal district. Adding that only a few local journalists approached the family and spoke to them, he alleges that their fight for justice is being ignored.

Speaking to #KhabarLive, T Madhu, District Secretary of Budgajangam Sangam, Nirmal district, says, “Since we are Dalits and we don’t have politicians, MLAs or ministers from our communities, no one is coming to meet the family or protest seeking justice for the victim. Not even the local MLA or opposition leaders have come.”

On Wednesday, the MRPS, Budagajangam and other organisations staged a dharna and rally in Asifabad, demanding justice. Hundreds of students participated in the rally, in support of the family.

According to the police, the three accused found Aparichita when she was on her way to another village, selling balloons and petty cosmetics. She was gangraped and killed in the outskirts of their village.

According to Asifabad police, investigation officials have sought the custody of the accused for further enquiry.

Speaking to #KhabarLive, DySP and Investigation Officer A Satyanarayana says, “We are waiting to get the Forensic Science Laboratory reports for the evidences we have already sent. Today, we have already requested for custody of the accused in order to submit DNA samples to the FSL to further the investigation.” #KhabarLive