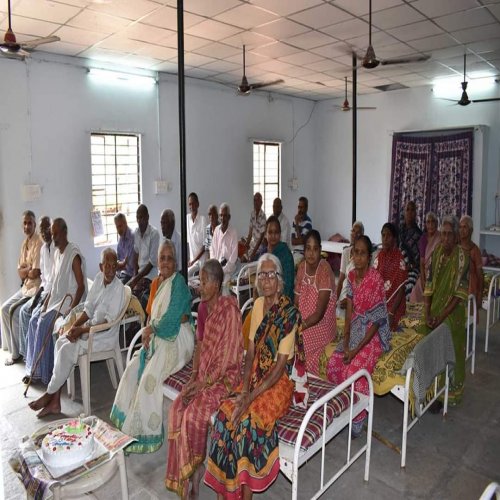 Apart from standard hygiene practices, these centres are shutting their gates to visitors and discouraging group activities to enforce social distancing. For senior citizens in these homes, already suffering from a sense of isolation, these measures are leading to anxiety and panic.

At Sai Kripa Old Age Home, situated in south-west Delhi’s Vasant Kunj area, visitors have been turned away at the gate for nearly a week now. The home has been enforcing the rules of social distancing that are expected to curb the spread of COVID-19, the novel coronavirus disease. The infection has been found to be the deadliest for senior citizens, causing 10 times the average number of deaths among those above 80.

Kripa Nath, a 75-year-old resident at Sai Kripa Home, had to make do with a video chat with his son-in-law who had come to visit him recently. “He had come from Mumbai to meet him but he is a frequent flyer so we didn’t let them meet–we asked him to wait in the lawn and organised a video call instead,” said Gyandeep Singh, the founder of the home run by a private trust.

The institution has enough groceries and vegetables to make it through this week, there are enough medicines too but an outbreak of the virus could change all that, Singh said. It is also becoming increasingly difficult for the home to hold on to the staff who are reluctant to work through the epidemic, he added.

But what is insurmountable is the impact of complete isolation on the elderly residents of old age homes, many of whom are already prone to depression and anxiety arising from multiple factors, including a sense of abandonment.

“Shaam ko sab log milkar baithte the, ek dusre ki help karte the; abhi lagta hai jaise chhua-chhoot chal raha hai (Earlier we would gather in the evening, chat and help each; now its seems like we are all practising untouchability),” said Rameshwar Prasad, 89, on how social distancing has altered the lives of the small community of 38 senior citizens living at Sai Kripa.

As the novel coronavirus flares across the world, having already caused more than 20,000 deaths, the elderly have been found to be particularly vulnerable to the disease that starts with symptoms such as fever, dry cough and difficulty in breathing. And of them, those in old age homes are most vulnerable if there is lack of care, as recent reports emerging from Spain have shown.

India has reported 649 cases of the disease as of 10.15 a.m. on March 26, 2020, according to Coronavirus Monitor, a HealthCheck database. Of the 13 deaths recorded, except a 38-year-old man in Patna, Bihar, all others were of people aged 60 years or above. This included a 76-year-old from Kalburgi in Karnataka, a 68-year-old woman in Delhi and a 72-year-old in Punjab. Of the two deaths recorded in Maharashtra, one person was 64 and the other 63 years of age.

On March 17, 2020, the Ministry of Social Justice & Empowerment issued instructions to all non-government organisations (NGOs), old age homes and other institutions for the disadvantaged to take precautionary measures for the elderly. Visitors were to be discouraged and rules of distance and hygiene maintained, including frequent handwashing and social distancing.

At Durga Old Age Home, located in south Delhi’s Sainik Farm, extra measures have been put in place, said founder Harsh Kumar. “We have a team of doctors at the centre and anyone showing any of the symptoms like sneezing or cough is being taken care of,” he said. “We have called off evening group activities and ensured greater distance between the beds of residents in shared rooms. A few had been running a fever earlier but as a precaution, we have quarantined them in single occupancy rooms.”

There is an acute shortage of infrastructure and manpower dedicated to the elderly across India, as per HelpAge reports. Section 19 of the Maintenance and Welfare of Parents’ and Senior Citizens’ Act, 2007 (MWPSCA) recommends that state governments establish at least one old age home in each district with a minimum of 150 indigent senior citizens, but few districts meet these requirements.

‘Hard to enforce isolation on the elderly’

Social and demographic factors have resulted in an increasing number of elderly shifting into old age homes, but this often affects their psychosocial well-being, as per this 2012 study published in the Delhi Psychiatry Journal. Anxiety and depression were common among the residents, it reported, due to “problems of adjustment with tight and rigid schedules, total and or near total separation from the family/social milieu, anxiety over entrusting oneself to a new environment, diminished physical capacity and very close and frequent encounters with death and ailments in the institution”.

At Vaishnav Charitable Trust, a home for the elderly in south Delhi’s Kishangarh area, Leela Das 74, put her situation down to the “greed” of the younger generation. “You [the young] threw out your parents and family to accumulate money, jewellery and property but all your power now can’t keep you safe from a virus,” she said. “So when people ask me to take care, I tell them you take care–I have seen enough of this world.”

This sense of isolation is now growing acute, said Rohan Raghavan, a general physician, who visits two old age homes every day–Nirmal Chhaya in Vasant Vihar and Panchavati in Tughlakabad, both in south Delhi. “Most of them have or had emotional breakdowns for some reason or the other,” he said. “To overcome these, they made new friends and spent time doing chores together. Now, with the self-isolation rule, that’s difficult. Now there is the sense of panic.”

At Panchavati, office staff talked about how challenging it is to convince their elderly residents to not socialise with each other. “Initially most of them argued, ‘Hamein kuchh nahin hoga (nothing will happen to us)’ or ‘Yeh ameeron ki beemari hai (this is a disease of the rich)’,” said staff member Pintoo, who goes only by his first name. It was only after Prime Minister Narendra Modi’s address to the nation on March 20, 2020, emphasising the need for senior citizens to self-quarantine, that the residents at the centre agreed to avoid gatherings, he recalled.

The severity of the infection caused by the novel coronavirus rises with age, showed studies, as we mentioned earlier. The initial cases of novel coronavirus-infected pneumonia (NCIP) occured in Wuhan in the Hubei province of China in December 2019 and January 2020, according to a study published in The New England Journal of Medicine on January 29, 2020. Based on their analysis of the first 425 confirmed cases in Wuhan to determine the epidemiologic characteristics of NCIP, they found that the “median age of the patients was 59 years (range, 15 to 89), and 240 of the 425 patients (56 percent) were male”.

Almost half the 425 cases were in adults 60 years of age or older, although case definition specified severe enough illness to require medical attention, which may have varied according to the presence of coexisting conditions, as per the study.

Amidst the spiralling crisis, Leela Das remained optimistic, citing the example of tuberculosis that claimed her daughter’s life in the early 1990s. “Tab hamare desh me TB ka bhi ilaj nahin tha, par ab hai, aur Corona ka bhi ilaj aa jaaega (There was no cure for TB then, today there is, soon we will be one for the coronavirus).” #KhabarLive #hydnews