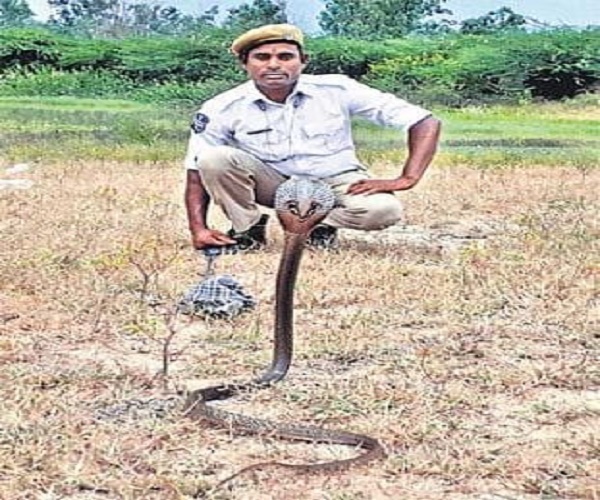 Telangana police going above and beyond their duties for the benefit of the public is something that is being increasingly seen in the recent times. One such person is Wanaparthy-based Home Guard Cheerla Krishna Sagar. Sagar is known for risking his life to rescue snakes trapped in houses and safely releasing them in the wild. In his own words, “I rescue people from snakes and also rescue snakes from people.”

Sagar’s affinity towards snakes wasn’t something he had from the beginning, as he shares, “Like most others, I used to kill snakes in my father’s farm, fearing them and assuming that every snake is venomous and all the knowledge I had about snakes was through snake charmers who used to visit our village.”

Sagar was bitten by a non-venomous rat snake six years ago, and thought he would die. “It was then that I understood the difference between venomous and non-venomous snakes, and I also realised that snakes greatly benefit farmers and the ecology,” he said.

After this incident, Sagar started watching snake-related shows on Nat Geo and other such channels and just a couple of weeks later, he started rescuing snakes. In the six years that he’s been at it, Sagar has rescued hundreds of snakes, in addition to conducting awareness sessions about snakes in schools and villages.

“Snakes are misunderstood and greatly feared. People kill them out of that fear and even in the rare instances when they get bitten by a snake, most don’t know what to do and go for traditional village medicines and worsen the situation for themselves. I try to explain to people that snakes don’t attack unless provoked and they also help farmers control pests like rats,” shares Sagar, who firmly, and rightly, believes that snakes have as much a right to live on this planet as we do.

An interesting anecdote he shares is when he conducted an awareness camp in his son’s school, “I took a few snakes to show to children but no one was coming forward. But, once my son came and held a harmless rat snake, every other child came forward and I could get rid of the fear and the prejudices they had towards these slithery creatures.”

After rescuing hundreds of snakes and getting appreciation and support from senior officials in the police department, Sagar started a YouTube channel to ensure wider awareness about snakes. According to him, his efforts have actually paid off as he now gets more calls than before, even from other States.

“I also started keeping a record of the snakes I rescued, and, in the last two months, I’ve been averaging about 100 snakes a season. Owing to my videos, I get many calls and there are days when I rescue 5-6 snakes in a single day. Also, people have been calling me from other States too when they find snakes and I guide them to handle them carefully,” explains Sagar.

“But in my videos, I also clearly say that snakes shouldn’t be handled carelessly and necessary precautions have to be taken while handling them,” he concludes. #KhabarLive