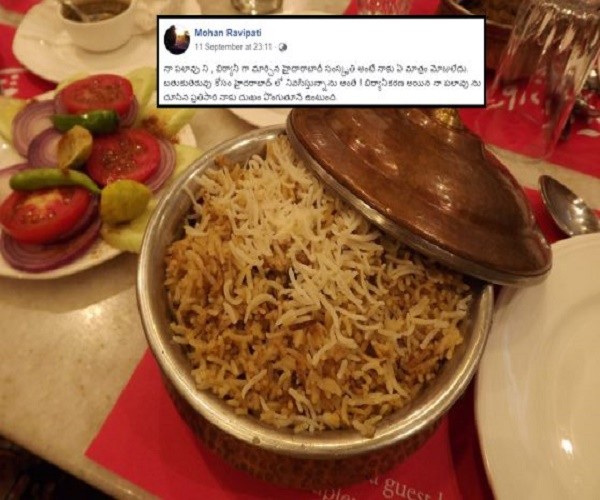 Attempts to pass off fried rice in the name of Hyderabadi biryani in hotels of other cities have always offended the true Hyderabadi – not just those born and brought up here, but also those who move to this city from different parts of the country. And now Facebook is witness to an intense discussion on ‘Pulao’ and ‘Biryani’, their origins and of course the etymology of those words too.

The fountainhead of this war of words on Facebook was triggered by a post of Mohan Ravipati: “Hyderabadi culture transformed my pulao into biryani and I have no fascination towards this culture, I am just living in Hyderabad for my livelihood.” The user also added that he feels very sad whenever he sees his ‘pulao’ which was ‘biryanised’.

Instantly, the uproar began with many taking objection to the claim of ‘briyanisation of pulao’ and most notable was the observation of another facebook user Dileep Konatham. “If you feel sad looking at biryanised pulao then how should we feel looking at Hyderabad which was Andhraised during 60 years in united Andhra Pradesh”. Then began the discussion on Biryani and Pulao and their origins. Many others felt the writer of the original post was unaware of the origins of biryani and pulao and that he was drawing a comparison between the two gastronomical delights with an ulterior motive.

“Both Andhra and Telangana have special dishes of their own. Gourmands can enjoy the dishes of both the regions. There is no need to cry over their origins, no body are working for their patents here (sic)” another Facebook user Janardhan Janumpalli wrote.

He also brought in the etymology of the dishes, “Biryani is an Urdu word derived from the Persian language, One theory is that it originates from birinj, the Persian word for rice. Another is that it derives from biryan or beriyan, to fry or roast. In South India, where rice is more widely used as a staple food, several distinct varieties of biryani emerged from Telangana (specifically Hyderabad), Tamil Nadu (Ambur), Kerala (Malabar), and Karnataka, where minority Muslim communities were present.” He added that pulao, a fried rice dish is also a Telangana dish which is usually served with Mutton korma. Though, in reality, a middle eastern dish named ‘pilaf’ was transformed as pulao, he noted.

ALSO READ:  'Kuppies' Is The New Favorite For Pizza Lovers In Hyderabad

As the war of words broke out Ravipati defended his statement saying, “Look at my post through Vijayawada lens but not Hyderabad lens, pulao is not available in Vijayawada now. Hyderabadi culture dominated and changed my pulao into biryani and it saddened me”. Meanwhile, many came out in support of Ravipati too.

Even as the debate rages over Biryani Vs Pulao issue, it’s time to try out both the delectable dishes. What do you think? #KhabarLive