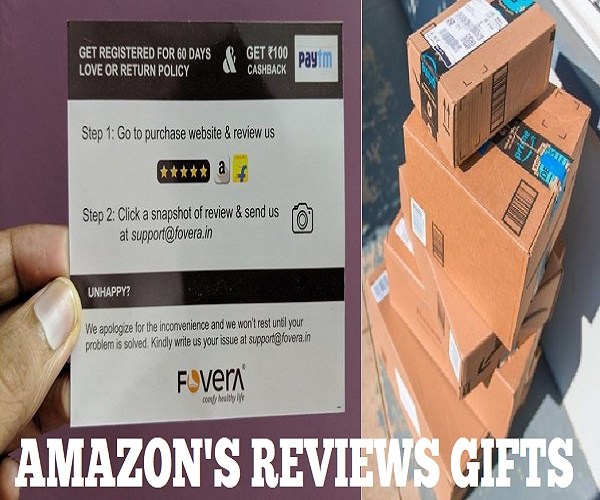 Facing cut-throat competition on Amazon and other e-commerce sites, many Indian sellers are taking to offering gifts to customers, in exchange for good reviews. With over 1.8 million sellers, nearly 600m items on display and $160 billion in third-party sales, Amazon can be an unforgiving marketplace for a business to survive.

Reviews determine the average rating the majority of customers rely on to make their purchase decisions, ratings control how high a product is placed when you look up a keyword like “iPhone cases”, which hopefully leads to sales.

If a seller doesn’t manage to score a first-page position, the chances are its listings won’t even show up on most customers’ screens. Over the years, this cut-throat culture has pushed businesses to adopt alternative ways to game the system. And for some, the answer was to simply manipulate what lies at the core of Amazon’s algorithms—reviews.

In the last few years, Amazon has been in a constant battle with fake reviews which have tainted its platform’s trustability and enabled sellers to dupe shoppers. Amazon isn’t the only victim of the fake reviews plague. From restaurant discovery apps to other e-commerce platforms, nearly every service which relies on reviews is struggling with businesses trying to game the ranking systems.

For instance, Zomato has been severely affected by the issue and has a dedicated division to ensure their feedback engine isn’t being abused. Similarly, Flipkart too has fallen prey to fraudulent feedback and in 2016, published a lengthy blog post outlining ways on how to spot fake reviews.

Like the others, Amazon is today using a series of machine-learning algorithms to prevent inauthentic reviews. The frameworks are designed to put emphasis on relatively more helpful reviews through natural language processing. The site’s systems can also tell if a listing has been inundated with an abnormally high number of comments in a short period of time.

ALSO READ:  The World Cheapest 'Pocket Microscope' @ Rs 365 Is On Sale In India!

We reached out to Amazon India for more information, but after initially acknowledging receipt of the questions, the company did not respond. However, Amazon has taken reviewers and sellers to court on the grounds of fraud as well. As per a 2016 report, the company had sued over a thousand people for writing or selling fake reviews.

In India too, Amazon sellers have begun to feel this heat as well. A few, as a result, are incentivizing reviews by bundling coupons for cashback and freebies inside delivery packages. The idea is straightforward. You receive the product you bought, send screenshots of your reviews to the brand via email, and claim your reward.

Fovera, an Ahmedabad-based biomechanics startup, offers a Rs 100 Paytm cashback when you purchase and drop a review for their lumbar support memory foam cushion on either Amazon or Flipkart. Similarly, Seute, an accessory manufacturer from Pune, treats buyers who review its Verdiater Laptop Backpack both on Amazon and Google with a complimentary travel pouch.

What’s interesting here is that, on the surface, it might not seem these vendors are committing any unethical activities and are genuinely looking for feedback to improve. After all, their coupons and emails don’t explicitly ask the person to publish a 5-star review.

Sunny Patel, Fovera’s Founder, even argues that they just “want to hear inputs from the customer and never mention or request for 5-star reviews.” But Patel refused to address the Rs 100 cashback, while Seute declined to participate in the story.

Customers interpret it as if the seller is expecting positive feedback in exchange for the coupon. Fovera’s voucher also features a 5-star figure that could be misleading. “I had published a 5-star review despite a few minor flaws because I assumed why else would they send me the pouch?”, said Ashish Mehta, a 21-year-old IT engineer from Bangalore who was looking for a new backpack for his laptop.

In most scenarios, the chances are these gifts will end up influencing the review towards the seller’s side since the majority of shoppers will be doing it solely for the reward. What’s more, incentivized reviews are against Amazon’s policies irrespective of whether a disclaimer is added. That’s why Amazon banned them back in 2016, and now only allows gifts which come from its own Vine program.

Buyers are not aware of this either and there is a possibility that Amazon could suspend their accounts in the future, especially considering that a great number of Fovera, as well as Seute’s reviews, are from users who have posted a review for the first time.

“This seems to be happening on Amazon in many regions – not just Amazon.in, but Amazon.co.uk, Amazon.com and I’m sure many others. Not only is it 100% against Amazon’s rules to offer freebies, discounts or payments in exchange for a review, it’s against the law (here in the USA) if the reviewer does not disclose that they received compensation for the review,” commented Tommy Noonan, founder of ReviewMeta.

Fakespot, an online platform which analyzes Amazon reviews, graded Seute’s backpack an ‘F’ and its engine found an abnormally large amount of “deception” involved. Both products also failed ReviewMeta’s tests, another service which examines the reliability of Amazon reviews.

These evaluations are by no means perfect. Their frameworks essentially try to identify patterns in the reviews and with natural language processing, draw conclusions whether they’re fraudulent.

The concern of counterfeit reviews, however, runs much deeper than these two instances. A couple of months ago, the Federal Trade Commission of the United States took legal action against a company which paid a third-party website called amazonverifiedreviews.com for fake reviews. Late last year, Amazon employees were found taking bribes for internal sales metrics and reviewers’ email addresses. Reddit is swarming with posts from customers who were pestered by sellers for updating a negative review.

There’s also the infamous case of Review Hijacking. “In 2018, we started noticing a problem on Amazon that we called ‘Review Hijacking’” said Tommy Nonnan. “Sellers can basically hijack old listings and steal all the reviews for that product. This results in an inflated review count and average product score, but when you read the reviews, you’ll notice they are for the wrong product.”

“So you might be looking at an iPhone Charger and see a review that says ‘This coloring book was great for my 5-year old daughter!’. Amazon seems to be deleting some of the listings who engage in this practice, but it still appears to happen regularly,” explained Noonan.

Social networks like Facebook are swarming with communities where merchants can hire Amazon users for fake reviews. Not to mention the Black Hat market is still flourishing and sellers are reportedly shelling out as much as $10,000 a month to boost their products to the top.

Despite Amazon’s aggressive efforts, both Fakespot and ReviewMeta estimate that 30% of the products they’ve analyzed failed to pass. “It [The problem] has actually become worse. I would say it is at epidemic proportions as there is so much money to be made via e-commerce,” stated Saoud Khalifah, CEO, and Founder at Fakespot.

“My data shows that Amazon is deleting millions of reviews – so they are definitely doing something, but it’s impossible to know exactly what. However, I feel like I’m constantly coming across some blatant review manipulation schemes (such as this one), so it seems it’s a constant game of cat-and-mouse. The sellers figure out a new scheme and it takes Amazon a bit to identify it and shut it down,” added Noonan. #KhabarLive