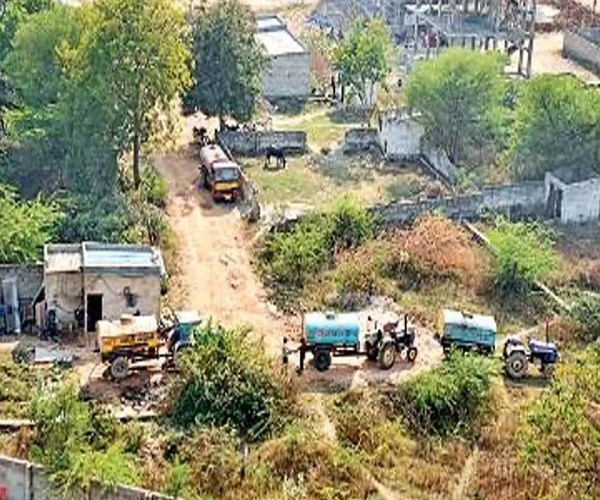 Throughout the day, at least half a dozen tankers are parked about 200 meters away from the lake and the drivers can be seen filling the tankers with water through large pipes.
“A fleet of vehicles can be seen entering the bund area of the lake to illegally fill groundwater in the tankers.

The lake has FTL (Full Tank Level) marked and the bund also has fencing, but it needs to be redone. The water takers enter the area through main gate which was constructed as part of fencing for the lake, however there is no security guard in place to stop these water tankers from entering the bund area,” said Madhulika Chowdary from Dhruvansh NGO.

Municipal authorities must immediately stop illegal drawing of water from the historic Ibrahim Cheruvu. A probe must be initiated to check whether the water is being used to pass off as drinking water in neighbourhood areas as well.

Residents claim that despite several complaints officials are not taking action against tanker operators. “It is commercial exploitation of groundwater. The tankers with names of different water supplying agencies written on them make a beeline to illegally draw precious groundwater,” said Rakesh Kumar, a resident of Neknampur.

As per the Water Air Land and Trees (WALTA) Act, commercialisation of borewell water is not allowed in residential areas or city limits.

GHMC zonal commissioner Musharaf Farooqui said, “There are two problems, one is water collection and second is dumping of waste which includes building debris and demolition waste. In order to protect these lakes and get rid of the problems, we will deploy security guards at the spot. We have already deployed guards at 12 lakes and we will extend the security to other lakes, including Ibrahim Cheruvu and Neknampur Lake within 15 days.” #KhabarLive