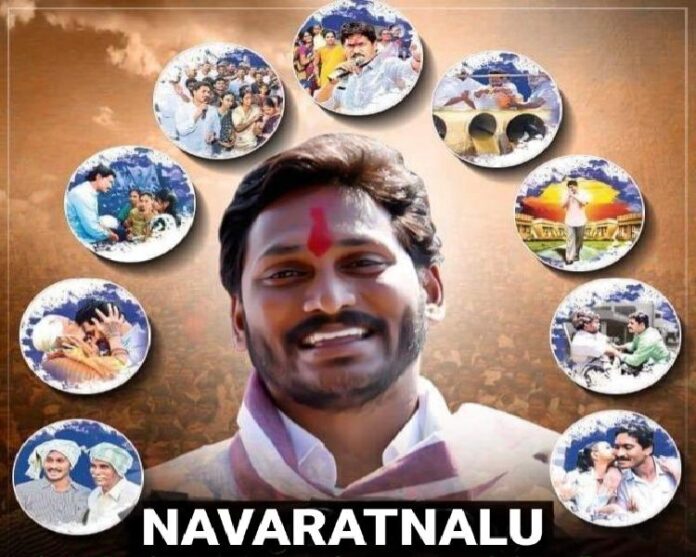 This million dollar question that is uppermost in the minds of people concerned about Andhra Pradesh. An elected government naturally tries to bind to the promises made by the ruling party in its election manifesto.

In Andhra Pradesh, one could get an overall picture of the state’s financial position just by looking into the promises made in the YSRCP’s manifesto. For, it is not possible for any government to implement such welfare agenda using only funds that are readily available.  It has to go for mobilisation of funds on a large scale to meet its requirements, often at exorbitant interest rates, from the Union government and external funding agencies.

Besides, the government is desperately thinking of selling its lands in prime localities of various cities and town. Funds totaling thousands of crores of rupees may be available with this kind of indiscriminate selling of lands.  People generally think that the government is the custodian of public properties like lands and that it would protect them from encroachment by persons enjoying proximity with the rulers.

If the present government sincerely protects government lands in various places, then future generations also would be able to use public property.

A popular chief minister of yesteryear, at a review of the Endowments Department, stated that thousands of acres of land worth Rs.4 lakh crore was available with the government. The officials and media persons present were taken aback. The same leader made a vain bid to go further in that line of action later. Thanks to public awareness in this regard, the government could not move freely in that direction.

Monthly borrowings have become common now to meet the minimum requirements of the state, including payment of salaries to government employees. Earlier, the government had to enhance the retirement age from 58 years to 60 years mainly due to lack of funds to pay their retirement benefits.
Freebies are slowly becoming hurdles on the road to development.

Many departments in the government are forced to divert funds meant for developmental works. For example, the funds allocated to SC&ST Sub Plan get diverted to populist schemes.
The government often defends its act of diverting funds, saying the funds are being used for the welfare of the same people.

Some observers say that freebies are going to cause ‘fiscal paralysis’ of the state of Andhra Pradesh in the backdrop of the government’s borrowings for the implementation of welfare schemes.

There is dire need for balancing welfare measures and developmental schemes. For instance, in view of the rainy season, roads across the state are in a bad shape with deadly potholes that may claim the lives of road users. Yet, the government is not in a position to repair even very badly affected roads due to financial crunch.

As per official data, the Andhra Pradesh government has deposited Rs.1.05 lakh crores, out of the Rs.1.27 lakhs crore it borrowed, into the accounts of beneficiaries of various welfare schemes in the state. Even a single rupee would not come back to the government from this huge amount.

This amount of Rs.1.05 lakh crores is almost double the amount that is required for the Polavaram multi-purpose project, which is considered to be the lifeline of Andhra Pradesh in the backdrop of the state’s bifurcation.

Imagine how pleasant it would be if the Polavaram project is realised! The irrigation situation would be very comfortable in AP with ‘assured water’ to every major and medium irrigation projects across the state.

The present government headed by YS Jaganmohan Reddy got 86% of seats (151 seats out of 175) of the total strength of AP Assembly. Every member of the ruling party, including its president, may agree that their party would not get the same number of seats (151) in the next elections even if it retains power.

He can still do wonders with his majority and make the rest of his political journey hassle-free. He has no opposition both within the party and the government. Jagan would do well to take up the Polavaram Project in right earnest. Only by taking daring steps the state government can create assets.
Creation of assets will be the real gift and service to future generations.

Despite being hampered by financial crunch in the initial years of the Andhra State that was carved out of composite Madras State in 1953,  the then Chief Minister of Andhra State T.Prakasam laid the foundation stone for the Krishna Barrage (later named after him) at Vijayawada in 1954. In fact, initially he got a negative reply from then Prime Minister Pandit Nehru when he sought financial help from the Centre for the project. Still Prakasam had his way finally. Jagan is in far better position now.

People are no doubt getting thousands of rupees for the purpose of creating livelihood options for themselves.

They set up a small business establishment like grocery shop or something else with the sum of Rs.30, 000/- given freely by the government. They simply wind up those establishments once that amount gets exhausted within days.

Since there is no recovery or question of repayment of that money to the government by the beneficiaries, they are free to do anything. That means the government is indirectly making its own people shed responsibility and commitment.