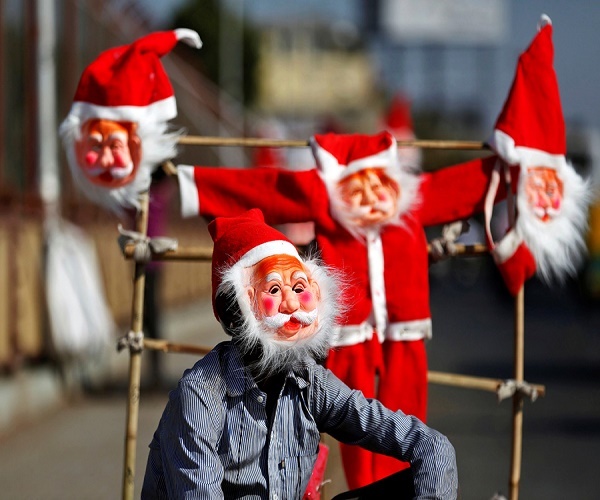 It is the season to be jolly. Except if you are a Santa Claus in Hyderabad or rather if you have to play a Santa Claus. Then it’s time to put on a scratchy red suit, stick on a prickly white beard or an ugly Santa mask, don a ridiculous red dunce cap and walk around the malls going Ho-Ho-Ho and offering coupons for holiday special drinks.

Sometimes there is a pillow under the suit. Sometimes even that pretence is dropped, and skinny Santas and slightly potbellied Santas and drooping Santas roam around miserably looking to spread cheer.

Hyderabad has always been famous for its Christmas. The young men who are hired to stand around and try and entice us to get credit cards, Jio SIMs or just part with our phone numbers for a spa coupon are pressed into service as rented Santa Clauses and add a layer of false jollity to their sales pitch.

On warm winter afternoons, and Hyderabad has plenty of them, it’s rather tragic to see thin men in fat suits and Christmas sandwich boards standing sweatily in the sun at the entrance to the mall, and telling us about year-end sales on televisions and home entertainment systems.

The old Christmas spirit was as fake as the cotton wool snow we sprinkled on our trees. But it was homespun kind of fake. We knew that if we peeled the beards and the red robes off those little Santa dolls we bought, small, ordinary, very desi, very cheap plastic dolls would emerge. But we willingly participated in the suspension of disbelief and that was the miracle of Christmas.

The mall-fakery is joyless because it’s slick. The canned carols, the made-up Santa, the big tree and the glossily wrapped empty gift boxes all tell a story of empty symbolism, which is everything Christmas was not in Hyderbad. But most of all, it’s joyless because it’s generic. There is ultimately nothing Hyderabad about it. It’s pre-packaged Christmas, which feels the same in malls all over.

But a Hyderabad Christmas can be uniquely Hyderabadi. It’s a far cry from the heated politically correct debates of America where the office party had to be called a holiday party as opposed to a Christmas party so as not to offend anyone. Ours was a “secular” Christmas where if there can be any such thing as middle class did up their spindly Christmas trees, queued up for plum cake at John’s bakery, went to see the lights on Secunderabad station Street and had tea and Dundee cake at Flurys patisserie that stayed open all night on Christmas eve.

The Hyderbad love for plum cake baffles Westerners who think of the Christmas fruit cake as a sort of gag gift, the indestructible cake carrying in it the ghosts of Christmases past. But Hyderabad’s undimmed passion for Christmas cake is almost endearing because it’s genuinely plummy, and not an affectation.

Every street corner bakery has a “Christmas cake” counter piled high with loaves of plum cake. Dingy little bakeries in the narrow lanes of Taltala come alive at this time as they rent their ovens out by the hour to those who want their own cakes baked. They are charged by the kilo of sugar.

Farmers in little towns, a RTC bus ride away from Hyderabad, raise turkeys and bring them to sell to Hyderabad and always draw a curious crowd. What are they? asks someone. “Australian chickens,” replies a knowledgeable bystander. The city’s snooty clubs are full of Christmas parties where Telugu Christians can finally parade around in their fanciest sweaters and scarves and enjoy mince pies. The city’s streets are filled with the less fortunate, wearing Santa hats too and just as determined to make merry.

Christmas has always been Hyderabad’s winter of content, brief but glorious. So that’s why it feels more tragic to see it put through the mall discount conveyer belt, which conveys everything but goodwill.

What have we done to Santa? And what have we done to Christmas? There’s a Christmas festival but with such jostling crowds it’s easy to feel you will get trampled to death, an ignominious death in a Santa hat. Uff so crowded, say old timers, it’s like national festival crowd with everyone from the suburbs coming to Hyderabad to see the lights and service.

Actually instead of lamenting about the ghosts of Christmases past, the Hyderabad Christmas can reinvent itself. It could be the big event of festivity for NRIs. This is the season when the migratory Telugus returns home. They go to Secunderabad Club and Jesus Club and have whisky sours and devilled crab at Mocambo and check out the duck festival while looking at the Christmas lights, bigger, better, brighter thanks to the electric largesse of KCR.

There could be Xmas package tours complete with the mandatory Hyderabad experiences – a VIP pass to get you to the head of the line at Karachi Or Cake World’s for that plum cake, a selfie with the Santa at the Christmas festival in Abids, a night time visit to the street party of the Anglo Indians at Secunderabad and the midnight mass at St.Mary’s.

And presiding over it all will be the patron saint of Christmas, Hyderabad’s own Smita Kumari caroling away at the manger on James Street and Himayatnagar. Who needs the malls anymore? Christmas is still alive and well in Hyderabad, a little more these days than Telangana, but as long as the plum cake is still plummy who cares. #KhabarLive