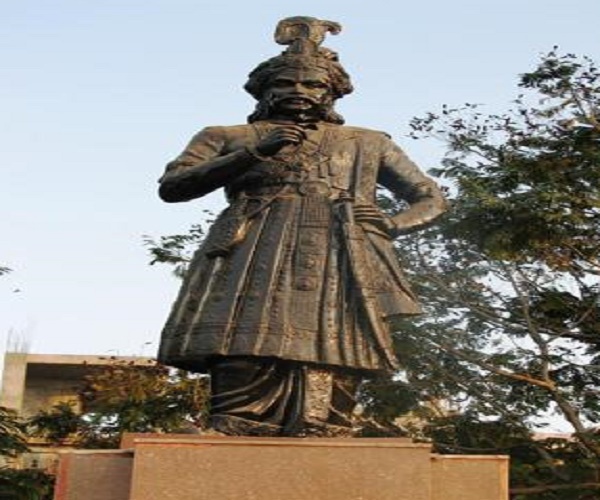 When Vijayanagar was defeated at the Battle of Talikota in January 1565, what fell with it was the last formidable empire to tower over the Indian peninsula. To be clear, the old kingdom continued to exist for many more decades in a truncated form, but Talikota marked the end of all glories for a power that once boasted of such monarchs as Krishnadeva Raya. Weakened and emasculated, its rulers watched as their authority dissolved, and regional dynasts emerged, inaugurating the so-called Nayaka period in the south.

In the northern Deccan, meanwhile, Vijayanagar’s traditional enemies—the sultans who emerged victorious at Talikota—ruled for a century more, till the Mughals swallowed their independence during the reigns of Shah Jahan and his son. With the fall of Golconda in 1687, even their tale was concluded—the next chapter pivoted around the feud between Shivaji the Maratha and Aurangzeb, the last Great Mughal.

What, however, would have been the course of history, had Vijayanagar survived? What if, instead of having his severed head impaled on a spear, Rama Raya, the de-facto emperor, had triumphed at Talikota? He did reign, after all, over one of the wealthiest empires of his day, lacking neither in men nor money; it was better artillery and fortifications that generally helped his rivals to the north.

Had he defeated them, would he have annexed their lands or merely demanded tribute? The Qutb Shah of Golconda, in fact, was once a friend, whose years of exile as a youth were spent in Rama Raya’s court. The Adil Shah of Bijapur, another of Talikota’s triumphant sultans, was Rama Raya’s adopted son.

ALSO READ:  The Resilient And Enduring 'Banjara Tribe' In Telangana

It is likely that Vijayanagar would have allowed these Islamic states to continue as vassals, just as the sultans did not comprehensively attach Vijayanagar’s lands after victory in 1565. But their independence would have been limited, great riches transferred from their vanquished capitals to be heaped before the victorious Raya.

But what would this have meant for the Mughals? The picture is a fascinating one: to visualize Akbar presiding over an ambitious, growing empire from Agra, while the south remained the sphere of influence of Vijayanagar’s Rayas. The Deccan’s Sultans might have formed buffer states between these two great empires—one moment seeking friendship in Vijayanagar, the next trying to persuade the Mughals to help unshackle themselves from the southern yoke.

They were also close to the Shah in Persia: would he have played politics through his Deccani allies to balance Vijayanagar and the Mughals? Or would he have allied firmly with the Hindu dynasty that dominated the peninsula—one which was more actively part of international networks of trade—than the Mughals who were his rivals in the wider world of Islam? And where would the Portuguese fit into this?

After all, trade in the Arabian Sea was falling into their European hands, and overtures had been made from Vijayanagar for special understanding and friendship. Would the Portuguese have had to choose between the Mughal and the Raya?

To think of India divided between two dominant powers allows for a grand (even if entirely imaginary) picture: the Mughals with their influence stretched across the Gangetic belt, and from Afghanistan to Bengal, while all that lay south of the Narmada became the dominion of the heirs of Krishnadeva Raya.

At some point the two would certainly have clashed—Mughal ambitions and the ballooning of their empire could only lead them towards the frontier of the southern emperor, just as the latter’s ancestral conflict with Orissa’s monarchs would have mobilized Vijayanagar’s armies towards the north. So, instead of the sensational confrontation that the 17th century saw between the Marathas and the Mughals, would Aurangzeb have found himself battling the might of an imperial equal? Whose arms would have triumphed?

The Mughals, after all, drew talent from across the Islamic world—warriors, administrators, artillerymen, and others—while Vijayanagar, even in its rivalry with regional sultans, was often unable to source the latest technology, or even the best horses. Would, perhaps, the Portuguese have filled the gap and become Vijayanagar’s agents and arms dealers?

Then there is the matter of culture. Persian sartorial tastes and much else from the Islamicate world touched life in Vijayanagar—its temple sculptures, architecture, and even the famous bronze of Krishnadeva Raya and his wives in the Tirupati temple, stand testament to this.

A Vijayanagar princess was given once in marriage to a sultan, while another emperor is believed to have toyed with the idea of seeking a bride from Catholic Portugal. Could an alliance with Akbar have ended with a matrimonial bond between the two empires, perhaps after a military confrontation? Or would Akbar have had to concede victory to the Raya, ceding territory and becoming the lesser of India’s two great emperors?

It would most likely have been difficult for either to completely overpower the other—but the constant balancing of power between north and south might have birthed interesting dynamics, even as these two major courts patronized a fascinating universe of ideas and culture, poets and scholars, artists and artisans.

If Vijayanagar had survived, India might have entered the modern age looking a great deal different. Its experience with the European trading companies that sought to colonize this land could have taken a different shape—a powerful emperor in the peninsula might have been able to contain Portuguese, Dutch, and English influence.

Many later heroes—from Shivaji down to Tipu—might not have emerged at all, had Vijayanagar’s imperial order held. But fantasy is perhaps best tempered with the evidence left by reality: great empires often fell not because of external enemies but due to internal contradictions; because of the misguided policies of proud rulers than the arms of a terrible invader.

So, for all we know, if Vijayanagar had survived after Talikota, it may yet have collapsed a few generations later, limited minds and incapable men bringing about what the Deccan’s sultans achieved in 1565 by force of arms. #KhabarLive