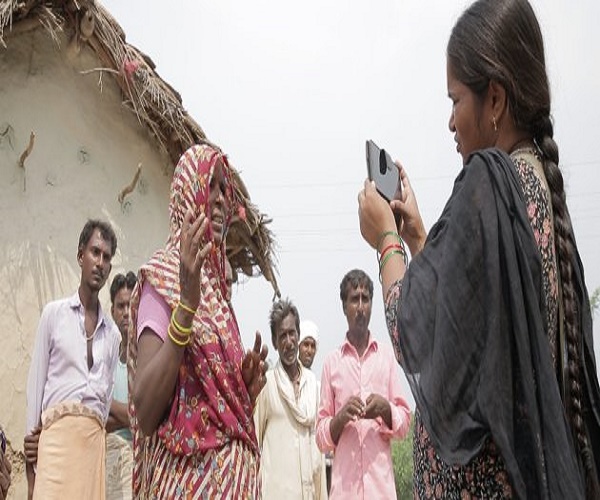 Grassroots journalist Meera Devi, at work. On an afternoon in November, she allows the roots of a story to reveal itself, some kilometres away from Karwi, part of Bundelkhand in Uttar Pradesh. Hailing an auto to a juncture outside the heart of a village in Chitrakoot district, she reaches a spot that looks downright dangerous – mangled and damaged wires criss-cross in an ugly maze, while worn away, stringy cable wires seem ready to crackle and snap. Indeed, these are the reasons why both electrical shortage and deaths-by-short-circuit are common in this region – reports she has filed several times, in her early days of journalism.

Meera, currently the Chief Reporter of our organisation KhabarLive, walks on, stopping only to adjust her smartphone on a hand-held tripod as she takes pictures and video recordings, capturing the span of the never-ending lethal wires. Accompanying her on this jaunt are three stringers in training – they are observing and learning about the processes of reporting. Conducting a training workshop, Meera is encouraging her juniors to follow her lead.

She employs the classic writing mantra, in a way – show, don’t tell – as she walks on, pausing occasionally to explain light, shadow, frame, and other tools significant for a video journalist. As she asks questions on record, she never forgets to listen intently as people from the villages speak, telling her about the pressing issues they are facing. “Almost nobody comes here to do a story. How did you come?”, an old man asks her. Meera smiles – this isn’t the first time she has heard this, nor is it the only context in which Meera finds herself at the receiving end of this particular line of interrogation. Usually, it’s along the lines of “Arre, aap toh ladies hai, yahaan kaise pahunch gaye?” And is often more offensive, much, much uglier. It is not a rare occasion for Meera to be subjected to threats if she gets too close to sarkari apathy or breakdowns – she has been told often to stay away.

ALSO READ:  The History Of Royal Hyderabadi Cuisines Of India

Working in as-regressive-as-it-gets Bundelkhand for over 12 years, Meera is quite the anomaly, and she knows it. The first day of the training workshop saw Meera reminding all the incoming women that she comes from a similar position of marginalization. “I am low caste too”, she reminds the attendees, all of whom have signed up for a new life, nursing ambitions, dreams, desires. And just the aching will to make something of their lives.

As they listen to Meera share with them basic guidelines – “Use only your own voice, it matters”; “Tell the stories you want to tell” – they almost cannot believe their ears, even as their hearts palpitate with joy and trepidation, both. Because this is not a place where you can be comfortable in your identity as Dalit and woman. According to the NCRB report released in December 2017, U.P. held the dubious distinction of being among the leading states for both caste and gender-based violence. This, after all, is the context for each and every woman reporter working out of Uttar Pradesh.

ALSO READ:  Govt Diagnosis Of 'Fake News' is Worse Than the Disease, Forget About The 'Remedy'?

Everywhere you go, important spaces are occupied by men and men alone – and a very specific kind of man, those with upper-caste surnames. As you walk through villages, you encounter only men. “We need to speak to more women”, is a mantra Meera often chants, to herself. “Today we are living in the twenty first century and everyone is connected through the internet,” says Meera, in an all-new episode of her flagship show, Chief Reporter ki Diary Se, “The world has advanced so much that robots are taking over human jobs. And yet I find it extremely shameful to confess that caste discrimination still exists in Banda. She goes onto recount the difficulties she personally experienced in a recent search for a roof over her head, when she came face to face with hesitation on the part of landlords to sign final leases. The reason was crystal-clear – Meera has been reporting on it constantly.

ALSO READ:  Finest Places In Hyderabad To Dine And Drink With Ease And Comfort

In July 2017, she visited the residents of Banda’s Malin village where there is a pre-dominance of the Valmiki caste. The village inhabitants told Meera, in no uncertain terms, that if people from higher castes see them in the market, they keep their distance. They explained, in vivid detail, how shop keepers throw purchased goods at them, so as to avoid making physical contact. “The shop keepers don’t want to take cash from our hands. Instead we have to keep it on the counter”, they told her.

The village itself, “full of filth and dirt,” does not have sweepers from the local municipal corporation like other villages because of the caste implications associated with lower castes cleaning up for other people. “I was told that the authorities asked the communities to clean their own dirt because the lower caste people are supposed to clean the dirt of other people,” said Meera. By revealing to the viewers these stories behind our own filed story, Meera’s a living-breathing empowerment story. People know that their stories matter, that caste and gender are not shackles to hold you back. They should set you free.#KhabarLive