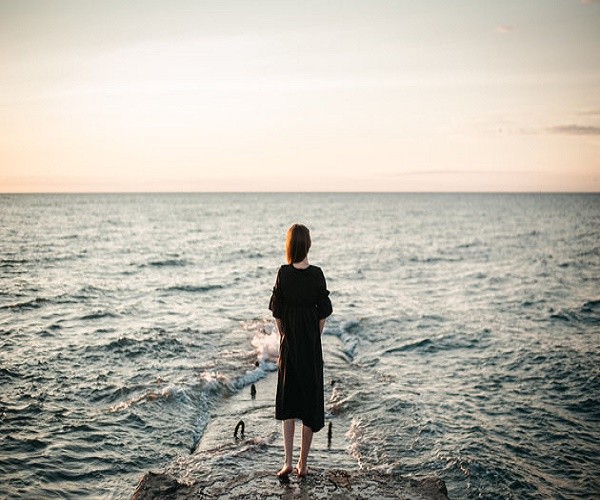 The day after I learned of Luna’s death, my emotions slid and then split sharply into opposing camps. I was struck with both the urge to talk about Luna* with my colleagues ― obsessively, indiscriminately ― and the pressure to mute my sadness for the sake of preserving (what I had hoped) was a reputation for resiliency.

The memory of my last visit with her ― when she had smiled with teeth and held out her left palm for me to high-five ― played like a slideshow on infinite loop. I had finally gotten the meds right, and she had finally committed to taking them every day; all signs pointed toward remission.

Luna had told me, at our last visit before her death, that she knew she would probably struggle with mental illness for the rest of her life and that the fact no longer bothered her. She had then pulled a letter out of her purse, addressed to Future Luna In Distress and signed Luna, Today. She read it out loud for both of us to witness.

In those first weeks after she killed herself, my feelings belied my education. In school, over and over throughout the years, I had been taught that a suicide attempt without warning signs was possible and that many mental health professionals had engaged with a seemingly recovered patient only to hear news of their death a few days later.

I had known, when I entered psychiatry first as a nurse and later as a nurse practitioner, that I would treat suicidal and homicidal people. It is nearly a statistical certainty that psychiatric providers will lose some of their very sick patients to suicide. Par for the course, like a cardiologist treating heart blockage.

Logic is rarely a conciliator of strong, sudden emotion, and the attempts I made to reason my way past the grief were met with failure and worsening anxiety. Mornings brought stomachaches and panic attacks, with bedtime marked by nightmares and insomnia. I ruminated about patients I had sent to the hospital for emergency admission to the psychiatric ward, and about patients I hadn’t heard from in a while. Were they doing OK, or were they all dead, too?

My grief response seemed proof to me that I was oversensitive; worse, still, that I was inadequate for the job. The urge to share my grief with my colleagues had been superseded by the concern that they would begin to see me as a type: the sort of co-worker who had trouble weathering the employment landscape, the one who was constantly unraveling after taking on more than she could handle.

There was something else, too, a nebulous feeling that had crept into my overall dysphoria and was hard to identify. Coming across some old drawings I had made in my 20s, a decade characterized by my own suicidal depression, helped to give name to the burdensome sensation: duplicity.

As a psychiatric provider, I am legally and ethically tasked with preventing suicide in others. However, as a long-time sufferer of chronic mental illness myself, I know that when I am depressed, the fantasies of ending my life are too urgent and encompassing to allow for the planning of a doctor’s visit.

Had Luna told me that she had plans for suicide, I would have called 911 and signed a piece of paper that gave the receiving hospital instructions to hold Luna against her will if she tried to leave. She was a danger to herself, and this temporarily suspended her rights. After her death, I began to feel deceitful committing others with suicidal intentions to psychiatric hospitals when I experienced the same impulses yet walked free.

At age 17, three days before my classmates and I would cross the stage to receive our high school diplomas, I overdosed on sleeping pills in my childhood bedroom. Hallucinations of a devil carrying me to hell interrupted the attempt, residual whispers in my subconscious that convinced me I would be eternally punished for my deed. After the fact, lying awake on my hard mattress in the darkness of the psych ward, I would feel annoyed at myself ― I was an atheist. I didn’t even believe in hell.

The email strongly encouraged you to forward its message (which I have since forgotten) to 10 others, and it threatened that if you did not do so, a small boy in India would be damned to drag an elephant carcass behind him for one year. I received this email when I was about 10, and its impression of dread has continued to circulate in my mind 22 years later.

The boy is bereft in the desert and pulling the incredible weight of bones behind him. He has not been explained a reason why this fate has befallen him, nor given guidance on how to overcome it. When hope is still fresh, the boy engages with his rage and discomfort, using them to propel him across the desert in search of a better outcome. Eventually, though, tired and disheartened by the unchanged conditions, the boy acquiesces to his misfortune. He believes then that his exile from life is permanent, and his aliveness strikes him as wrathful; why, in this landscape of death, do his lungs continue to inspire?

I relate to the boy. When I am suicidal, my depression is the elephant, that silent pile of bones I have been dragging behind me for what feels like a lifetime. I know from the violence of Luna’s bipolar disorder that her illness was also her elephant, and therefore I cannot blame her for the actions she took to remove herself from her suffering.

There are days I still worry I am a fraud, outwardly modeling healthful behaviors while internally, the seesaw of going on and giving up is heavily skewed toward the latter.

Although I am not sicker than most, I am sicker than many, and there are days when I feel indistinguishable from the three- and four-letter disorders that have shaped my life since childhood. I have heard people say that suicide is a permanent solution to a temporary problem, but there is nothing temporary about the chronic, unrelenting and hellish suffering of those with severe mental illness. For these people, for Luna and for me, the permanence of suicide is the precise appeal.

She is gone, and it is nearly a fact that other patients of mine will die by suicide. While I wish Luna had come to see me that day instead of taking her life, I understand that the hushed promise of suicide was too strong for her to overcome. There is a certain depth of illness the self cannot sustain, the colors we lose as we dive deeper underwater. Perhaps this is why depression metaphors so often include darkness and drowning.

I have forgiven myself of the shame I felt after Luna died. I see now that I was confusing sophistication with detachment, resilience with numbness. At the time I felt that responding to a suicide with grief was a sign of inadequacy, but I have come to realize that I should not expect death not to hurt, certainly not the death of someone I have tried to protect from that self-imposed fate.

Although research into the cause of chronic suicidality has, to date, been inconclusive and produced very few absolutes, I am willing to speak with certainty to tell you this: It is real. As real as the risk of stroke from nicotine use, as real as the ache of chronic pain, as real as the stigma of shame that discourages suicidal people from seeking care.

If you are thinking of hurting yourself, tell someone. If no one that you trust is around, tell a trained operator at the National Suicide Prevention Lifeline (1-800-273-8255) or a nurse in your local emergency room. Remember that when you are depressed, your brain is like a dangerous neighborhood; you should not go there alone.

(This content is not intended to be a substitute for professional medical advice, diagnosis or treatment. Always seek the advice of your physician or other qualified health provider with any questions you may have regarding a medical condition.) #KhabarLive