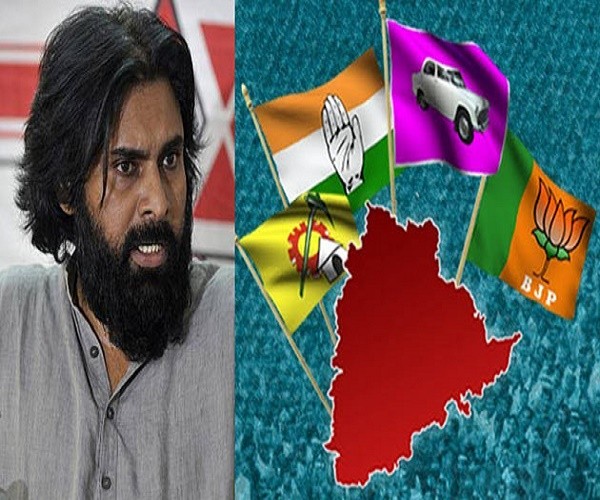 With an aim to bring down TRS, all the other parties formed a ‘Mahakutami’ which is trying to give a tough fight to KCR & team. But, the entry of Pawan Kalyan’s Janasena into Telangana elections is creating tension in the camp of Mahakutami.

This alliance which consists on congress, TDP, CPI and others are working on figuring out the contestants for all the constituencies. Other parties like BJP, MIM and CPM are finding their own ways to become a key-factors in forming the government. But, the allotment of seats among the alliance is becoming a huge problem as unsatisfied people tend to shift into other parties.

Also, this alliance is banking mainly on TRS opposite votes. So, arrival of Janasena may work in favour of TRS party and it divides the opposition’s votes. Also, people who don’t get seats may jump into Janasena who are ready to give them an opportunity. The major worry here is the division of votes as KCR’s vote bank cannot be touched, all the remaining parties should work on against TRS votes.

With the arrival of Pawan, it will be a great damage to Congress and team and the votes get dived and TRS becomes the single largest party. Many say that TRS is behind Janasena’s decision of competing in Telangana as both KCR and Pawan share a friendly relation. #KhabarLive

ALSO READ:  'Salar-E-Millat Came In My Dream And Asked Me To Show The 'Right Path' To His Sons Asad And Akbar Owaisi'