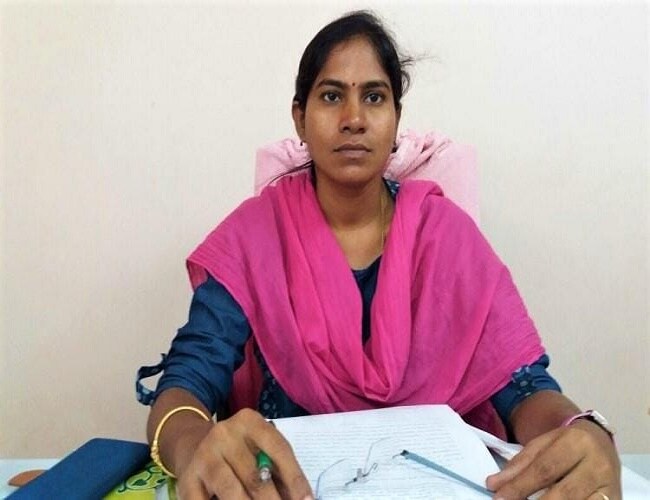 The daylight horrific murder of Mandal Revenue Officer (MRO) Vijaya Reddy in Telangana’s Abdullapurmet has left the state in shock, with condolences for the woman Tehsildar pouring in, even as her grieving family comes to terms with her untimely death.

Vijaya Reddy had two children — a 10-year-old daughter and a 5-year-old son, and was the first Tehsildar of Abdullahpurmpet after the office was opened around three years ago.

A former government teacher, she is reported to have resigned to pursue further studies and qualify as an MRO. She had also reportedly received an award for the best mandal revenue officer in 2018.

Did delay in land row result in murder?

According to officials, there was a controversy over several acres of land between Gowrelli and Bacharam villages with around 30 families staking claim over it. The man who set Vijaya to fire, K Suresh and his brother too were involved in the dispute.

Speaking to #KhabarLive, one of the family members of K Suresh said that there was a delay in processing their query for pattadhar passbooks and the case had been pending for years.

“Though officials have given clearance, the officials never transferred the lands on his (Suresh’s) name stating that there needs to be digital clearance,” the relative claimed.

Local media reports suggested that Suresh was asking for land pattadar passbooks to be issued in his name, and was pointing out that he already had his name on a 1/B document (which details survey numbers owned by an individual).

Speaking to the media however, Suresh’s uncle, Durgaiah, denied that Suresh was involved in the land row and claimed that the dispute was being handled by village elders.

Durgaiah also said that while Suresh was aware of the row and even knew that it was being heard in the High Court, he was not personally involved in the mediation. The family expressed shock at such an extreme step being taken by Suresh.

The government has now sought a report from district revenue authorities on the incident and about the alleged fallout over land.

Though delay in digitisation of records could have been at the heart of the issue, there has been unanimous and widespread condemnation over the ghastly murder.

Taking to Twitter, he said, “I am shocked beyond words about the Abdullapurmet MRO Smt. Vijaya’s brutal murder. No matter what the unresolved issue was, this sort of inhuman attack is reprehensible and has no place in a democracy. My heartfelt condolences to the family of Smt. Vijaya Reddy Garu.”

Congress MP Revanth Reddy also expressed his condolences to the bereaved family. He urged the government to provide necessary security to the officials.

ALSO READ:  The #MeToo Movement Marks The Rise Of A New Era In Indian Feminism

In a statement, the officials said that killing an official right in her work place is shocking and fearsome while stating that the government officials should be given enough security.

“We shall bring the culprit to book and ensure that the severest punishment is awarded at the earliest. Justice will be rendered to the victim and her family members,” DGP Mahender Reddy said.

A case of murder has been registered against the accused and the police said that they were investigating if anyone provoked Suresh to commit the crime.

Meanwhile, Angered by Tehsildar’s murder, revenue staff in Telangana to boycott work for 3 days. The gruesome act of burning and killing Vijaya Reddy, a Tehsildar or Mandal Revenue Officer (MRO) of Abdullapurmet at her office in Telangana’s Ranga Reddy district, has sent shockwaves among government employees and evoked widespread condemnation.

Vijaya Reddy was in her chamber on the outskirts of Hyderabad when a man walked in, and while talking to her, poured petrol and set her ablaze around 2 pm. The official died on the spot while two employees who tried to save the Tehsildar were injured.

An association of revenue officials called for protests across the state on Tuesday to demand severe punishment for the guilty. Scores of employees are expected to attend Vijaya’s last rites in Nalgonda district on Tuesday, and also plan to boycott duties for three days, as a mark of protest.

Stating that they had never seen such a heinous attack, they demanded protection to revenue officials who were carrying out their duties.

The police said the murder took place over a dispute relating to accused Suresh’s land in Bacharam.

The body of Vijaya Reddy has been taken to the Osmania Hospital for autopsy. A large number of revenue officials gathered at the hospital.

The Abdullapurmet mandal or block was carved out recently and Vijaya Reddy was its first MRO. She is survived by her husband and two children.

Director General of Police M Mahender Reddy also condemned the incident and said that such a barbaric act was totally unacceptable in a civilised society.

“We shall bring the culprit to book and ensure that the severest punishment is awarded at the earliest. Justice will be rendered to the victim and her family members,” he said. #KhabarLive