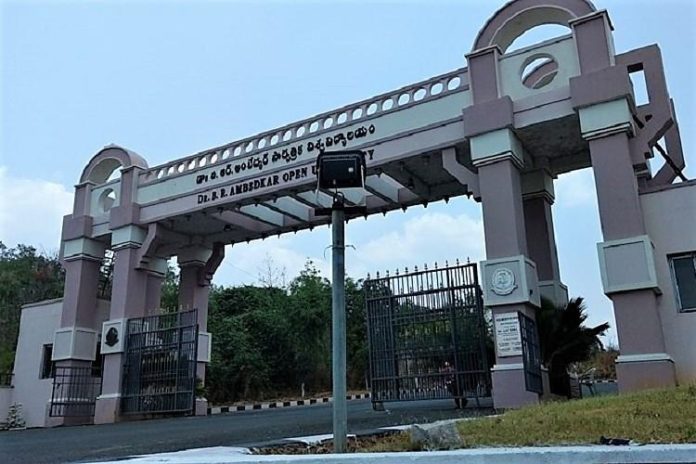 A major row is underway at the Dr B R Ambedkar Open University in Hyderabad as five deans and 15 directors have tendered their resignation letters to protest key decisions made by the outgoing Vice Chancellor of the institute.

The term of the Vice Chancellor ends on July 24 and the protesting faculty have claimed that the VC was taking crucial decisions in violation of norms, including the appointment of a new Registrar, with just hours to go before the end of his term.

In a letter to Janardhan Reddy, secretary of the Telangana Higher Education Department, the Faculty Teacher’s Association said that the VC, K Seetharama Rao, had appointed a new Registrar from a ‘non-academic’ post.

Speaking to #KhabarLive, the association’s president, Professor Anand Pawar said, “As an outgoing VC, he cannot take any decisions, especially financial decisions, in the last six months of his term, according to directions by HRD Ministry.”

“The present Registrar’s term is going to end on July 31 and the government has to appoint a new registrar. However, the VC has appointed someone to fill up the post with less than 48 hours to go before his term expires,” he adds.

The Faculty Teacher’s Association alleged that the VC misled them and also hired a person from a ‘non-academic’ stream as the Registrar.

Alleging that important decisions were being taken by the VC by consulting only the people he ‘favoured’, the letter adds, “This is a pathetic situation which is going to embroil into unmanageable crisis.”

The association further alleges that the VC is acting without regard for the University’s financial resources.

In conclusion, the letter said, “We the teachers of the University feel concerned and pained to record our protest and request your kind self to react and resolve the impending crisis at the earliest and put an end to the administrative acrobatics unmindfully displayed by Prof. Seetharama Rao.”

Speaking to #KhabarLive, VC Seetharama Rao claimed that the faculty teachers were ‘needlessly’ raking up a controversy.

“We have two streams of teachers in our university and one of them is the Faculty Teacher’s Association, while the other is known as Student Support Services Teachers. Barring their designation, their pay scales, selection method and many other things are common. The two associations always compete for positions and this is a fallout of that,” he said.

“There are precedents where various category of teachers worked as Registrars and sometimes as Director (Academics) also. I am an outgoing VC and my term has ended. The former registrar is also retiring on July 31. Naturally, we have to make stop gap arrangements. Whatever arrangement we made now is purely temporary. Within a short time, a new VC is going to come. The VC will make their own appointments,” Rao added.

Rao also said that he had discussed the issue with the Secretary of Education and Commissioner of Higher Education before taking the decision.

“What wrong have I done? These people are creating nuisance because they have vested interests. They want VC from their own faculty association and in that process they are levelling baseless allegations,” the outgoing VC alleged.

Meanwhile, the faculty also met with Janardhan Reddy said that they were given an assurance that the state government will look into the issue. #KhabarLive