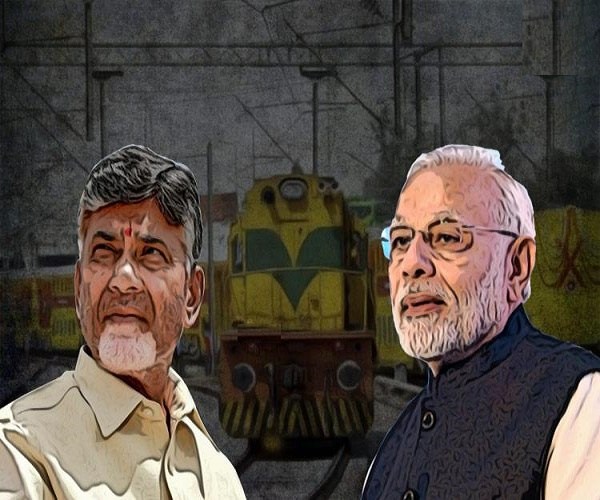 With just months to go for simultaneous Legislative Assembly and Lok Sabha polls in Andhra Pradesh, the state is witnessing heated politics over the latest move by the Centre to fulfill a long-pending demand by granting a new railway zone with its headquarters at Visakhapatnam. Earlier this week, Railway Minister Piyush Goyal announced the new railway zone, as committed by the Centre under the Andhra Pradesh Reorganisation Act 2014.

However, all has not gone down well as both the Andhra Pradesh and Odisha government have taken up issues with the new zone.

The new zone has been named South Coast Railway (SCoR) and will comprise Guntakal, Guntur and Vijayawada divisions. However, it splits the Waltair division into two; one to be incorporated in the new zone by merging with the neighbouring Vijayawada division, and the other to be converted into a new division with headquarters at Rayagada in Odisha under East Coast Railway (ECoR).

The ruling Telugu Desam Party (TDP) has contended that a large chunk of the revenue will be diverted to newly formed Rayagada division in Odisha as the majority of the area, including Vizianagaram and Srikakulam districts of Andhra Pradesh, were merged with it.

Andhra IT Minister Nara Lokesh, who is also Naidu’s son, claimed that the part of Waltair division merged with East Coast Railway was earning Rs 6,500 crore annually through freight traffic while the part given to the new zone has revenues of only Rs 500 crore through passenger traffic.

“During bifurcation of the state, revenue-making Hyderabad was given away to Telangana and now revenue-making part of Waltair division has been given to Odisha,” he said.

Meanwhile the Biju Janata Dal (BJD) has called the move ‘death bell to railways in Odisha’ as the old Waltair division was headquartered at the state’s capital in Bhubaneshwar and has now been split.

“With the creation of South Coast Railway with headquarters at Vishakapatnam and transferring major assets and part of the Waltair Railway Division (Vishakapatnam) to this new Railway Zone, it is yet another attempt by the Centre to destroy the railways in Odisha.

If the BJP is acceding to a political decision in case of Andhra Pradesh, why is it neglecting the rightful demand of Odisha for having the state as one Zone of ECoR under its jurisdiction,” the BJD said in a statement.

Does it really help?
Meanwhile, observers also opine that the Centre could have taken a better decision, especially given the delay in granting the zone.

“The Centre’s belated announcement on Visakhapatnam Railway Zone lacks conviction and it metes out step-motherly treatment to the people of northern Andhra. Shifting of Division headquarters from Visakhapatnam and transferring of revenue earning segments of Visakhapatnam division to Odisha do not do justice to this region.

It also shows that the people’s representatives of all hues in the state have let down the people of northern Andhra,” retired bureaucrat EAS Sarma, a former Secretary to the Union government, tells #KhabarLive.

“It is a half-hearted announcement and it may not really give full benefit to Visakhapatnam. Injustice is being done and it seems to be a matter that is not to be celebrated,” he adds.

Some observers also point out that there is also ambiguity in the establishment of a Railway Recruitment Board.

One of the main points of contention for those who demanded a railway zone with its headquarters at Visakhapatnam was that presently, the Railway Recruitment Board (RRB) in Bhubaneshwar is where locals from the state have to travel to, in order to apply and attend interviews for jobs in the Visakhapatnam region as well.

However, the zone will now be able to decide the starting points of trains within the divisions, which is expected to help generate more revenue for Andhra Pradesh. Meanwhile, others say that while it may help the state in some aspects, there is going to be little difference made in the long run.

“It is a low-cost decision for the Centre. Establishment of an office in the larger sense doesn’t make a serious difference. However, there is always an emotional attachment to such things,” says retired bureaucrat and Lok Satta party founder Jayaprakash Narayan.

“Coastal Andhra and Visakhapatnam in particular feels strongly about this. There will be some stimulation of the economy because some offices will come up, but that’s about it,” he added. #KhabarLive