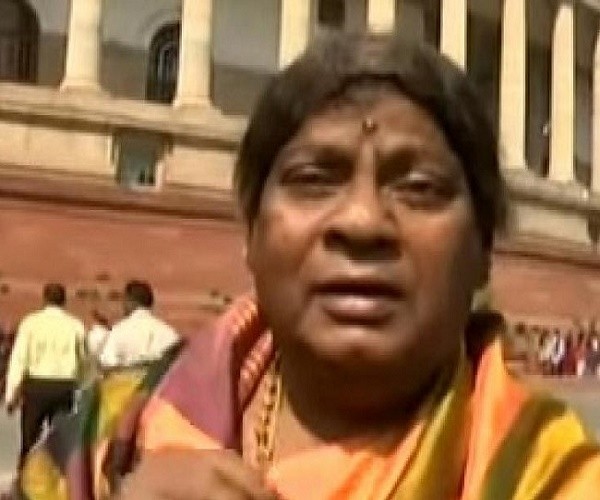 Ever since the Telugu Desam Party has raised a banner of revolt against the NDA government on the special category status issue and non-implementation of promises made in the AP Reorganisation Act, party MP MP from Chittoor Dr N Siva Prasad has been entertaining his fellow parliamentarians and national media persons with his fancy dressing and theatrics.

On Monday, Sivaprasad wore the costumes of a woman to express his resentment against the NDA government, at a time when his party along with YSR Congress party were gearing up to table the no-confidence motion in the Parliament.

Dressed as a woman wearing a yellow saree, Sivarprasad sported a wig with a plait having a flower tucked into the hair and his face with clean shaven moustaches. Congress MP Renuka Chowdhury joined Sivaprasad in his protests.

The MP’s saw him making quite the splash when he carried water-laden earthen pots into the Parliament. His fancy dress show never fails to grab the attention of the cameras and provide comic relief in between protests.

In the past, Sivaprasad came to the Parliament dressed up like a fisherman, iconic leader Sardar Vallabhbhai Patel, Lord Krishna, a black magic practitioner and a foreteller, besides as a cleric, a Christian priest, Santa Claus, Mahatma Gandhi, TDP founder NT Rama Rao among others. #KhabarLive