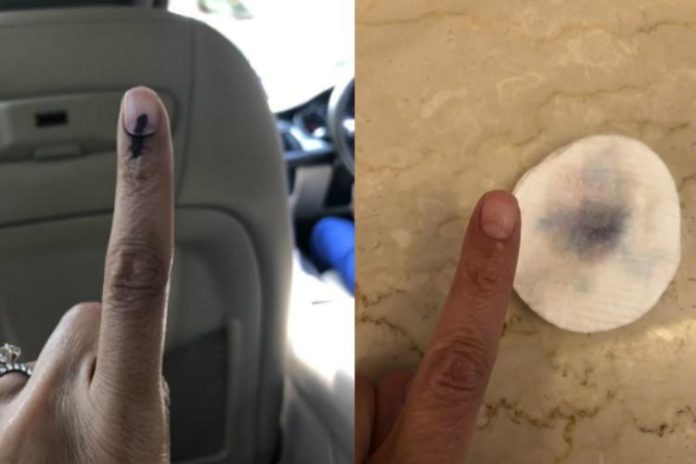 The revelation could have far-reaching implications as the “indelible” ink is meant to ensure that a voter can vote only once. Many people during the first phase of polling claimed that the “indelible” ink applied to mark the index finger of the voter immediately after casting their vote could be removed just by applying some chemical remover on it.

After #KhabarLive demonstrated how the indelible stain on their index fingers disappeared soon after applying some nail polish remover on them, a lookup of Twitter showed that many other people also shared similar experiences on the micro-blogging site.

The revelation could have far-reaching implications as the “indelible” ink is meant to ensure that a voter can vote only once.

#KhabarLive tweeted photographs of fingers before and after applying nail polish remover on the ink mark on it. The image taken after the application of the solution showed a stainless finger.

“I voted. I got inked. I did not believe the people who said that indelible ink is washing off. So I tried nail polish remover — and magic — the mark is gone @SpokespersonECI. What’s ECI’s response,” #KhabarLive wrote in the tweet.

The Election Commission, however, said that they had sought a report on the ink and found that it was duly tested by the Council of Scientific & Industrial Research (CSIR) before the elections.

Deputy Election Commissioner Chandra Bhushan said: “Since the first general elections in 1951-52, the ink has been used and before every election it is tested in the lab. Now we asked for the report and found the lab test was done by CSIR.”

He said that all due processes were followed and such incidents should not happen. #KhabarLive