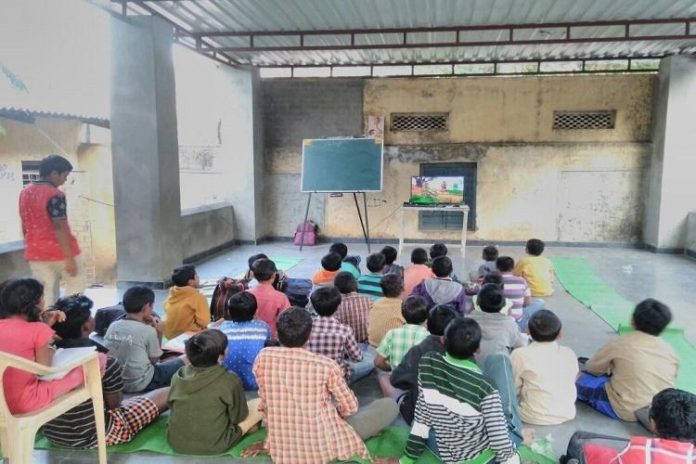 Officials in Hyderabad’s Education Department find themselves in an awkward position when you ask them about the city’s first Urban Residential School (URS). The school, which is a requirement under the Sarva Shiksha Abhiyaan (SSA) for underprivileged children, was started in the city in 2010-11. But what happened after that – to the school, its teachers, its students – no one seems to have a clue… almost as though all traces of it vanished!

In the available documents, it is clearly stated that the first URS’s were started in erstwhile Andhra Pradesh in 2010-11 under the SSA. While one of the schools was set up in Khammam district, the other was set up in Hyderabad. A URS, as the guidelines state, is meant for deprived children or street children like orphans, runaway children, children of single parents, rescued child labour and children of HIV infected parents etc. in urban areas.

On the brighter side, the one in Khammam district is still functional, and officials say it’s a role model for other URS’s to follow. Ask them about the one in Hyderabad, and it’s a different story. For instance, Sridevi, state coordinator for URS in Telangana, told #KhabarLive, “The URS in Hyderabad that came up in 2010 or 2011 did not have their own building. An NGO was supposed to run it, but it changed hands many times… we are unsure of what happened to the school.”

The Hyderabad District Education Officer, Venkata Narasamma, also responded along the same lines. She was not even sure what happened to the children who studied in that school. “We do not know; I am only familiar with Khammam URS,” was all she had to say about the matter.

Woes of the new Hyderabad URS
With almost no idea about the 2010 URS in Hyderabad, the Education department in 2017 started another URS within the Eramanzil Government School. This time should have been different, but the troubles of this Hyderababdi URS also seem plenty.

This Eramanzil URS started out with over 30 children in a shed that acted as a classroom, with just two rooms allocated for the children to live within the premises.

This school within another school shut down for the first time in April 2018. It was restarted again, after much deliberation, in September that year, but the number of students had dropped to 15. However, it was shut again in January 2019.

Department officials say that the school was shut because there were not enough students at the school. The official line is that the number of students did not match the requirement 120 students per URS. However, the guidelines say that up to 120 children can be enrolled – there is no limit on the minimum number of children a URS can have.

The Department now intends to restart the Eramanzil URS by designating an NGO to find enough children to operate the school.

But the NGO, Rohin Hood Army (RHA), that ran the URS from 2017-19 says the number of children dropped at the school due to the frequent closures and lack of government initiative.

“It’s the state government’s responsibility to bring these children to school but the department has not taken any initiatives, they never tried,” alleges Venkat, a member of RHA who worked closely with the Eramanzil URS. He added that the school, before being shut in 2019, was also understaffed and under-resourced.

“The building was given by at Eramanzil Government School, the painting, the sheds, carpentry work, the mattress was all provided for the school by the NGO. There were just two teachers and two people to manage the children, who later resigned. They did not give funds for groceries either – we got them through donations only,” said Venkat.

He added that the children at URS did not have access to nutritious food and there was no state support. “The opposite school within the same compound used to be under the mid-day meal scheme, but they never shared the food even if there was excess food. The excess food was fed to the dogs while children from the URS would just look on from their classrooms. The department would only release funds if there were enough children at the URS,” he added.

Not just basic infrastructure like chairs and tables, the students did not even have access to books, says the NGO. “Three months into the term we got to know that the books meant for the URS were lying at a government school store in Ameerpet. We were never informed,” Venkat added.

These 15 children now reside at the government school in Eramanzil and study at a tribal girls’ school at Ameerpet.

Education department officials say this is only a temporary arrangement and that these children will be transferred back once the Eramazil URS reopens. And as for the missing school, the officials hinted that the school could have closed and the department lost track of children once they severed ties with NGO that operated the URS.

Administrative troubles
This ‘missing’ school is a testament to the troubles of the scheme and the Education Department as well. In 2017 for instance, Telangana Chief Minister K Chandrashekar Rao had tasked the education department to fill up the 377 vacancies in 29 districts across the state. Two years later, the vacancies are yet to be filled in many districts.

When it comes to the URS’s, officials say many existing don’t even have their own buildings. Further, The officials are yet to make proposals for URS’s for the two new districts in the state. “We are not even sure if the proposal will get approved,” Sridevi said. #KhabarLive