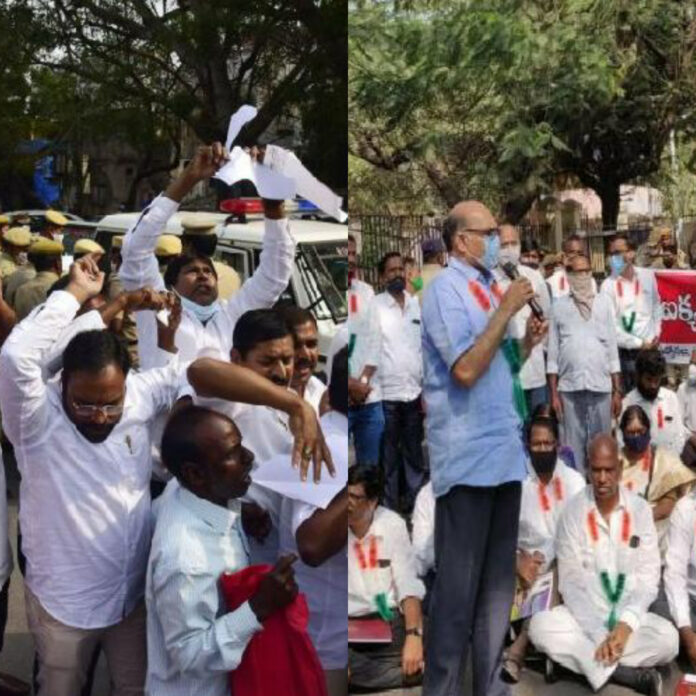 Government employees and pensioners say the proposed 7.5% salary hike over basic pay is too meagre to the present scenario, they want to get what they demanded in their memorandum.

Government employees in Telangana took to streets to lodge their protest against the Pay Revision Commission (PRC) report, which recommended 7.5 per cent salary hike over basic pay. Furious over the meagre hike recommendation by the panel, the employees and pensioners made it clear that nothing less than 43 percent fitment (salary hike) will be acceptable to them.

Several have come out raising slogans against the government, on streets in Hyderabad and other parts of the state and set afire the copies of PRC report. Employees have also held protests at the temporary secretariat  BRK Bhavan. Leaders of the employees’ unions said the Pay Reduction Commission is a huge disappointment to them.

Expressing their unhappiness over the PRC report, a delegation of employees’ leaders met the committee headed by Chief Secretary Somesh Kumar. They warned that if their demands were not met they would have no option but to go on strike. The leaders said they had huge expectations and were hoping that the first PRC in Telangana state would enhance their self-respect.

Telangana Non-Gazetted Officers’ Association (TNGO) President M Rajender said PRC recommendation for 7.5 per cent fitment is unacceptable. “The employees had thought that after formation of Telangana state, they will get reasonable salaries but PRC report has come as a huge disappointment to over nine lakh employees,” he said.

He said when the state was facing financial problems during COVID-19, the employees extended all the help and claimed that the state’s economy is now doing well. Pointing out that in the past the government had given 43 per cent fitment, they demanded that the same should be provided now

Recalling that the employees’ unions participated in the movement for Telangana state, Rajender said that the TNGO is ready for another fight for their demands. What further angered the employees was PRC’s recommendation to cut down HRA. PRC recommended a minimum pay scale of Rs 19,000 while employees’ union were demanding Rs 25,000. The only positive recommendation for employees was increasing the retirement age from 58 to 60.

Leaders of the United Teachers’ Federation (UTF) staged a protest near the state secretariat. They tore the PRC report and raised slogans against the government. Police detained the protestors.

Leaders of opposition Congress were also detained by the police as they tried to stage a protest near the Secretariat. Party leader Vamshi Chand Reddy demanded that the government immediately hold talks with the employees and announce revised fitment.

Pensioners also slammed the PRC report. Leaders of Pensioners’ Association said they waited for the report for 32 months and were expecting 60 per cent fitment.

The opposition parties hit out at the TRS government for the PRC report. BJP state President Bandi Sanjay termed the report a drama, and alleged that the Chief Minister betrayed the farmers. He sought to know if the three-member committee was allowed to function independently.

“The three member committee heard the views of the three employees associations, one by one regarding their views and representations with regard to PRC recommendations and other issues. Chief Secretary has responded positively on employees issues pertaining to PRC recommendations and other related matters which will be brought to the notice of Hon’ble Chief Minister,” said a government statement. #KhabarLive #hydnews