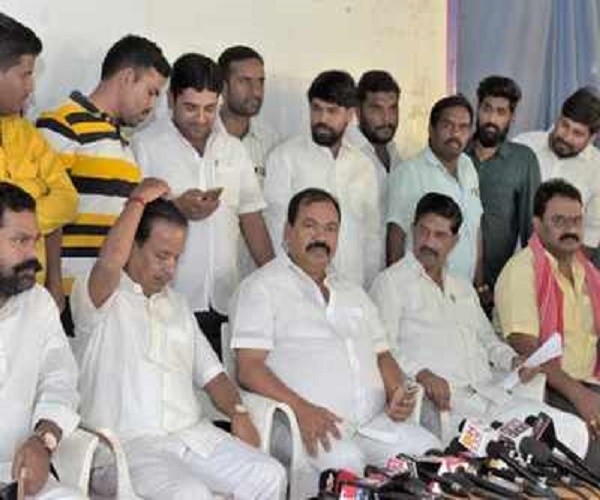 Trouble is brewing in the Telangana Congress as a group of 40 leaders and aspirants, who were denied tickets for the upcoming Assembly elections in the state, have decided to form their own ‘Rebel Front’ and contest independently in their home ground.

A group of rebel leaders, led by former Ministers Boda Janardhan (who aspired for the Chennur ticket) and Vijayarama Rao, who wanted the Station Ghanpur ticket for the Congress, met at the former’s house.

Speaking to #KhabarLive, Janardhan said that the mahakutami (grand alliance) — being forged in the state with the Congress, Telugu Desam Party (TDP), Telangana Jana Samithi (TJS) and CPI — was handing out tickets to those who had defected from other parties and those who had lost more than three elections consecutively.

“Our demand is simple. We want justice. Or else, we will form our own front and around 40 of our rebels will contest independently. If Congress loses, Telangana Pradesh Congress Committee (TPCC) President Uttam Kumar must take responsibility. He is the one who has meted out injustice and gave tickets to weak candidates,” he said.

Boda Janardhan had joined the Congress in 2013, when he defected to the party from the YSRCP along with two other MLAs.

“Those who parachuted into the party don’t deserve tickets. How they were screened and selected must be explained by the TPCC President,” Vijayarama Rao told reporters.

Speaking to #KhabarLive, Janardhan said, “The Bahujan Left Front (BLF), which is a joint front of 28 organisations and parties, has reached out to us and begun talks. Their front and our front are planning to contest as a joint alliance. They have promised us 40 seats that we want to contest.”

When asked if the Congress or TPCC reached out to them, he said, “Congress leaders have reached out and asked us not to contest, but we are determined. The TPCC chief is yet to reach out to us. Injustice has been meted out and we are demanding answers. We have the right to contest and we are confident of victory. Our constituents are asking us to contest, which is why we are going with them.”

Meanwhile, rifts were also evident in the Telangana unit of the TDP after a few leaders were denied tickets for the upcoming polls.

Senior TDP leader Bandru Shobha Rani was also upset after being denied a ticket and was in tears as she spoke to reporters outside NTR Bhavan, the party’s headquarters in Hyderabad.

Speaking to #KhabarLive, she said, “We have done hard work on the ground. When the party was in dire straits, we were the ones who worked. We participated in several agitations and protests for the party, yet there are people who are not even being allowed into the office. Our entire life and families are destroyed.”

“As a woman, I put my family aside and worked for the party. In 2004, it was on a call given by Andhra Pradesh Chief Minister and TDP President N Chandrababu Naidu that I entered the party, but what have I got? Many leaders promised me the Alair ticket, but they have cheated us,” she added, as she broke down.

Telangana goes to the polls on December 7 and counting takes place on December 11. The last date for filing nomination is November 19. #KhabarLive

Read Our Analysis: Why Telangana Congress Leaders Leaving The Party In Lurch During Elections?