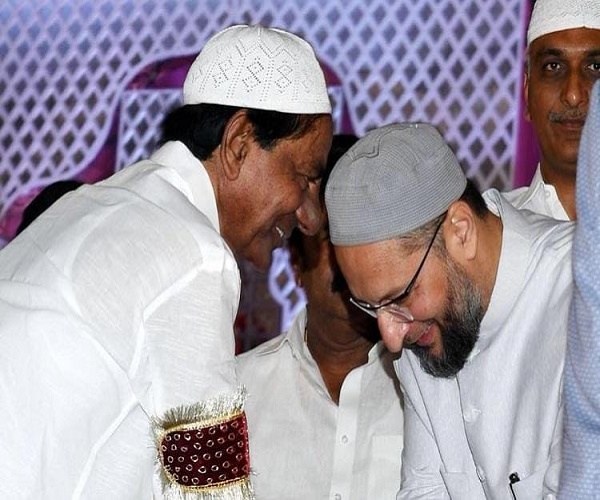 Did the All India Majlis-e-Ittehad-ul-Muslimeen (AIMIM) led by Hyderabad MP Asaduddin Owaisi oppose the ‘purification’ of electoral rolls in the city in 2015 but support the same drive across the state of Telangana for political gain? A document accessed as part of an RTI query to the Election Commission of India (ECI) seems to suggest so.

It was in 2015 that the National Electoral Roll Purification and Authentication Programme (NERPAP) was undertaken by the ECI, aiming to delete duplicate and bogus voters in the electoral rolls by linking Aadhaar with voter ID cards.

In a letter to then ECI Secretary Sumit Mukherji dated August 8, 2015, the Telangana Chief Electoral Officer (CEO) at the time – Bhanwar Lal – had said that he had a phone call with Telangana Chief Minister K Chandrasekhar Rao on July 20, 2015. The duo discussed that the progress of NERPAP was satisfactory across the state, except under the jurisdiction of the Greater Hyderabad Municipal Corporation (GHMC).

The CEO pointed out that while the progress in other districts was around 82%, in the 24 Assembly constituencies under the GHMC area, it was a dismal 45% at the time of writing the letter. These constituencies included several seats in Hyderabad’s old city area that have been AIMIM strongholds for years.

The letter pointed out that AIMIM was the only party which opposed the linking of Aadhar with elector’s photo identity card (EPIC) in Hyderabad, but did not raise any objections about the same in Nizamabad district, another region where it has a significant presence.

Pointing out that there was ‘poor progress’ of the programme in GHMC area, the CEO’s letter said, “There are many complaints stating that Booth Level Officers (BLOs) have not visited their houses in GHMC area, whereas there is not even a single complaint from the (then) remaining 9 districts, falling outside of GHMC area in Telangana state.” It added that this was the case despite several visits to the constituencies by the CEO, his officers, review meetings and video conferences.

“It clearly shows that the complaint in the instant case is made by vested interests, who are vehemently opposing the implementation of NERPAP in Hyderabad district of GHMC,” the letter stated.

Political observers have often pointed out that a low voter turnout increases chances of the party’s candidates in winning the seats. The letter has only raised more eyebrows.

AIMIM denies allegation
However, the AIMIM denied the allegations and said that it had ‘principally opposed’ the NERPAP throughout.

“We had opposed the Aadhar linking totally. The NERPAP was first started as a pilot project under GHMC limits and we had opposed it principally. The ECI did not have the mandate to link Aadhaar with voter IDs. The rules were also not formulated clearly during the voter list revision. It was just an executive order, which is why we opposed it,” says AIMIM MLC and senior leader Syed Hasan Jafri.

While the NERPAP was struck down by the Supreme Court in August in 2015 itself, the Telangana State Election Commission had reportedly deleted 27 lakh voters from the rolls. In 2017, the ECI initiated the Intensive Revision of Electoral Rolls (IRER), which was supported by the AIMIM.

“When the NERPAP was stopped, a lot of deletions had already taken place. In fact, we had demanded for the intensive revision that time itself. Intensive revision was a different exercise that was taken up in 36 constituencies across Telangana in 2017 which we supported,” Jafri clarifies.

‘Congress stands vindicated’
Senior Congress leader and four-time MLA from Sanathnagar, Marri Shashidhar Reddy, who alleged several issues of discrepancies in the electoral rolls ahead of the 2018 Legislative Assembly polls in Telangana, says that the RTI documents have vindicated his and the party’s stand.

“We produced a large amount of evidence in the High Court, particularly with respect to the AIMIM-dominated constituencies. There have been instances of a large number of voters enrolled in a single house, under locked homes, untraceable addresses and even vacant plots. There are also instances of names without house numbers and just with the name of a locality,” he says.

The Congress leader also pointed out that this has exposed “how porous the entire system is and how easy it is for a party with physical domination in certain areas.” “They don’t allow officials involved in the cleaning up of electoral rolls to function freely. This is how they (AIMIM) have been doing it,” he alleged.

Speaking about the difference between 2015 and 2017, Shashidhar said that during the first programme, the unofficial understanding between the AIMIM and the Telangana Rashtra Samithi (TRS) had not been made during the NERPAP which is why the Majlis cried foul when it came to linking Aadhaar with the voter IDs.

“The first time the AIMIM was afraid because there was no understanding. In 2017, the Intensive Revision of Electoral Rolls was again launched as a pilot project in 36 urban constituencies of Telangana. Coincidentally it was the same CEO, Bhanwar Lal, in both 2015 and 2017.

Both the TRS and AIMIM were quite satisfied in the 2017 because they knew that the names of voters faithful to them as well as bogus ones would remain safe. It reveals that the whole exercise was a farce to delete names at will. The TRS and AIMIM have been hand in glove,” Shashidhar added.#KhabarLive