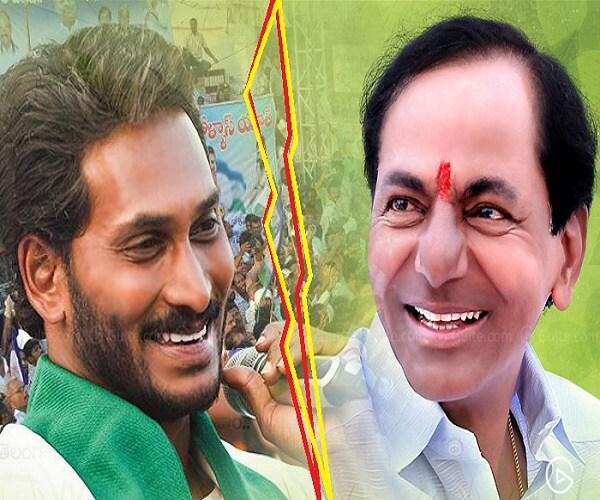 Andhra Pradesh Chief Minister YS Jagan Mohan Reddy and his Telangana counterpart K Chandrasekhar Rao seem to be heading towards some hostility. And the bone of contention that has lifted the veil off a carefully constructed image of friendliness and brotherhood, is the Kaleshwaram project.

A ‘national status’ tag for major irrigation project being planned by Telangana, was opposed strongly in the Supreme Court by the Andhra Pradesh government – despite the fact that Jagan himself was a chief guest at the Kaleshwaram inauguration by KCR just a few months back.

So what gives? The answer is simple: the bridge built between KCR and Jagan is going under the waters of the Godavari.

The bonhomie between KCR and Jagan was built on the simple adage of enemy’s enemy is a friend – the common enemy being Chandrababu Naidu. Also, the two believed that if there was chance of a third front, being together will allow them to become a strong block. In public, KCR and Jagan maintained a friendly relationship in the run up to the elections in May, and for some time after too.

KCR demonstrated his jubilation over Naidu’s downfall by attending the Jagan’s swearing-in ceremony in Vijayawada on May 30. On the occasion, KCR stated that he and Jagan would act as statesmen and strive for amicable settlement of inter-state disputes over sharing of river waters, unlike Chandrababu Naidu who, he alleged, used the issue for political gains. Jagan, in turn, “gifted” Andhra’s buildings in Hyderabad, to the Telangana government – a gesture that the TDP alleged was a quid-pro-quo for KCR meeting Jagan’s election expenditure.

For the two sister states though, troubled by the ghosts of bifurcation, it looked as if Jagan and KCR could provide a political salve with their brotherhood. However, Jagan has decided to ditch this brotherhood as soon as its convenience reached its expiry date.

Kaleshwaram vs Polavaram
In June, Jagan Reddy was a chief guest at the inauguration of the Rs 80,000 crore Kaleshwaram Lift Irrigation Project (KLIP) in Telangana. The project seeks to build a chain of barrages at Medigadda, Annaram and Sundilla, with an ambitious aim to bring 38 lakh acres of land under irrigation by harnessing 180 TMC of Godavari water. KCR’s brainchild, this project has earned him the moniker of ‘waterman of Telangana’ from some quarters.

And to fund this mega irrigation project, KCR has been trying to get a ‘national status’ tag for it – which would mean that 90% of the money would come from the union government.

And to protect its interests, the Andhra Pradesh government headed by Jagan filed a counter affidavit in the Supreme Court, opposing the Telangana government’s plea for a national status tag for Kaleshwaram.

The Andhra government in its affidavit contended that the Telangana government under the stewardship of KCR has initiated the Kaleshwaram project – and several other irrigation projects – to utilise 450 TMC water from the Godavari, in contravention of the Godavari Water Disputes Tribunal and the Andhra Pradesh Reorganisation Act, 2014. Andhra also raised serious apprehensions over the fate of the Dhavaleswaram Barrage and Polavaram dam in view of the “illegal project” coming up in Telangana.

The Andhra government’s affidavit in the Supreme Court comes even after KCR and Jagan held one-to-one meetings on water issues, and made way for two rounds of meetings with experts and officials in irrigation departments. KCR and Jagan volunteered to be architects of an ambitious project for diversion of the Godavari water to the Krishna river basin by executing canals with a length of 340kms to draw 4 TMC of Godavari water everyday to Srisailam/Nagarjuna Sagar. The move however failed to make any further progress as experts from both the states expressed doubts over its feasibility.

Strikingly, both Chief Ministers failed to display any proactive gestures over withdrawing petitions filed in the apex court by the two state governments against Kaleshwaram and Polavaram projects.

The water sentiment
The reason for Jagan’s U-turn? Water is not something that Jagan is willing to risk. Because when water becomes a sentiment, Jagan cannot afford to swim against the tide by compromising with the neighbouring state. If he does so, the opposition TDP will obviously capitalise on his ‘soft approach’ – just like Jagan himself did while in opposition.

Before he came to power in the state, Jagan had launched a tirade against the Chandrababu Naidu government for allegedly compromising on the state’s riparian rights when Telangana was “illegally” pursuing Kaleshwaram and other projects. Jagan undertook “Jal deeksha” in Kurnool in 2016 to highlight Naidu’s failures. His fight helped him acquire an image of a defender of the state’s irrigation interests.

Now, it’s Naidu’s turn to turn the tables on Jagan, saying the latter is yielding to Telangana’s KCR at the expense of Andhra’s interests. The TDP cites Jagan’s “meek” acquiescence of the Kaleshwaram project as evidence of Jagan’s “surrender” to the TRS leader. Observers feel Jagan’s sailing with KCR on irrigation matters did not go well with farmers in Rayalaseema and coastal Andhra regions, forcing the YSRCP leader to look back and revisit his stand.

In the history of the irrigation projects in the two states, seen in isolation and without the filter of Jagan-KCR bonhomie, this is only a logical continuation. The KCR government has sought to scuttle the Polavaram project by filing a batch of petitions in the Supreme Court opposing the designed height of the dam.

KCR growing impatient?
It’s not just the Supreme Court affidavits though – Jagan’s decision to merge the Andhra Pradesh State Road Transport Corporation (APSRTC) with the state government, has put his Telangana counterpart on a sticky wicket.

Andhra’s merger decision triggered a similar demand from the employees of the Telangana State Road Transport Corporation (TSRC). KCR’s saying no to the demand has led to an ongoing indefinite strike, providing ammunition to the opposition in Telangana – and letting KCR’s image take a severe beating. His displeasure with Jagan was visible at a media conference sometime back. “Let us wait for a few months to watch how they (AP government) will do the merger,” an impatient Rao grudgingly shot back. #KhabarLive