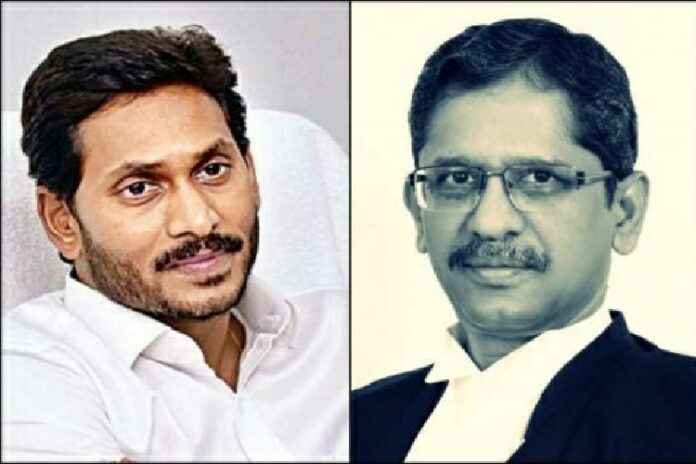 The Andhra Pradesh chief minister Jaganmohan Reddy’s ongoing confrontation with the state judiciary took a dramatic turn Saturday evening when he levelled serious allegations against Justice N.V. Ramana of the Supreme Court – the judge who is due to become the next chief justice of India (CJI) – as well as the chief justice and several other judges of the Andhra high court.

Reddy spelt out his allegations in a letter to CJI S.A. Bobde, perhaps the first time in the republic’s history that a chief minister has formally accused sitting members of the higher judiciary of political bias and even corruption.

Later, at a press briefing, the chief minister’s principal advisor, Ajeya Kallam, distributed copies of Jagan Reddy’s letter – dated October 6, 2020 – and also read out a note in which the chief minister alleged that Justice Ramana had used his influence with the erstwhile Chandra Babu Naidu-led Telugu Desam Party (TDP) government in the state to favour his daughters.

Since this specific allegation figures in the FIR that was registered last month on the Amaravati land allotment issue and which the AP high court has injuncted the media from reporting, #KhabarLive is refraining from providing any details of the charges. In another order, the high court also put on hold a report submitted by the cabinet sub-committee of the Reddy government on various acts of commission and omission of the previous TDP government.

According to Kallam, the Andhra Pradesh government believed that Justice Ramana has played a crucial role in swaying judicial appointments in the state courts, which Reddy believes was done to swing decisions in favour of TDP leaders who are facing multiple corruption charges. He claimed that the Jagan Reddy government has established through a probe that former chief minister Naidu and many others associated with his party had amassed “huge wealth” by “illegal means”.

The media note said that Justice Ramana and his “cohorts” had allegedly acted against his government. The Andhra Pradesh government further accused the Supreme Court judge of sharing a close relationship with the former TDP chief minister. “I am making this statement with utmost responsibility. I may only bring it to your notice that a former judge of the honourable Supreme Court, Justice Chelameswar, placed this fact on record with evidence,” Reddy’s letter said, while emphasising Justice Ramana’s alleged proximity to Naidu.

The evidence the chief minister referred to is the fact that the opinion Justice Ramana expressed in a letter to the CJI in 2017 about the suitability of certain judges for the AP high court was identical to what Naidu had also written about them as chief minister.

Kallam, who also served as chief secretary during the Naidu government, told reporters that “the government deemed it fit to speak to ensure that dignity of all institutions of the state is preserved”. After reading out statement, he wound up his media interaction without taking any questions from the media. Initially, there was a talk of the chief minister himself holding the media meet but the job at the last minute was entrusted to Kallam.

In his letter to Chief Justice Bobde, Jagan Reddy cited instances of how Naidu was allegedly scuttling investigations and functioning by using his “cohorts” in the state judiciary. Reddy’s letter alleged that Justice Ramana helped the Naidu regime handpick six out of an eleven-member panel of members from the high court bar and promoted them as acting judges.

“Justice N.V Ramana has been influencing the sittings of the High Court including the roster of a few Honourable Judges and instances of how matters important to Telugu Desam Party have been allocated to a few Honourbale Judges…,” the Chief Minister alleged in the letter, adding that he has annexed documents which show the “nexus” between Justice Ramana, TDP, and a few judges of the high court.

“With a sense of pain and anguish at the politicisation of institutions personally monitored by Chandrababu Naidu through honourable sitting Judges of Supreme Court, facts would clearly demonstrate that the august institution of the High Court is being used to destabilize and topple the democratically elected Government of the State of A.P. with indelible trail leading back to the overt and covert actions of Chandrababu Naidu through Honourable Justice N. V. Ramana,” Reddy said in his letter.

The ‘media note’ issued by Reddy made further allegations:

– “Since the new government undertook the enquiry into the actions of Chandrababu Naidu in his regime between 2014-2019, it is now clear, that Justice N. V. Ramana, started influencing the course of administration of justice in the State, through the Chief Justice Jitendra Kumar Maheswari.”

The High Court has passed nearly 100 orders negating a slew of key decisions of the Jaganmohan Reddy government in the last 18 months of his rule. The decisions put on hold by the High Court include decentralisation of the administration by way of shifting capital out of Amaravati, abolition of the AP Legislative Council and the removal of AP State Election Commission N. Ramesh Kumar.

“The government decided to demolish encroachments on the river bed to safeguard river ecology but the process was put on hold by the court,” the media note said.

The opposition TDP says Jaganmohan Reddy, who assumed the office of chief minister on May 30, 2019, has decided to take on the judiciary head on in the light of his own cases expected to come up for final hearing shortly. The TDP’s former vice-chairman of the state planning board, C. Kutumbha, in a TV discussion, accused Reddy of playing martyr by blaming the opposition parties and judiciary for his own “sins”.

The TDP said that the YSR Congress chief is trying his best to ward off his imminent arrest in the cases pending trial in the CBI and ED special courts. In the process, Reddy is trying to scuttle the prospects of Ramana becoming CJI by dragging him and his family members into “fictitious” land scams in Amaravati, the party charged.

In the wake of the Supreme Court’s direction to the chief justices of high courts to adjudicate over 4,000 criminal cases pending against sitting and former lawmakers, the Telangana high court directed the CBI special court handling Jagan’s (disproportionate assets cases to complete its work at the earliest. Reddy was charged as a prime accused in several cases relating to assets disproportionate to his known sources of income and money laundering by the CBI and the Enforcement Directorate.

The CBI had in 2012 filed charges against Reddy, accusing him of amassing more than Rs 1 lakh crore of wealth by misusing the office of his late father, Y.S. Rajasekhara Reddy, who was then the CM of undivided AP.

Reddy was arrested in May 2012 and released on bail 16 months later. Jagan fought two general elections in 2014 and 2019 when he was out on bail.

Andhra Pradesh Congress Committee (APCC) legal cell spokesman V. Gurnadham said the manner in which the Reddy government is headed for a collision with courts and judiciary is unprecedented in the history of Andhra Pradesh. #KhabarLive #hydnews