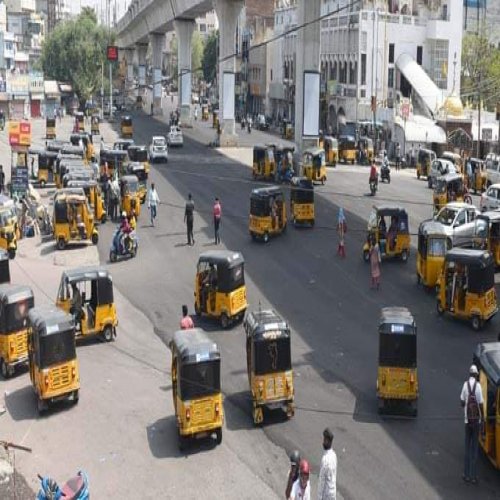 Post Lockdown, Hyderabad slowly regaining its momentum, auto-rickshaws are back on the city roads and trying to make up for the income lost during the lockdown since March last week.

Seeking to make the most of the absence of public transport, both RTC city buses and Metro services, the auto drivers have started to charge higher fares and are hardly using the meter. Though as per government rules in view of the pandemic, only two passengers are allowed in an auto-rickshaw, most can be seen allowing more. However, some drivers are also seen following precautionary measures including insisting passengers to wear masks and sanitising vehicles after each trip.

“With no intercity bus services, we have only two options, autos and cabs. Many opt for autos and during this pandemic, they are demanding double the rates without using the meter,” lamented Anita who was charged Rs 100 from Secunderabad to Chikkadpally.

Mahesh, an auto-rickshaw driver from Chilkalguda denied that they were fleecing the passengers though he agreed that many were not following the meter fare. “On average, we earn about Rs 600. Of this, after paying the share of the vehicle owner, we are left with only Rs 200. How can we survive with such income? We have to run our families and pay rents too,” he said.

Auto drivers said though they were prepared to make more trips and earn more instead of charging high, there were not many passengers. “Due to the closure of schools, colleges and shopping malls, the number of passengers is less now. Also, with the rule of only two passengers, those who would come out in groups are staying home,” he said.

ALSO READ:  How Useful Are 'Dating App' In This Pandemic?

Some auto wallas are trying to earn maximum with the few trips they could make before 9 pm. “I could make only one trip since morning, from Balanagar to Erragadda. Since then I am hanging around at Secunderabad in search of passengers. If the Rathifile Bus Station is opened and buses are allowed, we will have more passengers,” said Paramesh, an auto-rickshaw driver who had stopped for a meal at the Annapurna Center near Keyes High School.

Most auto drivers are keeping sanitisers in the vehicles for self-use and also for customers. “I request the passengers to sanitise hands and keep physical distance while traveling. Once the trip ends, I make it a point to clean the iron rods and other places, where the passengers touch or hold,” said Ramu at SD Road.

Auto services like Ola are also being preferred by some passengers. “Instead of bargaining with the auto drivers on the streets for a reasonable rate, we are opting for services like Ola,” said Kanna, a private employee.

In some cases, autos operating on a sharing basis are violating the two passenger rules and allowing more. The auto-rickshaw drivers say they are struggling to make ends meet.

“I am the sole breadwinner of the family. There is no money to buy groceries too. Most of us did not even get the benefits from the government including the Rs 1,500 and ration rice. I request the government to help us,” said Shabbir Khan, a driver near Alpha Hotel in Secunderabad.

Soumya Raha, a university student who came to the Secunderabad Railway Station to board a train said, “We are ready to pay if the rates are reasonable. Some additional amount is ok, but not exorbitant rates.” #KhabarLive #hydnews