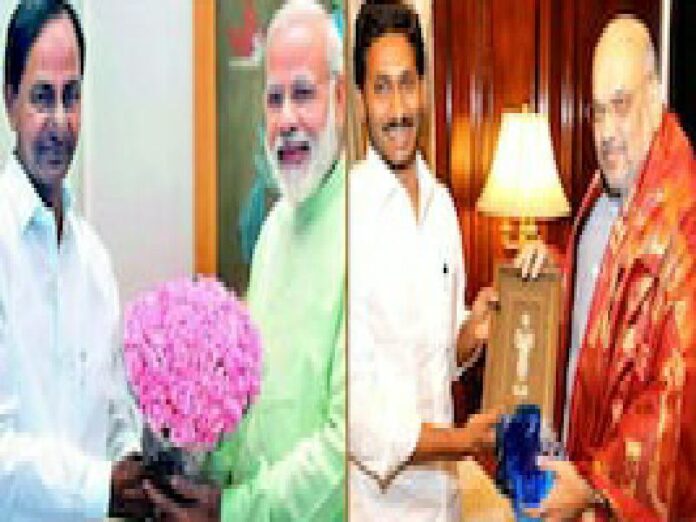 Telangana Chief Minister K Chandrashekar Rao arrived in Delhi on a three-day visit on December 10. He met Prime Minister Narendra Modi, Home Minister Amit Shah and other Union ministers during the visit. Close on the heels of KCR’s visit was Andhra Pradesh CM Jaganmohan Reddy’s visit. Reddy met only Shah before heading back to his state.

Both visits, it is believed, were wangled by the powers that be in Delhi for reasons best known to them.

Neither KCR nor Reddy have spelt out what transpired in the meetings.

The representations submitted to the Centre by the Chief Ministers on issues pertinent to their respective states were ‘revealed’ as ‘unofficial information’. Mundane issues and demands such as seeking flood relief, release of states’ share in the Goods and Services Tax (GST) and other such issues were listed as topics that were discussed.

This has fuelled curiosity over what is it that the parties concerned are trying to hide. KCR has adopted this strategy of leaving everyone guessing on what has transpired between him and the top national leaders for several years. Ever since he became the Chief Minister, even Jaganmohan Reddy has begun to copy-paste the same strategy so that he would not ruffle the feathers of anybody.

KCR, on his part, has kept the exact details of his meetings with the central leadership secret for several years. Ever since he became CM, even Jaganmohan Reddy has followed the same path.

The ease with which the two have been getting the appointments also makes one curious because when Telugu Desam Party (TDP) supremo N Chandrababu Naidu was the Chief Minister of Andhra Pradesh, he had made 26 visits to Delhi and yet failed to secure an audience with the Prime Minister. Naidu used to cry hoarse about it in press conferences and public meetings. Naidu even publicly admitted that he was humiliated by the PMO.

On the contrary, KCR got the appointments reported on his terms and even at short notices. This, despite the fact that the BJP has been fierce in its attacks on Telangana Rashtra Samithi (TRS), KCR and TRS working president KT Rama Rao. The TRS too has returned BJP’s attacks with full fury and fire. The recently concluded Greater Hyderabad Municipal Corporation elections saw the two parties go after one another all guns blazing.

Soon after the GHMC elections, where the BJP’s stock indeed soared and the TRS stock plummeted, KTR said his party would look inwards and introspect. KCR, meanwhile, went to Delhi and stayed on for three days. Even the photographs of his meetings with the PM and Home Minister made news.

Even as KCR had returned to Hyderabad, the Telangana state BJP unit’s president Bandi Sanjay Kumar was summoned to Delhi. He obviously poured scorn on KCR and said the latter would be sent to prison owing to “large-scale corruption”, but all that could be brushed aside just as political posturing.

Jagan, on the other hand, air-dashed to Delhi to ‘meet’ the Home Minister almost impromptu.

The larger context of the visits could be seen in the light of the fact that ever since Narendra Modi became the Prime Minister, political alliances and equations have become unpredictable. Even as BJP has become estranged from old allies, it has come together with parties that have no ideological similarity. So, it wouldn’t be surprising if the BJP is trying a truck with TRS and YRS Congress separately.

The meetings also come at a time when the Centre has been caught amid the Farm Law protests.

The Centre, which could plough the Bills through the Parliament and secure the Presidential assent, however, is forced to work overtime to drum up support for the laws outside Parliament.

The TRS openly opposed the Bills in both Houses of Parliament and participated in a recent Bharat Bandh.

Even Reddy’s YSR Congress supported the bandh. For, the YSRC endorsed the Farm Bills in both Houses of the Parliament and made a volte face on the eve of the bandh.

The BJP, it seems, is thus trying to win over pliable allies and the meetings could be an attempt at winning over the two parties. Surely, BJP would have made offers to both states (read both CMs) that they have found too tempting to refuse. KCR, who had participated in Bharat Bandh, intriguingly avoided meeting the agitating farmers during his Delhi visit. Upon arrival from Delhi, the Chief Ministers have not uttered a word about the farm laws or the ongoing agitation.

It is difficult to guess at this point what was part of the bargain and who gained what.

With Shiv Sena, Akali Dal and TDP gone from NDA, new entrants could well be prepping to fill in. #KhabarLive #hydnews