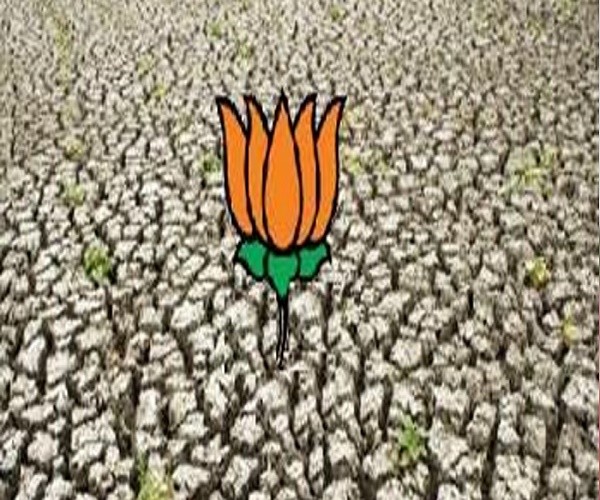 Soon after 2014 General Elections in which BJP created a history by winning a clear majority in Lok Sabha after a gap of three decades, we were constantly bombarded with news and views on how the saffron party was burning midnight oil to capture power in South of Vindyas, an unchartered political territory for it. Barring one-time power in Karnataka in 2008, BJP never gained foothold in South India.

So, the talk of BJP focusing on South gained prominence after 2014. As the saffron party played key role along with Congress in the creation of Telangana, there were ample indications that it would focus on the new State as well.

From time to time, BJP also made grand announcements about its grand strategies to gain traction in TS. But as Telangana heads for early Assembly polls soon and Lok Sabha polls as scheduled for May 2019, it is crystal clear that the saffron party has not made much headway in the State though its leaders claim otherwise.

A day after BJP president Amit Shah addressed a massive public meeting in Mahabubnagar town on September 15, I travelled across a large part of old Mahabubnagar district which has since been carved into three districts – Mahabubnagar, Gadwal and Wanaparthy. There have been indications in recent years that saffron party has zeroed in on a few MP seats in Telangana and Mahabubnagar tops the list. Perhaps that is the reason why it has chosen to sound poll bugle in Palamoor.

Going by images in the media, it was an impressive gathering when we take BJP’s current position in Telangana into consideration. But no traces of BJP’s presence were visible in the district just a day after its maiden election meeting. As I observed, TRS and Congress are the main rivals in most of the Assembly segments. At the most, BJP may spoil the Congress’ party in one or two Assembly segments. That is also doubtful now as voters have become smart these days and may opt for winning horses instead of wasting their votes on fringe players. The situation is not any different in other parts of the state.

Nevertheless, BJP’s and Prime Minister Narendra Modi’s attitude vis-a-vis Telangana Rashtra Samiti and its supremo Kalvakuntla Chandrashekar Rao in the past few months indicates an important political signal. Telangana has just 18 Lok Sabha seats and one of them (Hyderabad) has unofficially been reserved for MIM. That leaves just 17 seats.

TRS won 12 seats in 2014 when Telangana sentiment was at its peak. Subsequently, it was able to attract three more (one each from TDP, Congress and YSRCP), taking its tally in the lower house to 15. It’s highly unlikely that pink party will win all the 17 seats in 2019. Even if it does, the seats constitute just 3.1 per cent of total 543 MP seats.

Then why is PM Modi walking an extra mile to please TRS supremo. KCR was able to meet Modi thrice in past couple of months and could get Centre’s nod for new zonal system in a jiffy. Going by the jet-speed with which Election Commission is preparing for early polls, KCR’s decision to dissolve Assembly seems to have the blessing of the Centre.

These are clear signals that BJP has realised that it has lost most of the political ground it gained in 2014 and will therefore desperately need even small political parties like TRS to keep its power boat steady in 2019. BJP despite notching up a historic win in 2014 nationwide did not do much to gain a meaningful foothold in Telangana. It never chalked out a right strategy.

If it was serious about that, it would first have changed the Governor and brought in someone close to it, thereby boosting morale of its cadre here. But BJP chose not to do that. It’s now too late to implement any political strategy to strengthen the party. As the party has lost the political momentum it gained in 2014, it is very unlikely that it will get another shot at consolidating political base in Telangana in a decade or so. Therefore, it has no option except being friends with TRS.

That way, it has two advantages. Telangana is one of the few states where its arch rival Congress is a strong force. As BJP is not strong here, it’s firing at Congress from TRS shoulders. A defeat in Telangana will considerably weaken Congress at national level. A TRS victory means BJP will have more MPs in its kitty – official or unofficial. However, there is no need for BJP to prostrate before TRS to achieve this goal.

As Congress is the main rival for TRS in Telangana, the pink party has no other option except sailing with BJP at the national level. Though TRS chief tried to cobble up a third front, the reality is that there will never be a non-BJP government at Centre without Congress support. So, KCR’s Third Front will remain a pipe dream, but will be useful whenever he wants to drum up his secular credentials.

However, KCR is playing a dangerous game these days by simultaneously sailing in the boats of MIM and BJP, two diametrically-opposite parties. Given the high popularity he currently enjoys in the State and thanks to a weaker Opposition, there is no immediate threat to his position. Furthermore, as a conversation with a Muslim voter in Jadcherla town of Mahabubnagar district reveals, many from Muslim community believe that KCR is maintaining close contact with Prime Minister Modi to get things done for Telangana. “BJP is in power at Centre. KCR must keep the Prime Minister in good humour to get funds and clearances. Otherwise, why will Prime Minister help Telangana?” the small-time vendor reasons. For him, the Prime Minister is in KCR’s trap, not the other way around.

This perception will do more harm to BJP than TRS. We shouldn’t be surprised if BJP, which won five MLA seats last time, will be reduced to single digit in the upcoming Assembly polls. Therefore, it’s curtains on BJP in Telangana. The saffron party will never take roots in the newly-created State. At the most, it will remain a fringe player. And as there is not much opposition from public to KCR’s overtures to BJP, he may spring a surprise and join the NDA government at the Centre in 2019.

That will not only help him in elevating his son KTR as Chief Minister, but also pave way for the coronation of his daughter Kavita as a Union Minister. Two birds at one shot for KCR, the maverick! For BJP, it has always been a wrong shot in this part of the country!#KhabarLive