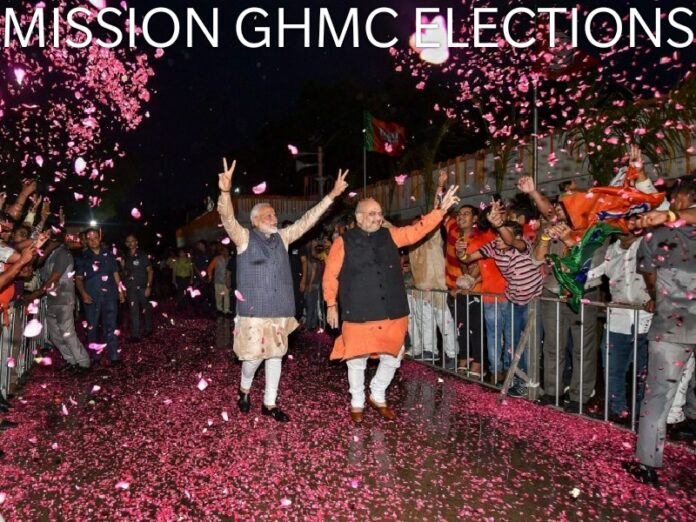 TRS supremo K Chandrasekhar Rao (KCR), who has enjoyed an unchecked run thus far, appears all set to taste a bitter pill with the BJP poised to upset his applecart in the GHMC polls.

The BJP has launched a no-holds-barred attack on the TRS for its inefficiency in tackling the floods and widespread corruption. Going by the way he has targeted the BJP in a meeting at the LB Stadium, it seems KCR has accepted defeat even before the votes are cast.

In his speech, he never spoke against the Congress but lashed out at the BJP stating that the latter had brought a horde of national leaders and that he was being targeted by the saffron brigade. With his utterances, KCR virtually agreed that the BJP is the main opposition and the party’s success in the GHMC polls is a foregone conclusion.

The recently concluded Bihar elections proved that people from Kashmir to Kanyakumari have accepted the leadership of Prime Minister Narendra Modi, thanks to his good governance and the BJP’s ideology. The secret behind the BJP winning election after election is the fact that the fruits of governance are reaching the people. The opposition has lost the trust of the people while the Prime Minister has won their confidence with his development work.

KCR consolidated his position after Congress leaders failed to fight for the Telangana cause and continued to fight for power till the last minute. After bifurcation, the Congress has failed to keep its flock intact. KCR managed to lure scores of Congress MLAs and weaken the grand old party, thereby denting its prospects beyond repair.

KCR has so far been enjoying an unchecked run at power and there was no one questioning him. There are whispers that he has made money from construction of irrigation projects and it’s an open knowledge that he has been keeping aloof from the people by confining himself to his farmhouse.

He has been acting like a dictator, trampling those who raise his voice against his anti-people policies and has even put curbs on the media.

KCR, with tacit understanding with the AIMIM, has been indulging in anarchic rule. His government has failed to come to the rescue of people whose houses were submerged. Normal life came to a standstill due to heavy rains that inundated the low-lying areas. The Chief Minister, who pays visits to console the bereaved families of leaders and film personalities, did not meet the people in flood-affected areas who were waiting for government help.

ALSO READ:  Experts Opined As The 'Electoral Bonds' Are Sheer 'Threat To Democracy'

When scores of people died due to the Coronavirus pandemic due to lack of amenities at the Osmania and Gandhi hospitals, he failed to respond. KCR, who had come to power stating that he would give one lakh jobs, miserably failed to fulfil the promise. The leader who claims that his government is providing graft-free, people –friendly governance and maintaining law and order, should take back his statement as crime is on the rise across the State.

The Chief Minister should release a white paper on development during his six-year rule. KCR, who attributed his party’s victory in the previous GHMC polls to himself and KT Rama Rao, should realise why citizens now prefer the BJP over the TRS.

People voted for the TRS in previous polls assuming that KTR would transform Hyderabad into a global city but their hopes were dashed as it is dotted with potholes, overflowing sewage and frequent traffic snarls. Lack of basic amenities is the order of the day.

In a heart-rending incident, a woman who came to apply for compensation to the people residing in flood-hit areas breathed her last at a Mee Seva. In this backdrop, the BJP is being seen as an oasis in the desert as the people are waiting for an alternative, which they can rely upon for good governance and corruption-free administration.

Not only people of Hyderabad, but also the entire Telangana is waiting for a right opportunity to teach a befitting lesson to the government.

KCR in his speech stated that the people should live in harmony like flowers in a bouquet, but people across the country have been living peacefully, irrespective of caste, creed or religion. Thirty percent Muslims in Lucknow, Meerut and Bhopal, 14 percent in Bengaluru and 22 percent in Mumbai are living in peace. Leaders who chanted secularism have been rejected by the people and KCR too will join their bandwagon soon. #KhabarLive #hydnews