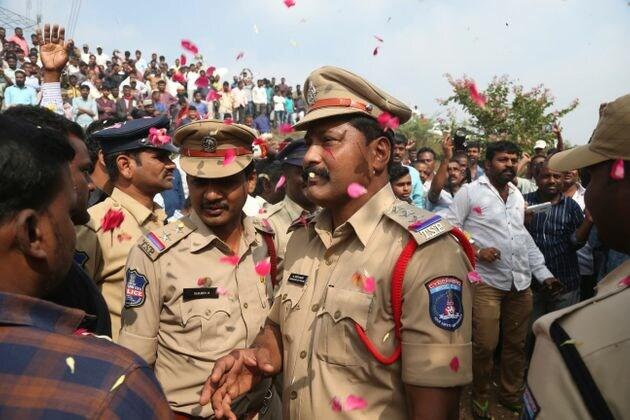 Sociologists warn against reading the reaction to the encounter killing of the four rape accused men as a ‘universal acceptance of extrajudicial killings’, but irresponsible media coverage and bloodthirsty public figures are making the situation worse.

In 2012, the Delhi gang-rape case led to a nation-wide debate on death penalty for rapists, and a change in India’s laws. Despite opposition from rights activists, feminists and even the Justice Verma committee that the death penalty would not be a deterrent to rapists, it was included as a punishment for the crime in certain cases.

In 2019, it seems like we have moved on to debating the morality—not so much the legality—of killing those accused in rape cases through encounters. Not even convicts.

The bloodlust is high. The details matter less and less. Or so it seems after news emerged of the Telangana police shooting dead on Friday the four men accused of raping and murdering a 27-year-old veterinarian.

Then why does it seem like we are collectively baying for blood, at least on TV screens and in WhatsApp groups?

After the first reports of the Hyderabad encounter began flashing on TV screens early on Friday morning, a large number of politicians, celebrities, police officials and at least one Union minister began lauding the action. The exact details of what happened had not yet emerged when these comments were being made.

#Justiceserved and #JusticeforDisha trended on Twitter. The death of the accused was the main news story all day, with ’Hyderabad encounter’ one of the top search terms on Google India trends with over a million searches roughly 12 hours post the encounter.

Far from just shock, the predominant sentiment on public display seemed to be of celebration.

Over 2,000 people gathered near the spot of the encounter. Police officials were showered with flower petals, with some hoisted onto the shoulders of people in the crowd. Men chanted praise of the police.

Just a few days ago, the police had come under criticism for allegedly not taking the woman’s family seriously when they tried to report she was missing. They also issued a long advisory putting the responsibility of keeping themselves safe on women.

Crackers were burst outside the home of the young woman, and her neighbours and strangers spoke of their happiness at “justice” being delivered.

While the police have maintained that they shot the men dead because they tried to attack policemen, one of the news reports widely shared after the incident was a 30 November that quoted “well-informed sources” as saying that the arrest was just one of the options the police discussed.

#KhabarLive mentioned here on how at least three infamous encounters in Telangana and Andhra Pradesh were conducted after massive protests demanding ‘justice’.

While the Telangana case seemed to evoke anger and outrage similar to the 2012 Delhi gang-rape case, Kannabiran cautions against comparing the two cases and their aftermath.

“In 2012, the anger was over the incident. The accused hadn’t been “bumped off”—so the situations are not comparable. There was anger here too in the first week. But now the CP (Cyberabad Commissioner V.C. Sajjanar) has deflected all attention onto himself,” she said.

News channels have also been breathlessly following the case, often amplifying dangerous and uninformed sentiments in their race for TRPs and to portray that the “public” supports the encounter.

The lack of interest in the media about crimes away from regular beats and metropolitan areas has a direct impact on our understanding of the extent of violence against women, especially poor and marginalised women, and the reasons for it. In fact, in the week before and after the Hyderabad rape, several such horrific incidents were reported from different parts of the country. But only one was pursued by the media.

In the Parliament, during a discussion on the issue, MPs called for extreme measures—while Samajwadi Party’s Rajya Sabha MP Jaya Bachchan called for a public lynching, AIADMK’s Vijila Sathyananth called for the accused to be hanged before December 31 while DMK’s P Wilson wanted rape convicts castrated before they were released from jails.

None of these comments were censured by the Lok Sabha speaker and the Rajya Sabha chairperson, or by the chiefs of the respective political parties.

Bachchan’s comments did not just make news, she was given the space and airtime to repeatedly justify it. Instead of outrightly condemning a lawmaker’s bloodthirsty statement, news channels debated whether this was a validation of public anger.

In a now-deleted tweet, Times Now ran a poll saying — “Time for ‘debate’ is over, India says ‘lynch rapists.’ Do you endorse the demand?”

It encouraged viewers to phone in with their views, giving airtime to people who claimed castration or death was the only fit punishment for rapists.

Immediately after, the Home ministry recommended rejecting the mercy petition of one of the convicts in the 2012 rape and murder case.

The Lok Sabha could not even manage to hold a discussion on the encounter for lawmakers to raise questions about how it was conducted.

BJP MP Meenakshi Lekhi said the law had been followed and added, “The police have not been given weapons as a showpiece.”

News channels called the encounter a “dramatic twist” in the case, relentlessly flashing emotional comments from the family of the Telangana vet and mother of the 2012 rape victim that this was, indeed, “justice”.

Contrast this with what T. Pranitha, the sole survivor of the 2008 acid attack case, whose perpetrators were killed in the infamous Warangal encounter, had to say, 11 years later: “I think there’s no justice in that kind of action. Justice will be done when my face comes back to normal, when my skin is normal and I get to lead a normal life. That will be called justice. Though they are killed, I am still facing the aftermath of the incident,” she told #KhabarLive.

In her column, Kalpana Sharma asks, “Given our dysfunctional criminal justice system, is it not incumbent on the media to err on the side of caution, rather than encourage, and even join, the lynch mobs? Is it not the duty of the media to aid justice rather than perpetuate injustice?”

Current and ex-police chiefs commented that this was par for course.

“Although it’s totally unprofessional, but I think this was what was expected. I knew something like this was going to happen,” former Andhra Pradesh DGP Swaranjit Sen said.

Bengaluru Police Commissioner Bhaskar Rao said, “The action of Hyderabad/Cyberabad police was correct and timely, there can be no second opinion. If they (accused) had escaped from the custody, they (police) would have been under tremendous pressure. The incident has happened during inquiry and it needs to be defended. Cyberabad police has taken required action.”

Former Delhi Police commissioner Neeraj Kumar told that he had a “tough time” during the December 2012 gang-rape case.

“We were getting messages, asking us to throw the accused in front of hungry lions. Someone said castrate them in public, someone said lynch them, but we just stuck to our guns. There was no question of doing anything illegal,” Kumar told.

But Kannabiran says, “The 2012 outcry led to a constructive effort to bring a new, more stringent law in place. This incident, despite a stringent law, is demonstration of the police’s utter disregard for law and judicial process. It is the worst manifestation of impunity we can imagine.” #KhabarLive