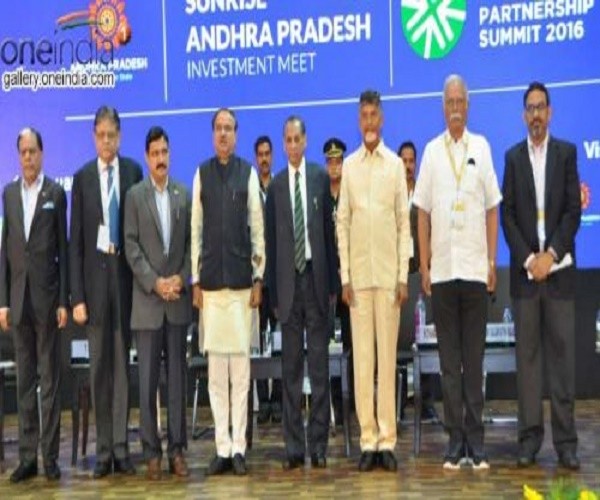 Recently in Visakhapatnam, the CII Partnership Summit and the Sunrise Andhra Pradesh Investment Meet were held recently. The Andhra Pradesh government, according to the information put out, signed Memoranda of Understanding (MoUs) worth Rs 4.39 lakh crore at that Summit. Chief Minister Chandrababu Naidu announced that his government had signed 734 MoUs with various companies and the investment is expected to create about 11 lakh jobs.

Unsurprisingly, the opposition parties of the state dismissed the entire event as a publicity stunt. There were similar announcements in 2016 and 17, they say, and ask what happened to them. This statement is used by local BJP leaders to ask, how the state government can say that investments are not forthcoming in the absence of special status when such huge investments are pouring in recent years.

They refer to the claims that investments to the tune of Rs 4.78 lakh crore were committed in 2016, apart from Rs 6.83 lakh crore in 2017, and Rs 439 lakh crore in the recent summit. The special status being asked for by the state has no bearing on investments, they point out, and TDP is unable to counter them.

When, in 2016, such as summit was first held, the state government claimed that Rs. 4.78 lakh crore of investment would come from 331 MoUs signed and generate employment for 10 lakh people. It also expressed the confidence that the Central government would establish many institutions in the state and that, as a result of the impact of the investments and the institutions, the GDP of the state would increase from 11% to 14-15%.

Before 2017 summit, Congress leader Nadendla Manohar alleged that Rs 40 crore spent on 2016 summit was a waste since less than 1% of promises materialised. Claiming that he obtained information via Right to Information, he said that a mere Rs 2,076 crore of investment came in and even that figure included Sri City and Vizag Pharma SEZs, he added. The 2017 Summit took place despite all this criticism.

The state government, however, experienced an embarrassing situation when in its Industries Secretary Solomon Arokiaraj declined to sign 91 of those MoUs on behalf of the government. He said he was neither involved in drafting nor in vetting of the MoUs. Prepared by a consulting agency, they lacked credibility and he would not take responsibility for the contents thereof. Dismayed, the state government then got the MoUs signed by the Director of Industries Karthikeya Mishra.

In 2018 the government contented itself with promises of investment of the order of Rs 4.39 lakh crore, a figure which was much smaller than the claims made in the previous years. Unwittingly, the state government strengthened the suspicion in regard to phony MoUs, by cancelling 306 signed in previous years. It announced that this time around, special care was taken to screen the proposed MoUs, and that non-serious parties had been weeded out. In other words, it has finally been admitted that a substantial number of the MoUs were only on paper. The question is why this is happening.

For one thing, industrialists are perhaps signing the MoUs for the sake of publicity without any genuine intention of operationalising them. Another reason could be a lack of response from the state government even when the signatories were keen to keep their word. In the first case, it is necessary to find out what the real intentions of the industries were, and what they hoped to gain by signing MoUs.

Was it with the intention of increasing the value of their shares in the stock market? If that is so, much more care has to be taken in the future to make the procedure foolproof. Perhaps, a penal clause for those backing out from MoU could be a good idea. Another method would perhaps be to blacklist the defaulters and drop them from the list of invitees for subsequent events.

In regard to the second case, it is necessary to enquire into the defects in the system that is in place within the government. Red tape would be the obvious whipping boy. But then, there is the claim that single window systems have been set up to improve the strike rate. If that is so, this method is apparently not working out. It does not matter what the government or the corporates hope to gain by this publicity exercise. The worrying part is that the jobless youth, whose expectations are raised by the fancy announcements who would be crestfallen and depressed when they do not translate into action. That, precisely, is what has to be averted at any cost.

What happens usually is that an investor first makes known his “intention” to invest by filing a Part 1 form with the Department of Industrial Policy and Promotion (DIPP) of the government of India (GoI) (in the case of large and medium scale industries) and with the State Industries Department (for small and micro enterprises). Once the intention is converted to an actual industry, an Part 2 from is filed. All intentions clearly do not get converted into actual investments and there is a time gap for intentions to translate into actual investments – 2-3 years for large and medium industries and 1-2 years for small and micro enterprises.

An analysis of Part 1 intentions data with Part 2 investment data with the appropriate time lag of 1-3 years yields the “strike rate” of conversion – of intentions into investments. Analysis of data put out by DIPP shows a long-term trend strike rate for large and medium industries between 12-20% and that of small and micro enterprises between 35-40%, showing how difficult the conversion is. Manufacturing sector projects create long term well-paying jobs whose payrolls provide a fivefold multiplier effect over the life of the Project. Large investments in non-manufacturing sectors have the least employment generation per million rupees invested. Thus, they have the least multiplier effect of the investment.’

Investment Summits and MoUs signed in them work – one, for the focus of attracting investments; and two, for the higher strike rate, and three, for attracting investments that may have gone to some other State in the normal course .But the time taken to convert intentions is about 3-4 years, so the frequency of the summit is important – once in two years is too small a gap. The real danger is that once Summit is over, the State may not get any investments in the natural course for the next few years as all potential investments are exhausted during the Summit MoU. So, unless the strike rate is good, the State may actually be a long-term loser.

The MoUs signed also give a wrong impression – in the anxiety to show figures, MoU values are boosted up. In addition, a few large value but really long term projects like refineries (HPCL, signed MoU three times), ports (VPT expansion, other minor ports), capital area development real estate (multiple MoUs with Singapore Government) and mineral based (alumina/bauxite) and projects which are still at the drawing board stage (metro rail, IT and Industrial parks) get added to pad up the final figure. These will take years to materialise. Job creating manufacturing sectors investments lose focus.

When involved in such an intense time-consuming event, the department loses complete interest in the SME sector, which produces the largest employment per million rupees invested. In fact, the SME sector needs more intensive hand-holding than the large industry, which, sadly, will not happen. What is needed is a dedicated team to follow up the MoUs signed and convert them to reality.

This team has also to be empowered to take decisions. For example, allocations of land, power, and water continue to be handled by traditional departments and the tardy clearance will slow down the convention rate a number of MoUs. Some genuine investors may simply lose interest when approvals are not given in time. Since government resources, especially IAS officers, are scarce, there is a tendency to hire private agency to monitor, and their failure to coordinate with middle level government officials increases the drop-out rate. #KhabarLive