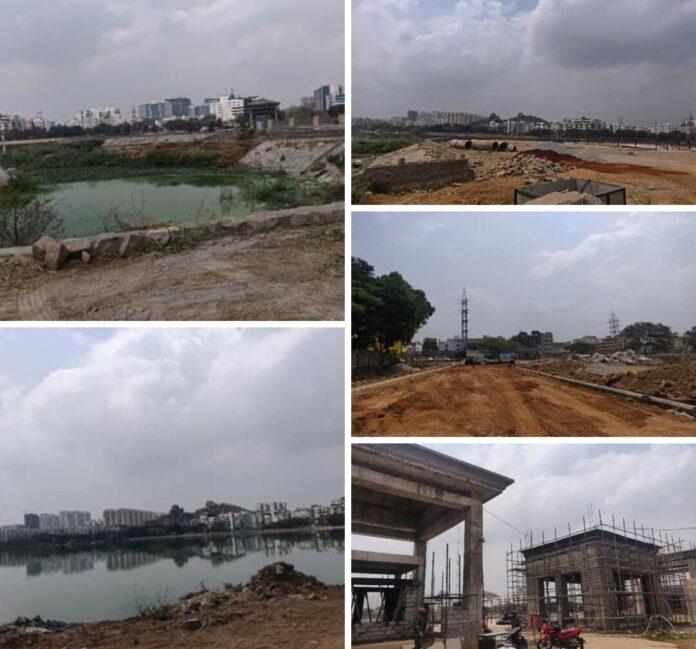 A ‘beautification drive’ of Malkam Cheruvu (lake) undertaken by the Greater Hyderabad Municipal Corporation (GHMC) in the Hyderabad’s Raidurgam area has become a point of controversy. Locals and environmental activists allege that the water body is being encroached under the guise of beautification.

Malkam Cheruvu, which was spread across 57 acres, was considered by the GHMC for beautification with Corporate Social Responsibility (CSR) funds of an infrastructure and housing company two years ago. Activists say that since then, the lake has shrunk in size, by over four acres.

Lubna Sarwath, Hyderabad-based environmentalist and former Convener of Save Our Urban Lakes (SOUL) also brought the matter to the notice of the High Court.

In a letter to Chief Justice RS Chauhan, Lubna alleged that the construction work has “seriously compromised” on the lake’s territory, thereby threatening its biodiversity. She demanded that the High Court intervene into the matter and save the lake from “annihilation”, by evicting all illegal constructions from the lake’s Full Tank Level (FTL).

Lubna alleged that the GHMC had laid a tar road and put up a fence inside the FTL of the lake. She alleged that the civic body had removed the old fencing that was put up at a cost of several crore rupees in 2016, and showed a new stone wall constructed inside the FTL, as the new boundary of the water body, to the High Court.

Speaking to #KhabarLive, she said, “If these constructions are not evicted, it will affect the flow of rain water into the lake, leading to destruction of the water body. Authorities of the GHMC and Hyderabad Metropolitan Development Authority (HMDA) must remove all structures including a huge gateway and pathways, besides an immersion pond that is inside the lake’s FTL.”

When #KhabarLive visited Malkam Cheruvu to assess the situation on the ground, final touches to the construction at the gateway and laying of a mud path (walking track) was taking place, while construction of a wall in the front was finished, and a fencing was placed. A petrol pump, which allegedly encroached the FTL, is also under operation.

According to supervising staff at the site, the ‘beautification’ work may get done in three to four months.

In the beginning of the beautification drive of the lake in 2018, several residents, along with Lubna, had approached the HC.

In its order, the court had “stayed the raising of any construction, especially with regard to large constructions which are carried out in the name of beautification of the lake.”

While the initial stay order was valid till January 4, 2019, the petitioners managed to extend it in April 2019, to ensure that it was in place until the pending case was disposed. However, the court made certain exemptions to the GHMC and other authorities to take necessary steps to preserve the lake.

Officials of the GHMC said that they had apprised the HC about the plan to restore the lake, and were moving forward only as per court orders.

When #KhabarLive reached out GHMC’s Irrigation department’s Assistant Executive Engineer (AEE) Nagaraju, he said that they are not compromising with any of the guidelines laid down by the court, and were taking measures to prevent encroachments.

“So far, we have removed seven structures which encroached into the FTL. A petrol pump is still in FTL limits. We have already issued notices. Due to certain security precautions, their relocation is taking time. Soon, we will remove that as well,” he said.

When asked about the allegations on construction of pathways, gateway and the walking track, the AEE said “We have informed the court about affected wetlands in the periphery of the lake. As per HC orders, we have not carried any fresh construction work. Wet land development is taking place to strengthen the lake, desiltation, landscaping and fencing was done, only to prevent any further encroachment.” #KhabarLive