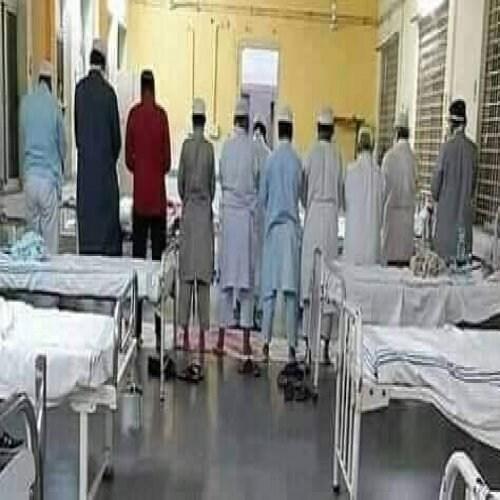 It has been a tumultuous month for Mirza (Name changed). A native of Tangellamudi at the outskirts of Eluru in West Godavari district of Andhra Pradesh, he and three others had set off for Delhi on March 6. “We stayed there for a few days and made arrangements for others from the state who were due to arrive later,” he said. What was to be a regular visit to a religious conference has however now turned into a massive controversy, as the meeting that Mirza and hundreds of others attended, has emerged as the epicentre of the COVID-19 spread in many parts of the country.

Mirza is the West Godavari District President of the Tablighi Jamaat, an international organisation which is now under the spotlight after scores of them – including many foreign nationals – who had participated in the weeks long conference in March, tested positive for COVID-19. Among them, six have died in Telangana, while one man from Karnataka’s Tumakuru is also dead.

Mirza himself has tested positive for coronavirus. “I returned from Delhi on March 17 with some others, and it has been 11 days since my return. I am showing no symptoms – but now they’re saying that I have tested positive. I don’t know how this has happened,” he tells #KhabarLive.

The Tablighi Jamaat meetings at the Nizamuddin Markaz Masjid happen throughout the year. The masjid organises Mashwara (sermons) for people from specific states on particular dates, as well as common meetings, which are open to followers from across the globe.

According to available data, so far almost 300 people who attended the Tablighi Jamaat event in Nizamuddin between March 8 and March 21, have tested positive for coronavirus. This includes 190 patients in Tamil Nadu; 24 in Delhi; over 50 patients in Andhra Pradesh; at least 15 in Telangana; 10 in Andaman and Nicobar islands; two in Puducherry; and five in Assam.

And considering the people who attended the meeting returned home in several waves – anywhere between March 11 and 24 – the state governments now have a massive challenge on their hands, as the incubation period for the virus is not over for many people.

A series of events in 14 days
Various participants of the conference at Nizamuddin tell #KhabarLive that a series of meetings were organised in the mosque between March 8 and March 21. Some of the earliest reports of the event were highlighted when a group of Indonesian nationals in Telangana tested positive for COVID-19 on March 17. They had reached Karimnagar town on March 14.

Soon, two citizens of Thailand tested positive for COVID-19 in Erode on March 21. They had also attended a meeting at the Nizamuddin mosque, and reached Erode by train on March 11.

Rahman (name changed), a 40-year-old man from Madurai district said that while the event that took place between March 8 and March 10 at the Masjid was a global one, which had international participants, the one which his group of nine people from Madurai district participated in was a state-specific event on March 20 and 22.

Around 1,500 persons from Tamil Nadu, and over 1,000 members each from Telangana and Andhra Pradesh are believed to have participated in the meeting in Nizamuddin. Karnataka and Kerala governments have said that around 1500 and 270 people from their states respectively were participants.

This also means that the virus incubation period differs for most of these people, and the contacts they came in touch with, making the job tough for all the states. Moreover, all of them have traveled by flight and train, and contact tracing scores of others who were co-passengers is not an easy task.

Meeting for the Telugu States,
#KhabarLive has learnt that the district heads and a few other members of Tablighi Jamaat from across Telangana and Andhra had travelled to Delhi at least a week in advance, to oversee arrangements for the members from their respective states. This includes Mirza.

Once the arrangements were in place, those in Telangana and northern Andhra with access to airports, left for Delhi on March 14, while those from the Rayalaseema region of Andhra left a day earlier on March 13.

A resident of Visakhapatnam who is an employee of Vizag Steel says he left home at 6.30 am on March 14 and reached Delhi the same night. “We stayed there for two days and I took an Air India flight back on March 17 at 3 pm, and landed at 5 pm. I walked through the thermal scanner without any issue and came home,” he says.

A resident of Old Check Post in Vijayawada says that he, too, travelled on March 14 and returned via Air India flight (AI 467) on March 17.

A local preacher from Ongole in Prakasam district, where a large number of cases have been reported, says, “People from Telangana and Andhra were lodged in the same hall, where there were also some rooms. We would eat and sleep together. The foreigners were in different rooms and we never came in direct contact with them.”

Another resident from Kadapa, which also saw a spike in the number of cases, says that he and a few others left for Delhi on March 13 after boarding a train from Tirupati. “We returned to Hyderabad by flight on March 17 and reached the airport at 5 pm. We were screened and they let us go. We caught a bus from Aramghar and came back to Kadapa,” he says.

“Earlier this week, authorities took us to the Rajiv Gandhi Institute of Medical Sciences (RIMS) in Ongole and we tested negative for the virus,” he adds.

All those whom #KhabarLive spoke to from Andhra Pradesh, say that they have not come in direct contact with the foreigners who attended the conference, and did not meet them during their stay in the building.

The meetings for those from Tamil Nadu got cut short due to the Janata Curfew announced by Prime Minister Narendra Modi on March 22, Sunday.

“We had booked train tickets back to Madurai on March 23. But due to curfew and the cancellation of trains, we got stuck there. We then booked a flight for March 24. However, we were asked to leave the mosque by March 23 and by evening we were at the airport. We spent a full day at the airport for our flight on March 24 evening,” Rahman says. While one contingent flew back to Chennai by an IndiGo flight, the remaining took a Spicejet flight out of Delhi on March 24.

However, not everybody who was at the Masjid participating in various meetings were able to get out immediately. Many stayed back since their trains had been cancelled, because of the subsequent 21-day lockdown imposed across the country to prevent the spread of coronavirus.

“The Masjid is like a pilgrimage centre. Anybody can come and stay for any number of days. While foreigners generally don’t attend the state meetings, many foreigners who come to visit the Masjid will be sent to visit a state along with a guide from the native state,” 48-year-old Zaheer (name changed) from Theni district, who attended the Tamil Nadu meeting explains to #KhabarLive.

He along with his friends reached Coimbatore from Delhi on March 24 and reached their homes in Theni district late the same night. They were all tracked by the district authorities and placed under home quarantine on March 25. #KhabarLive