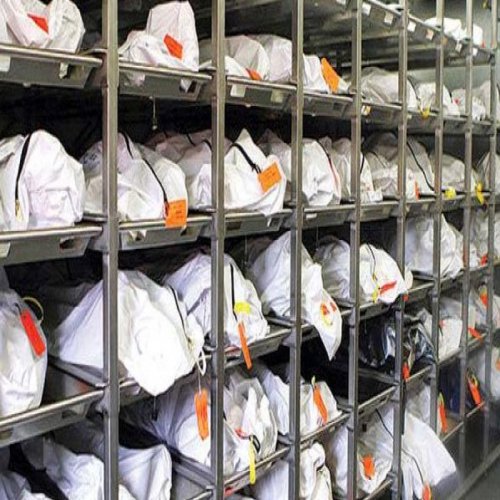 It’s a legal dodge, really: If death happens when test results are awaited, it’s not officially COVID-19. Doctors at Hyderabad’s Osmania General Hospital (OGH) have confirmed to #KhabarLive that the Telangana state government is indeed under-reporting COVID-19 deaths in the state, aided by a small lag in the testing process.

One senior doctor working at the premier state-run hospital, speaking to #KhabarLive on the condition of anonymity, said there were over 20 deaths in the isolation wards of the hospital, housing 100–120 patients, during the the 24-hour period straddling Monday and Tuesday. This, according to the doctor, has been the fatality rate among COVID-19 suspects over the past few days.

The Osmania hospital has about 10 wards where patients suspected of being COVID-19 positive are isolated until their test results are received. The word ‘suspect’ is key in understanding how the numbers are kept low. OGH admits patients who present moderate-to-severe symptoms but have not yet had a COVID-19 test done. If a patient tests positive for COVID-19, he is sent to Gandhi Hospital, a designated COVID-19 facility. Until the test result comes in, suspect patients stay in isolation. The process can take more than two days.

The doctor who spoke to #KhabarLive said several of the deaths happened before their test results were received. “Of the over 20 deaths earlier this week, only a few of them had received their COVID-19 test result and it was too late to transport them to Gandhi Hospital,” he said. “I am sure the rest of them were also infected; they had all the symptoms. But then we cannot send them to Gandhi Hospital without a test result.”

Shifting the infected patients to Gandhi Hospital is a time-consuming process and can take hours. Also, shifting deceased patients to the mortuary also gets delayed in most cases. A few days ago, a patient referred to OGH by a senior police officer died in the morning but the body was not moved until afternoon. “This is how a VIP case was handled. If it were an ordinary citizen, the body would not have been moved for 9–10 hours,” said the doctor.

OGH currently has a shortage of doctors because several of them have tested positive and had to be isolated. To manage the shortage, doctors are divided into ‘units’, each of which is given isolation duty about once a week. On a typical day, there are two junior doctors monitoring the patients, assisted by a handful of interns and nurses. At night, there is usually just one junior doctor, three or four interns and nurses to look after as many as 100 patients. Doctors in several of these units have tested positive, forcing them to remain off duty.

Some of the patients in the isolation wards disregard the doctors’ instructions and and move in and out of the rooms. “We keep telling them to stay in the same room or ward. Ideally, there should be a security guard posted outside the wards to ensure compliance. As doctors, we cannot force someone to stay in their bed. We are too few in number to intimidate them,” said the doctor.

One junior doctor who tested positive and then recovered said OGH is unable to help many of the ‘suspect’ patients it gets every day. The Fever Hospital at Nallakunta, which takes in suspects with only mild symptoms, often diverts patients to OGH if their blood oxygen saturation levels are even a bit lower than 95 per cent.

The number of deaths among COVID-19 suspects admitted to OGH can be attributed to the fact that unless the condition of a person gets worse and symptoms get stronger, he or she cannot be admitted. And once admitted, the patient has to wait for a test, and then the results. This consumes precious time that could otherwise be used to save their lives. “In theory, if a suspected case hasn’t tested positive yet, he has to wait until his condition gets worse for OGH to give him a bed,” said the doctor.

Doctors say it is a Catch-22 situation at OGH. If you have a positive test result, you can get admitted straight to Gandhi Hospital or the Telangana Institute of Medical Sciences (TIMS) at Gachi Bowli. In case you show all the symptoms, you have to get admitted into an isolation ward and stay there until you get a positive result.

“However, the stay of suspected patients in isolation is very unsafe. Even if the patient does not have COVID-19 but exhibits symptoms mimicking the disease, he might contract the virus while in isolation. Ironically, you are lucky if you have tested for COVID-19 early with mild symptoms. You can them directly go to TIMS or Gandhi. You will not have to wait for many days in isolation wards at OGH,” a doctor remarked. #KhabarLive #hydnews