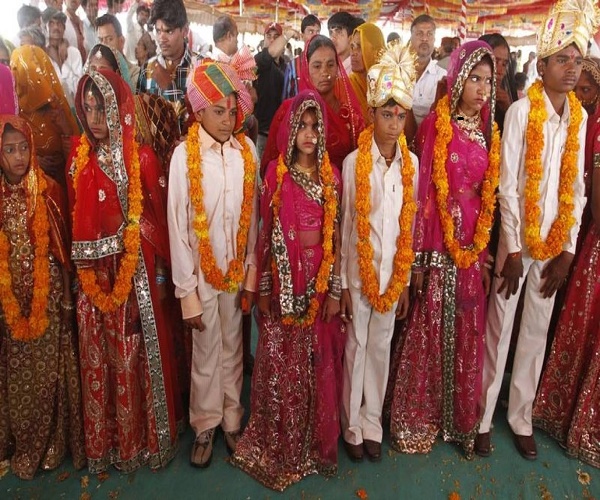 59 / 100
Powered by Rank Math SEO
The pandemic has caused a lot of unexpected damage to various aspects of human life. According to a UN report published in April, the Covid-19 pandemic could lead to an extra 13 million child marriages over the next decade. Other estimates suggest that four million girls are at risk of child marriage in the next two years.
Studies have documented an increase in gendered violence during natural disasters and pandemics. Child marriages can also be considered as a form of gendered violence, affecting girls’ health, education, and career options.
After the 2004 tsunami, girls were forced to marry tsunami widowers. There was an increase in school dropouts among girls, gendered violence, and child marriages after the Ebola crisis. The same was seen after the Nepal earthquake in 2015 and in Bangladesh and Syria.
During Covid-19 an increase in gendered violence and child marriages has been seen in countries including Yemen, Somalia, Colombia, and India.
Many women in India get married before they turn 18. According to the 2016 National Family Health Survey, some 27% of women aged 20–24 years were married before they turned 18.
Although the proportion was recorded to be much higher at 47% in 2005-06, India still is home to the largest number of child brides in the world – one-third of the global total according to UNICEF.
The risk of being married as a child depends upon your place of residence, and family’s wealth and education. In 13 states, more than 80% of child marriages took place in rural areas. Rural girls belonging to the poorest quintile with little or no education are at higher risk. The risk decreases with an increase in family education and income.
As opposed to a national average of 27% child marriages, states like Bihar (42.5%), West Bengal (41.6%), Jharkhand (37.9%), Rajasthan (35.4%), Tripura (33.1%), Andhra Pradesh (33%), Madhya Pradesh (32.4%) and Assam (30.8%) have a higher percentage of child marriages. Almost all these states are poorer than the national average.
According to studies the factors which lead to child marriages include: poverty in the family, avoiding expenditure on female education, minimizing marriage expenditure, avoiding sharing out the ancestral property, and social insecurity.
During a pandemic, factors like poverty and education are more likely to play a greater role in increasing child marriages. The economic strains many families go through in such times may lead them to adopt negative coping mechanisms like child marriages.
Finally, schools protect girls from marriages. When schools are closed, in many cases it leads to a permanent dropping out, which then raises the pressure of marriage on girls.
During Covid-19, many states in India have seen a rise in attempts for child marriages. The lockdown in India has laid out restrictions on gatherings like marriages. This reduces the cost of getting married during the lockdown, which incentivises the economically burdened, as they can perform marriages at a lower cost.
In many cases, government authorities and NGOs have been able to stop these marriages, but the number of unrecorded marriages may be high.
Childline India has witnessed an increase of 50% in calls for protection from abuse, violence, and child marriages in India during the current pandemic.
“In the past 3 months, CHILDLINE India received 5,584 calls reporting child marriage. Tamil Nadu, Karnataka, West Bengal, Andhra Pradesh, and Telangana are the top 5 States to have reported child marriages during these first 3 months. Karnataka alone accounts for nearly 29 percent of interventions for child marriage,” a news agency reported.
Girls in West Bengal are highly vulnerable to child marriages due to the double disasters of COVID and Amphan. Over 500 cases of child marriages were reported in West Bengal between mid-March and May.
Child marriage violates girls’ human rights, robs them of their childhood, and has adverse effects on their health as well as the health of the children born to them. If this surge is not taken seriously, it will undo decades of efforts to end this practice.
Efforts of NGOs, village and district officials should be coordinated in identifying and rescuing the victims. Community leaders and religious leaders can play an important role in influencing parents’ decisions, and they should be encouraged to motivate parents not to marry their daughters at an early age.
Governments should support continued school education. This will reduce the dropout percentage and protect girls from being married at an early age.
School education can be continued online and through television or radio broadcasts. Everyone’s access to such education should be ensured. The provision of midday meals through dry rations or by depositing money into bank accounts during the lockdown will reduce the economic burden on families considering child marriage.
Governments and businesses should also fund civil society organizations as required and must increase awareness about helplines through advertisements and other channels. #KhabarLive #hydnews
ALSO READ:  Why Do Men Treat Women Like 'Slaves'?