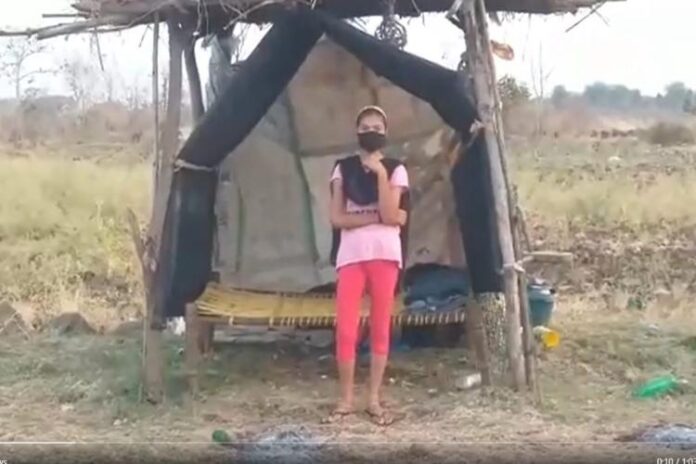 In an inhuman situation, a tribal girl spent two weeks isolating herself in a make-shift tent in her family’s jowar field in Telangana region.

For 13 days, an intermediate student in Telangana’s Adilabad district was allegedly forced to isolate herself in a make-shift tent after she tested positive for the novel coronavirus. It is alleged that the residents of Saleguda village had denied entry to the girl, owing to the stigma around the disease.

Videos showed the student standing out in her family’s jowar field, where a make-shift tent was set up with a cot. Another video shows her father giving her company, as he sat on a bed meters apart from her, ensuring physical distancing.

The Minister had tweeted, “It is inhumane to boycott COVID-19 patients. To fight against the disease we need to cooperate with each other and go forward. The incident of outcasting the girl who tested positive for COVID-19 is unfortunate. I instruct the Telangana DGP and Adilabad SP to immediately take appropriate action.”

According to reports, the girl, a student of Telangana Tribal Welfare Residential College at Mudhole in Nirmal district, returned to Saleguda village on March 19 after testing positive for coronavirus. It is being alleged that she was, however, denied entry into the village, fearing that she might infect others.

However, the officials who visited the village, say that the girl observed the isolation voluntarily without any coercion from the villagers. Officials who conducted the second test on Tuesday found that the student had tested negative. Subsequently, she was persuaded to go home.

Indravelli Medical Officer Dr Shyam Sundar said, “The girl is observing self-isolation voluntarily. She has now tested negative. She is fine. We have counselled her to come to the village, but she is insisting that she will stay in the field for four more days to be certain so as to not cause trouble to anyone.”

Denying the allegations that the villagers had boycotted the girl, the Medical Officer said, “The villagers have been cooperative. They have been supplying water and food items to her. There is a mutual understanding between them.”

Even as COVID-19 cases see a surge across India, Telangana is yet to reinstall isolation centres that were earlier set up in schools and colleges.

Adilabad District Medical Health Officer Dr Manohar said that it is for the government to review the crisis and suggest actions. #KhabarLive #hydnews