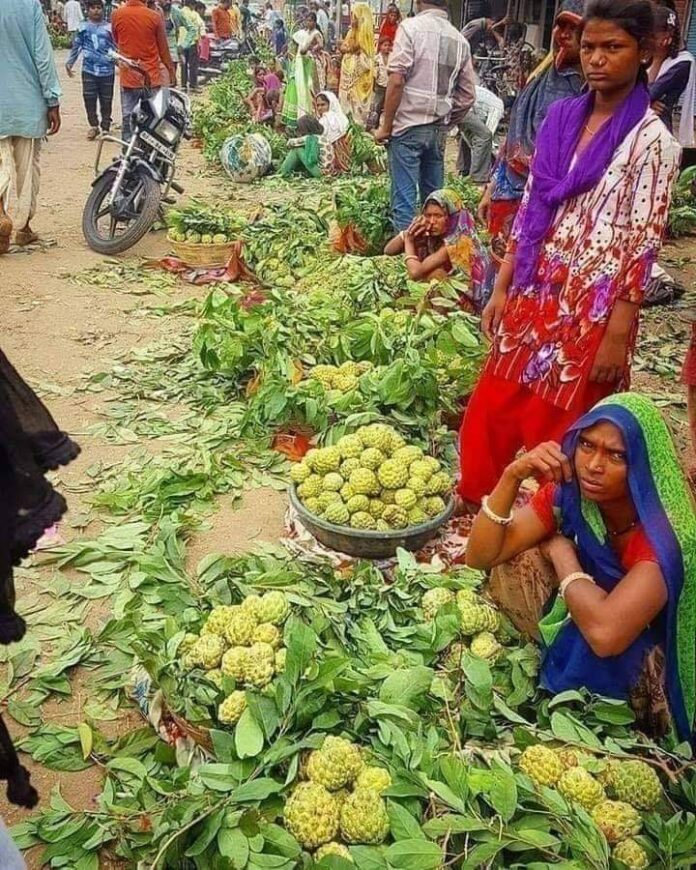 Hyderabadis delighted as custard apple season is back in markets with varieties and price caps. The price ranges from Rs 300 to Rs 500 a kg and the imported varieties such as the ‘Graviola’ are costlier – from Rs 500 to Rs 1,200, depending on the size.

Fruit sellers, especially in the Puranapul flyover area, have a reason to rejoice. The sale of custard apple has picked up pace over the last few days. Fruit baskets stacked with custard apples have been drawing the attention of everyone passing through this bridge. Many motorists can be seen halting at this place to pick up a basket or two.Vendors -local and from dif ferent parts of the districts -have thronged the area to sell the seasonal fruit.

“Seasonal fruits last only for a few months. So, I have come here to buy raw custard apples as they are affordable and you get the best bargain at this place. I will make the raw fruits that I have brought from here ripe by keeping them in a sack for a couple of days,” said Mastanwali, a buyer.

Custard apples are here. With the season of the custard apple – commonly called sitaphal — beginning, vendors from nearby villages are in the city, pushing their carts and selling the juicy fruit at every nook and corner.

The fruit is known to have medicinal qualities and used in treatment of ulcers, blood disorders and hypertension, among others. This, apart from the taste, has seen the fruit being a popular buy this season, says Hussain Mohammed of Lucky Fruit shop in MJ market in Hyderabad.

“The season for custard apple is from August to October, but in Telangana the fruit hits the markets mostly after Vijayadasami (Dasara). The custard apples come from Rajahmundry and Bengaluru to MJ market. The prices will skyrocket in the early phase of the season but, dips by the middle of the season,” says S Ajay Kumar, another vendor at MJ market.

“Custard apples also come to city markets from the agency areas of Adilabad district, Kalwakurthy, Achampet and Jadcherla in Nagarkurnool district, and also from villages on the city outskirts,” officials in Gaddiannaram fruit market, Kothapet, said.

However, despite the interest of the buyers, the sellers have a complaint -compared to last year, the price of the fruit has come down marginally this year. The vendors feel that this has happened because a lot of custard apples are flooding the market.

The price of a basket of custard apple (consisting of 17-18 fruits) ranges from `100150, depending on the size.Smaller sizes of the fruit are also available, that are sold between Rs 80 and Rs 100 per basket.
One of the vendors from Shamshabad said that a group of 25 vendors had arrived at Puranapul with these seasonal fruits.

“We have come from Shamshabad to sell this seasonal fruit. Many people passing through this route stop and buy raw as well as ripe fruits. The prices depend on the size of the fruits,“ said Bujji, one of the vendors.

The steep fall in the price of custard apple (seetha pazham) due to bulk arrival from Andhra Pradesh and Javvadhu hills is a matter of concern for the farmers of Arunutrumalai hills in Vazhappadi block.

But the rains in the recent past in Arunutrumalai Hill and other parts of Salem district has increased the fruit production.

The harvesting season commenced recently and the farmers transported the fruits to various parts of the State and also to Thiruvananthapuram in Kerala. The price of the custard apple stood between ₹30 and ₹ 40 per kg till October-end, much to the joy of the farming community.

Meanwhile, the production of custard apple also increased in Andhra Pradesh and Javvadhu hills and these started arriving in bulk in Salem district in the last few days. This has led to steep fall in the price of the fruit in the local markets. Of late, the fruit is fetching a paltry sum of ₹15 per kg.

A cross section of the tribal farmers said that the price was so meagre, that they would not be able to meet even the transportation cost. Now the farmers are harvesting only big and quality fruits and transporting them to the markets in the plains, avoiding the small fruits. The traders too do not evince interest in procuring small fruits. The left out small fruits wither, causing financial loss to the farmers. The farmers say that they have no other option but to destroy the withering fruits. #KhabarLive #hydnews