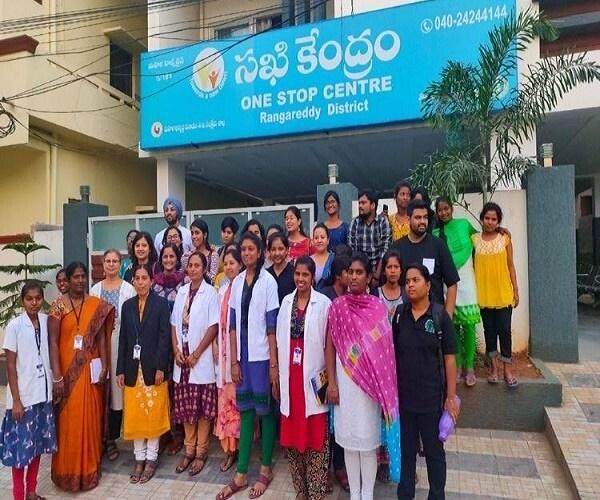 Neither does the place show up on Google maps nor is it easy to find a phone number. Except for a few media reports that announced the inauguration of the centre, the institution is almost as good as being non-existent on the maps of Hyderabad.

On the way to the big building that houses the centre, this reporter asked a female staff at a nearby nursing home for the way to the centre. She shook her head and said she has never heard of an institution by this name before. The next closest Sakhi centre for any woman living in Hyderabad is in Vanasathalipuram, almost 20 km away from the city.

On the fateful night Disha (name changed) was raped and murdered by a gang of four lorry drivers, the young woman, sensing danger, chose to call her sister instead of the police. Despite the state running 24X7 rescue centres for women, Madhuri, like most women in the city, decided it was best to confide in her sister than rely on the government machinery for help.

A week after Disha’s death and seven years after the brutal murder of Nirbhaya in Delhi, very little has been done by the Centre and state to help women in crisis. With only a few publicity campaigns, the women in Hyderabad are still unaware of how to reach out to resource mechanisms that can lend a helping hand in times of crisis.

The Nirbhaya fund was a Rs 1000-crore package which was announced by the Central government in 2013 after the brutal murder and gangrape of Nirbhaya in 2012. The Centre started distributing money under this scheme beginning from 2014, which led to the setup of Sakhi centres.

Though the Central government claims to have distributed funds from 2014 onwards, state authorities with the Women and Child Welfare Department in Telangana say that money started flowing in only towards the end of 2017. Centres were only opened in nine districts in 2015, but many shut down due to staff crunch and inability to pay salaries.

According to a senior government official working with the Women and Child Welfare Commission, the Centre took a couple of years to assess the performance of the Sakhi centres before it started allocating funds to build better infrastructure. It wasn’t until 2018 that centres opened across the state.

“In fact, most of the Sakhi centres in the state started only in 2018, after we started receiving regular funds from the Centre. Today, there are 33 centres, with at least one centre in each district of Telangana,” the official adds.

In contrast to media reports that claim funds towards protection of women are under-utilised by government, the official says that the state government has been pitching in Rs 20 lakh in addition to the Rs 35 lakh provided by the Central government to each centre in a year.

“There is a lot of red-tape which delays the distribution of funds every six months. The state is allowed to send its Utilisation Certificate (UCs) only after complete exhaustion of funds. For the next round of funds to get approval, it takes another 3-4 months during which the state spends from its own pockets for the upkeep of the Sakhi centres,” the official notes.

As of December 2018, the state has received Rs 1393.43 lakh from the Centre of which Rs 745.46 lakhs have been put into use. The figure roughly translate into an approx 53% of total funds allocated by the government.

“The rest of the amount has been earmarked for construction of buildings. Most of our centres operate out of rented buildings, the costs of which the state government bears. Due to lack of undisputed land and legal issues, we are facing trouble in putting the funds into use,” the official adds.

However, despite fund allocation and better infrastructure at centres, there have been negligent efforts from the side of both Centre and the state to create awareness of the Sakhi centres.

Officials at the Women and Child Welfare Department note that no separate funds are allocated for publicity or campaigns to spread the word and create awareness among women. Barring a few posters and advertisements that were initially put up, the Sakhi centres even fail to have a digital presence.

There are no helpline numbers that can aid women without Internet access reach the centres in each district. Dialling 181 might help, but again there are service providers (for example Vodafone) which do not recognise 181 as a toll-free number.

Staff at the Sakhi centre notes that around 500 cases are registered in a month, with roughly around 10-15 cases per day. The counsellor who spoke to #KhabarLive said the staff is paid on time and that on a few days, they may register as few as 4 to 5 cases.

ALSO READ:  Telangana Congress Leaders Break Out In Fisticuffs Over Chair In Hyderabad

However, the lower number of cases does not mean a decrease in violence against women, Ekta Verma, a women’s rights activist, notes.

“A case in contrast is the Bharosa Centre, run by the state and SHE teams, which has a wider reach among women in Hyderabad due to its publicity campaigns. There are three Bharosa centres within Hyderabad. They work with corporations, civil societies and have a definite social media presence. Civil societies help you reach out to a large number of women who suffer in silence and are looking for a support system. The Sakhi centres do not provide a guarantee or establish a relationship with women in assuring that their problems would be heard,” Ekta says.

However, officials note that Sakhi centres have better roles to play in rural districts when compared to cities like Hyderabad where population density is higher and reaching to every nook and corner is difficult. In rural areas, the centres are proving to be more effective due to wider reach and publicity, they claim.

“Whatever little campaign we have been able to do is with the help of funds provided by the state. After the rape and murder of the veterinary doctor last week, we are now in talks to recruit young minds to create a social media presence and also put up advertisement in public places like metro.

But this again is a lot of money which has to be sanctioned by the state. Concrete ways to establish our presence can be achieved when there is adequate allocation of funds and the Centre takes note of this,” the senior official notes. #KhabarLive