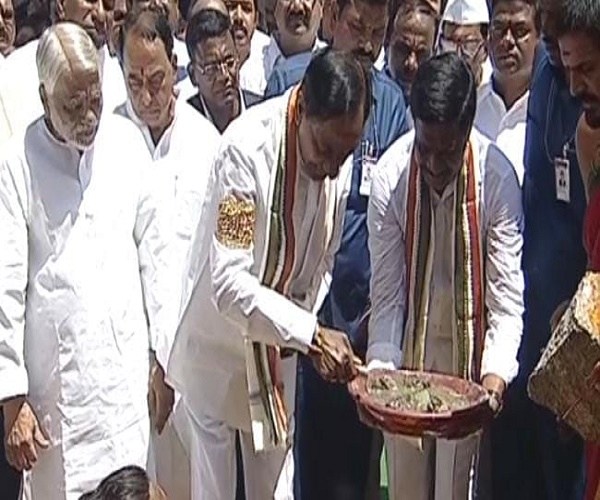 Notwithstanding protests from the opposition parties and the heritage conservationists, Telangana Rashtra Samithi president and chief minister K Chandrasekhar Rao went ahead with the ground breaking ceremony for the new secretariat and legislature complexes at two different locations.

At 11 am, KCR laid foundation for the secretariat complex behind the existing D block in the existing premises amidst chanting of Vedic hymns. Ministers and other elected representatives including MLAs, MPs and MLCs attended the ceremony.

At around noon, the chief minister laid the stone for the new integrated Legislative Assembly complex at Errum Manzil.

The ceremony was held at Jalasoudha in front of the ENC irrigation office. The new legislative assembly will house the assembly, council halls and central halls.

The new secretariat is being built in about four lakh square feet with an estimated cost of Rs 400 crore. On the other hand, the cost of the new assembly is expected to touch Rs 100 crore.

The moot question here is whether the Telangana, which is facing severe financial crisis now, requires a new Secretariat and assembly, when the present Secretariat and Assembly buildings are in good condition.

Regarding Secretariat, Andhra Pradesh has recently vacated and handed over buildings under its occupation also in Hyderabad.

Now, it is a huge and spacious premises with more than enough space to run the administration of Telangana State.

Similarly, the state assembly is also in a very good condition. Till five years ago, it hosted assembly sessions with 294 members.

Now, there are only 119 members. Moreover, it was beautified and renovated sufficiently in the last five years.

At the same time, the assembly sessions are hardly held for 60 days in a year in three seasons. So, is it necessary to have a new assembly for such a small period?

Telangana is facing many other problems like bad roads, insufficient drainage system, water logging and traffic jams. Why can’t Telangana government focus on them? #KhabarLive