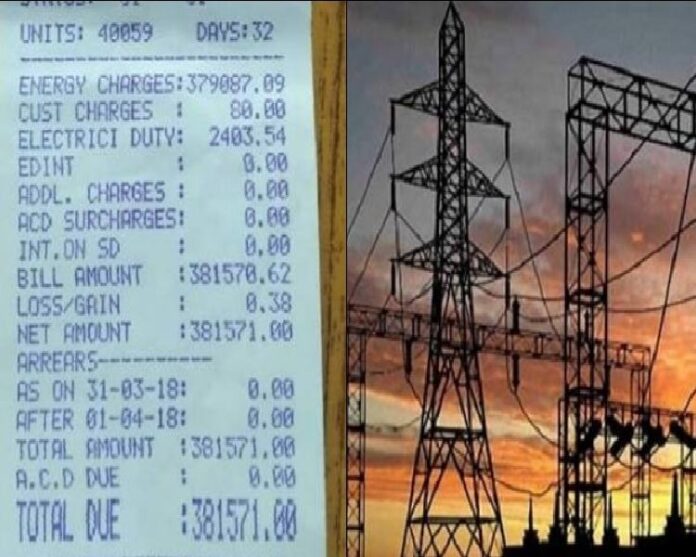 During the pandemic with increasing inflation and decreasing incomes to a common man in these days, domestic power bills, with enhanced ‘true up’ charges, have delivered high-voltage shock to the common man in Andhra Pradesh.

The additional charges are being collected from people for their power consumption in previous years.

The Electricity Regulatory Commission (ERC) has caused this ‘storm’ by allowing discoms to collect additional charges from consumers to the tune of nearly Rs.4,000 crore in a continuous process that may last eight months.

In fact, discoms had proposed the collection of additional charges to the tune of Rs.19, 000 crore.

But ERC denounced that proposal and gave its nod for collecting Rs 3,700 crore. Consumers were aghast when they received their domestic power bills for August including a minimum of Rs 400 as additional charges on every connection, even if the consumer had consumed less units than in the previous months.

This unexpected additional burden has affected even those sections which had happily benefitted from the welfare schemes of state government.

Tenants are clueless about how the authorities would deal with them due to the unusual enhancement of domestic power bills as the discoms have decided to collect additional charges for past consumption as well — for the period of 2014-19.

There are many tenants who may be required to pay true up charges even if they have not been tenants during the entire period of reckoning. Clashes are likely between owners and tenants in some cases.

The ERC initially used to elicit the opinions of members of registered political parties in the state.

The parties used to send members well-versed in the subject.

Former chief minister of undivided AP K. Rosaiah, CPI-M politburo member were among those who have attended such meetings. But these leaders often cornered the ERC on several issues, including revision of power tariff, on various occasions. Unable to digest such criticism, ERC has stopped the exercise, but is not averse to acting against the interests of power consumers in the state.

The state government decided to stop ERC interactions with members of opposition parties, mainly because of the fall-out of media coverage of those proceedings.  It is only a matter of time before opposition parties and civil society organizations begin to make the most of public anger over the true up charges.

Twenty one years ago, then Chandrababu regime revised power tariff and put a huge burden of additional charges on people.

Then Opposition, led by Congress party, launched an agitation with the support of Left parties in the state. The Congress Legislature Party was then headed by Dr.YS Rajasekhara Reddy, with a strong contingent of 91 members — the biggest ever opposition in the state Assembly since its inception. That fierce agitation culminated in an indefinite hunger strike by 90+ MLAs of the entire Opposition in the Assembly. A flare-up of that protest resulted in police firing at Basheer Bagh in Hyderabad on 28 August, 2000.

The police opened fire when a rally organised by all opposition parties proceeded to the venue of the MLAs’ hunger strike. Three activists were killed in the firing that shook the entire state politically. That was the beginning of the end of Chandrababu Naidu’s rule in the undivided state.

The opposition acted in perfect unity and sustained the negative mood of people towards then TDP government in subsequent years. Finally in 2004, the TDP was decimated.

The TDP had to sit in Opposition benches for two consecutive terms of 2004 & 2009. The TDP came to power in the residuary state of AP only after spending 10 agonising years in the Opposition.

However, in the present circumstances, the principal opposition party – TDP, under the leadership of Chandrababu Naidu, does not have enough strength in the legislature to take on the YSRCP government headed by YS Jaganmohan Reddy.

He has to launch an effective agitation against the true up charges.

None of the YSRCP MLAs can afford to side with the public. The attempts being made by some ruling party leaders to blame the Chandrababu Naidu government for the present hike in power charges do not hold water.

In fact, the severity of the burden on people in the name of true up charges is much more than that which the TDP regime had imposed on people in those days. Some say the ‘sin’ committed by the TDP regime in the combined state of Andhra Pradesh is still haunting the party in the residuary state. Chandrababu then tried hard to crush the agitation against the hike in power charges.

In those days, Chandrababu, with his 29 members in the Lok Sabha, was the darling of media, particularly after he extended crucial support to the NDA government headed by AB Vajpayee.

Chandrababu did not tolerate democratic voices against him, particularly after he retained power in the state by forging an alliance with BJP. In the backdrop of the Kargil war, Vajpayee’s image helped Chandrababu retain power in combined AP.

These days Chandrababu prefers to send his son Lokesh to those places where his presence is not warranted. He made a vain bid to go to Guntur district to visit the home of a rape victim, but the police foiled his efforts. This brought some political mileage to TDP.

Aside from TDP’s present capability to lead an agitation against the hike in power charges, it appears that the widespread resentment among the people could work against the state government.

The manifold increase in power bills caused by the true up charges would be too heavy a burden on the common man.

It is different matter if he gets welfare benefits worth thousands of rupees from the government.  The feeling of gratitude towards the government for its freebies may not last long.

People may respond to the calls of the principal opposition party if they feel that there is need for an agitation to ensure the rollback of true up charges. #KhabarLive #hydnews